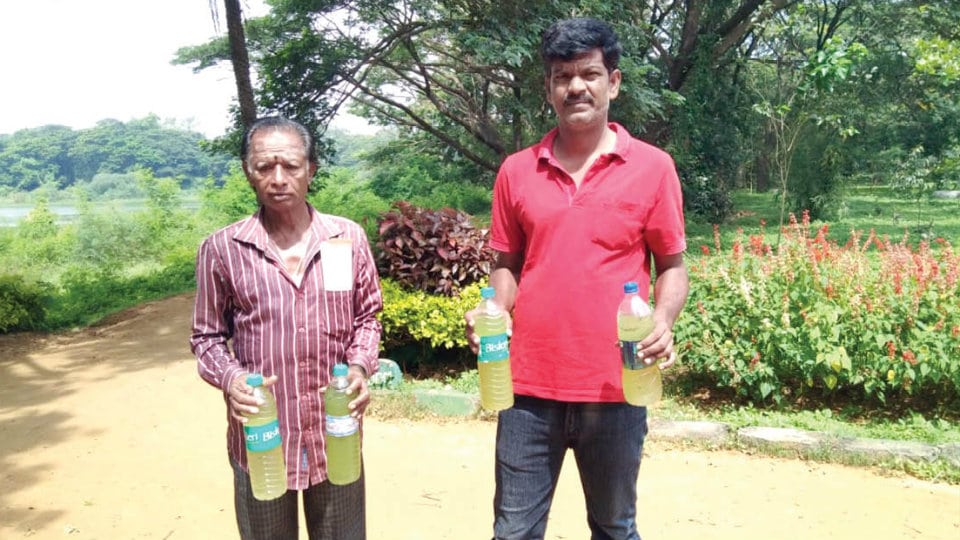 Mysuru: Following a Spot-Billed Pelican’s death at Kukkarahalli Lake, officials from the Karnataka State Pollution Control Board (KSPCB) visited the Lake this morning and collected the water samples in the area where the Pelican had died. The water is smelly and greenish in colour and four bottles have been collected which will be sent to the KSPCB Laboratory in Hebbal.

Pollution Control Board Officer Geetha told SOM that earlier too when the Kukkarahalli Lake was frothing in July this year, the KSPCB bad collected water samples and had declared that the Lake water was polluted due to uncontrolled sewage flow.

“We had prepared a detailed report and had sent it to the University of Mysore that is the custodian of Kukkarahalli Lake and the District Administration and we had mentioned the steps to be taken to clean the polluted Lake and bring in fresh water,” she said.

The Kukkarahalli Lake does not have a fresh water inlet and the water there is stagnant. Also, sullage water from the surrounding populated areas enters the Lake, making it smelly. This pollution infects the bird population that roost on trees surrounding the Lake and also threatens the fish population, the main source of food for birds, say the bird-lovers.