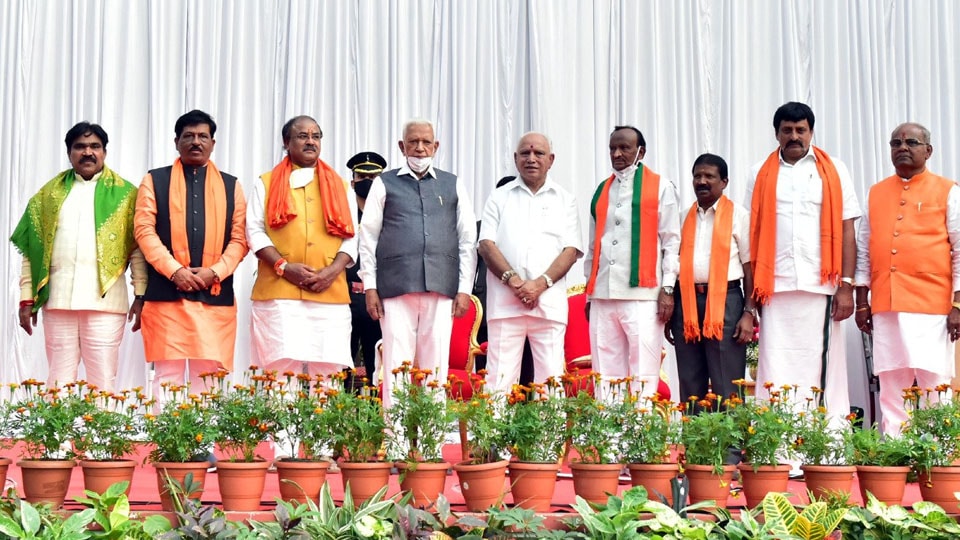 Bengaluru: A week after seven Legislators were inducted into his Cabinet, Chief Minister B.S. Yediyurappa allotted portfolios to them after a minor reshuffle of portfolios among his other Cabinet Ministers.

As per the list of portfolios sent to Raj Bhavan which was given assent by Governor Vajubhai Rudabhai Vala this morning, Umesh Katti has got Food, Civil Supplies and Consumer Affairs, S. Angara has been allotted Fisheries, Ports and Inland Transport, Aravind Limbavali – Forest, Murugesh Nirani – Mines and Geology, MTB Nagaraj – Excise, R. Shankar – Municipal Administration and Sericulture and C.P. Yogeeshwar has been allocated Minor Irrigation portfolio.

Soon after the portfolios were allotted, the first rumbling within the Cabinet began with Minister J.C. Madhuswamy expressing his displeasure over the change in portfolio. He has been shifted from Law and Parliamentary Affairs to Medical Education Department and Kannada and Culture Department.

“I am unhappy over portfolio allocation but I have not yet decided to tender my resignation. I had expected a different portfolio though Medical Education is a good responsibility. It would have been better if I had got a portfolio that enabled me to work amidst people,” he said.

As expected, Yediyurappa has retained Bengaluru Development portfolio as four Ministers, who represent different Assembly Constituencies in the tech capital, had lobbied hard for the prestigious portfolio. Bengaluru Development has assumed political significance because of the upcoming elections to Bruhat Bengaluru Mahanagara Palike (BBMP).

There has been a competition for this particular portfolio and Deputy Chief Minister Dr. C.N. Ashwathnarayan, Revenue Minister R. Ashok and Housing Minister V. Somanna were vying for it. Ultimately, Aravind Limbavali, a voice of the SC community who has strong backing of RSS, had emerged as the frontrunner for Bengaluru Development.

To get this coveted portfolio, two Ministers had approached the party top brass and RSS while the other two made their case before the CM and his influential son B.Y. Vijayendra. But finally, CM Yediyurappa has retained the portfolio for himself.

The seven Ministers who were allocated portfolios today had joined the Yediyurappa Cabinet on Jan.13. While Umesh Katti, Murugesh Nirani, S. Angara and Aravind Limbavali are MLAs, MTB Nagaraj, R. Shankar and C.P. Yogeeshwar are MLCs. The new list of Ministers and their portfolios is as below: