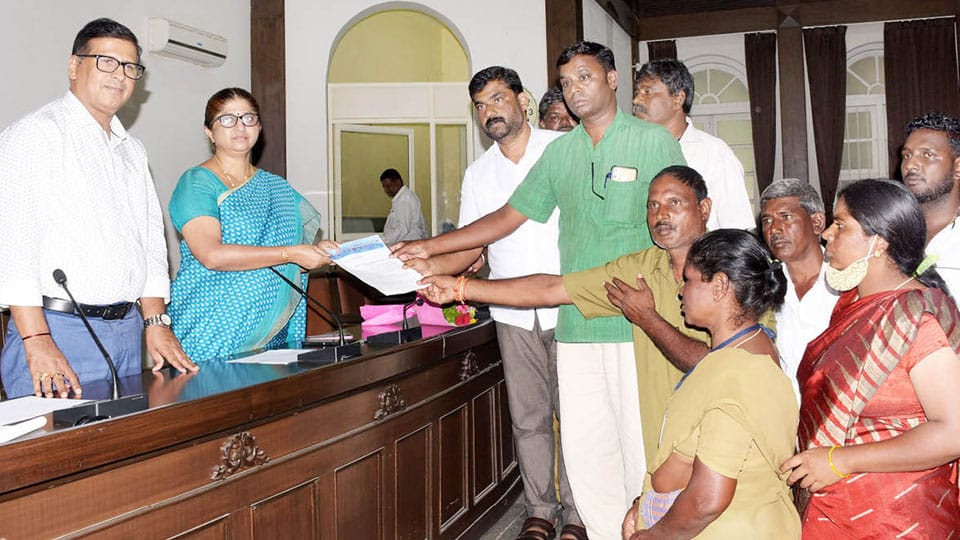 Mysore/Mysuru: Maintaining that most of the issues concerning Pourakarmikas have been addressed, ZP CEO B.R. Poornima said that vacant Pourakarmika posts in Government Departments will be filled up  in a few months. She was speaking at the Pourakarmika Grievances Meet held at the ZP Hall here on Wednesday.

Soon as the meeting began,  Pourakarmika Association President D.R. Raju said that there are 323 Pourakarmikas serving in 256 Gram Panchayats of the district. Maintaining that the Pourakarmikas are serving overtime, he alleged that most of them are not getting timely salaries despite doing hard work all throughout the day. Noting that only 95 Pourakarmikas are on regular rolls, while the rest 228 are serving on contract basis, Raju wanted the Government to treat Pourakarmikas as Corona Warriors and give them due facilities.

Raju also sought issuance of Title Deeds to Pourakarmika house owners residing atop Chamundi Hill for the past 40 years.

The ZP CEO said that the 1993 Panchayat Raj Act has stipulated Pourakarmikas based on the population of local area. The resolution passed at this meeting regarding appointment of Pourakarmikas will be forwarded to the Government, she said adding that the Government will also be sought on changing rules regarding Pourakarmika-population ratio. She also directed the officials to identify Government land coming under the nearest Gram Panchayat if houses cannot be distributed atop the Hill.

ZP Deputy Secretary Dr. M. Krishnaraju said that Pourakarmika children should utilise all Government benefits and get higher education. Asking the Pourakarmikas to use safety gears while on work, he called upon them to get regular health check-ups at PHCs.

The Pourakarmikas also submitted a memorandum to the ZP CEO that contained their charter of demands.