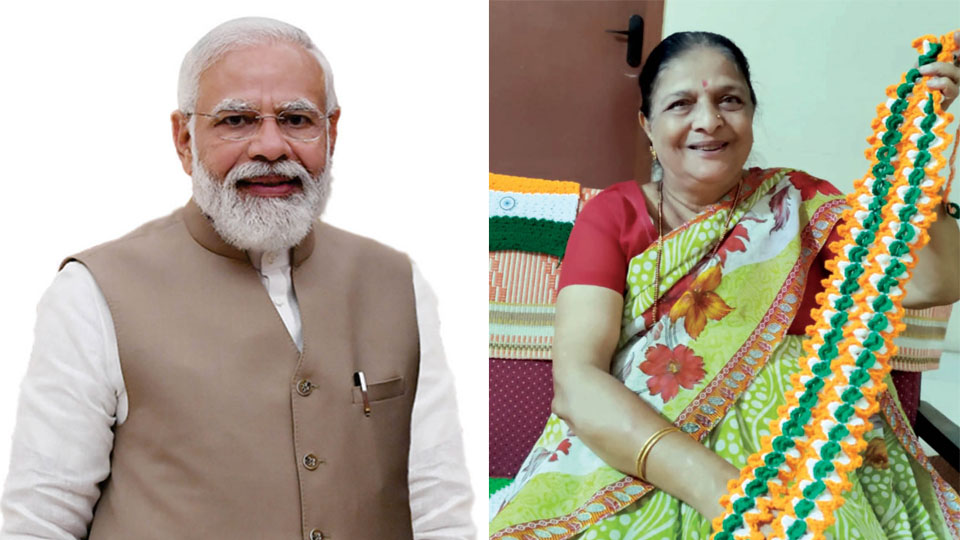 Dr. Manik A.V. Bengeri of Mysuru commemorated the 75th year of India’s Independence in a novel way last month. Well-versed in the art of crochet, this septuagenarian decided to make use of her skill to not just exemplify her patriotism and salute our soldiers but also generate funds for the Army through her skill, in a small way.

So she herself crocheted items such as National Flags, key chains, badges, car hangars, garlands, wrist bands, rakhis — all in the colours of our National Flag and complete with the Ashoka Chakra.

The true patriot that she is, Dr. Manik Bengeri, besides distributing the hand-made Tricolour Flags and wrist bands to her friends and well-wishers in Mysuru, also packed a few boxes with these items and sent them by Speed Post to the  President of India, the Prime Minister, Defence Minister, Army Chief and a few other VVIPs with a covering letter wishing them on the occasion of Azadi Ka Amrit Mahotsav and Raksha Bandhan (Aug. 12).

Surprisingly, a few days ago she received a letter written in Hindi from Prime Minister Narendra Modi by Speed Post thanking her for the gift box which also contained a rakhi, symbolising the sacred relationship of brother and sister.

The letter in Hindi by the PM is published here along with the English translation of the same:

Thank you very much for sending rakhi on the auspicious occasion of Raksha Bandhan. This affectionate expression of yours on the festival that deepens the eternal bond between the brother-sister with the sacred thread of affection has filled me with new energy to continue working for the nation.

This year’s Raksha Bandhan has made the Azadi Ka Amrit Mahotsav more special when India of the 21st century is heading towards nation-building with new resolutions.

In the next 25 years of Amrit Kaalkand, when India will celebrate its centenary year of Independence in 2047, the role of women power will prove to be very important in building a grand and self-reliant India. I believe that you will make a significant contribution with your efforts for the betterment of the country and society and will continue to inspire others as well.

Wishing you good health and a bright future.

Note: Dr. Bengeri had also written a series of articles under the title “Azadi Ka Amrit Mahotsav: 1947-2022 — Saluting Brave Army Officers” in ‘Star of Mysore’ in the month of August. —Ed