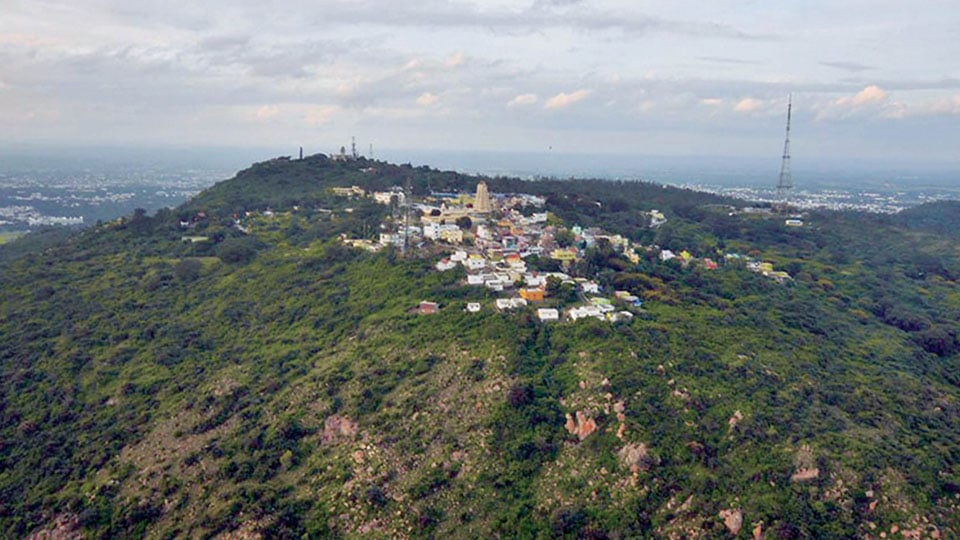 PRASHAD or Pain for Chamundi Hill ?

There was another landslide on Chamundi Hill yesterday. If this weather pattern of incessant rain continues for a few more seasons and as more and more water is held in the soil, there will be many more landslides on the Hill in the coming years.

In the meantime, we devotees can’t help but worry a little, wondering if the land under our feet will slide as we visit Goddess Chamundeshwari for her darshan and prasad. But it seems the Government is confident that all is well and is ready to bless us with its PRASHAD.

All Governments love acronyms and the Central Government has a perfect one for temples — PRASHAD — Pilgrimage Rejuvenation And Spiritual Heritage Augmentation Drive (PRASHAD). Phew! It feels like reciting a long mantra!

The Centre has chosen our Chamundeshwari Temple atop Chamundi Hill to be “developed” under this scheme. One would say that’s good news. But whenever we hear of development on the Hill, we get worried. And we have a good reason, too, considering the slow growth of concrete jungle on the hilltop.

There was an advertisement in Star of Mysore recently by Mysore Grahakara Parishat (MGP), the NGO that deals with consumer issues, requesting people to sign a petition on change.org to “Save Chamundi Hill.” But the petition failed to mention “Save Chamundi Hill from what specifically?” From PRASHAD, it said. But…

First, people need to know what is PRASHAD and what plans it has for Chamundi Hill.

The PRASHAD scheme says that it “offers a tremendous opportunity to undertake infrastructure developments at important pilgrimage and heritage destinations in an inclusive, integrated and sustainable manner that focuses on livelihoods, skills, cleanliness, security, accessibility and service delivery.” We wish there was “eco-sensitive” too in there somewhere. But thankfully “sustainable” has found a place.

Initially, i-DeCK, the State Infrastructure Company gave a proposal but it was rejected by the Centre. But now a Bengaluru-based Architecture Company has submitted a concept note which the Government has agreed to review. That is all. And already protests are being called for.

But is it protest worthy yet, considering it is still a concept note and local stakeholder meeting has not been called yet?

The  concept note sounds very grand and has too many ideas it wants to implement. It proposes: Putting up traditional structures where vendors are already selling temple-related goods; Developing the “precinct of Mahabaleshwara,” the temple next to the main one; Improving the path and access to Narayana temple precinct, which is also close to the main temple; Repairing the Dibbana steps; Setting up a Bhajane centre where the old parking lot near the temple now sits. Also, there is a grand entrance that will lead to the temple from the Mahishasura Statue.

There is even a bold claim that the “Existing disorganised, commercialised precinct” would be converted into a “Sacred Complex.” What does this even mean? God only knows.

Then the plan includes improving the Nandi area, adding a few rest-stops with water and toilet facilities along the hillsteps, highlighting the importance and heritage value of religious structures which are found as one climbs the steps, installing handrails, reviving Devikere, putting up changing rooms there, accentuating the gateway to the temple precinct at the foothills, provision of centralised ticketing centre at the foothill, smart parking on the hill which indicates parking spaces available.

The proposal has the Inner and Outer Precinct concept. In the Outer Precinct, which is the space outside the core hill temple area, there will be an Elderly Care Centre, a Facility for Women and Child Care, Resting places, a Facility Centre for drivers, Hazard Alert and Rescue Centre.

The Inner Precinct, the core temple area, will have a Drinking water facility, Resting place along the walkway to temples, Toilets and Washrooms with locker facility, Space to chant and meditate, Silent Zones etc… the list goes one.

It also talks about ways to handle garbage and sustainability such as Provision of centralised Waste Management system, Smart bins, Segregation area and even proposes a “ZERO waste temple campus.” It talks about providing Solar enabled lighting, Water recharge and collection pits and Recharging the historic wells and reservoirs. It then talks about beautification of View Points using traditional style of architecture etc…

While many of these services are meant for devotees and are indeed helpful, some seem unnecessary and unrealistic. First, the Narratorium.

What is Narratorium? Well, it’s a place where stories are told using objects and narration. And there is a proposal to build a Narratorium which tells the story of the Wadiyars of Mysore etc. This will come up at the Entrance Arch at the foothill.

Also close to the Narratorium, there is a proposal for Ecology Conservatory and Tree Species Museum where inherent plant species which are present in the hill ranges will be exhibited as a live tree museum within a green-house.

The proposal is extensive and almost seems “fantasy” like. We say fantasy because it leaves one wondering can all this be built with just Rs. 40 crore?!

Our guess is that our Government has indulged in an old trick — Give an over-estimated proposal so they get enough money to at least execute 20 percent of the proposal. And if this 20 percent includes clean toilets, structured pathways around the temple and basic beautification, then there is no harm. Looks like this is what is going to happen.

So let’s provide basic service to devotees; there is no need to turn it into a commercial hub. Maybe with Rs. 40 crore, we can have a clean, structured temple complex with basic services. And that’s enough.

For now, the signature campaigns have begun as it should. But more importantly, Mysureans  must and should participate when the local stakeholders’ meeting is held soon. Here we must question the project’s scope and express all our fears about unscientific development, if any, that will make our Hill very ill turning this PRASHAD into pain or worse poison!?