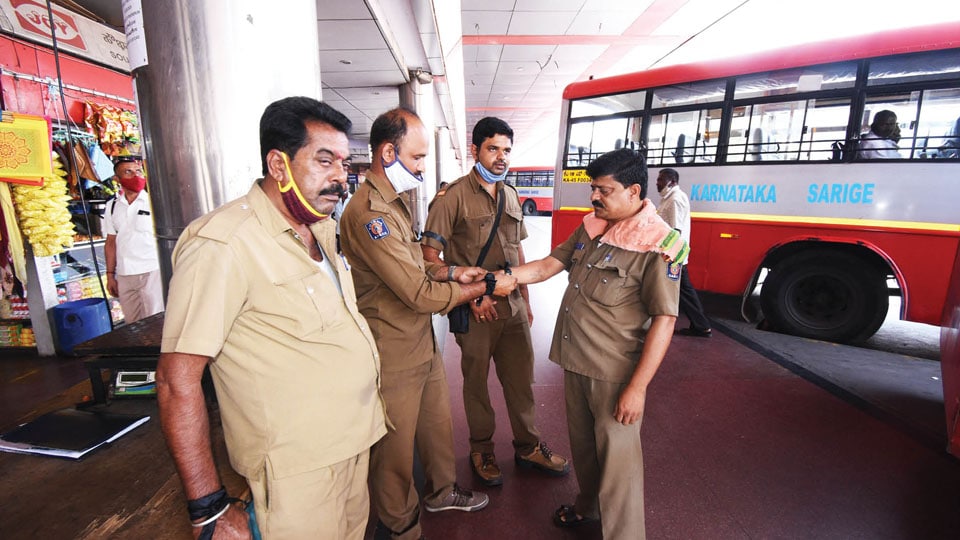 Prelude to indefinite agitation from Apr. 7

Mysore/Mysuru: The KSRTC staff, who have threatened to launch an indefinite stir from Apr. 7 if all their demands, which chiefly included implementation of the recommendations of the Sixth Pay Commission, are not met by then, sold coffee, tea, bondas and other snacks at public joints and junctions today on the second day of their week-long protest, in order to draw public attention to their demands.

Yesterday, on the first day of the protest, the KSRTC staff and workers reported for duty at the City and Sub-urban bus stands   by wearing black bands, which drew the attention of commuters and other members of the public.

Earlier this week, the KSRTC Staff and Workers Federation had said that the employees would undertake different modes of protest from Apr. 1 to 6 as a prelude to the indefinite strike called  from Apr. 7.

Meanwhile, KSRTC Employees Federation Hon. President Kodihalli Chandrashekar has reiterated that the staff of all the four State-run Transport Corporations — KSRTC, BMTC, NWKRTC, NEKRTC — will go on a strike from Apr. 7 if all their demands are not met by then.

Addressing a meeting of Mysuru-Chamarajanagar-Mandya  Divisions KSRTC employees at Town Hall here recently, Kodihalli Chandrashekar said the Government must meet the 9-point charter of demands, which chiefly included implementation of the recommendations of the Sixth Pay Commission for KSRTC staff.

Asserting that 1.30 lakh workers of the four RTCs will strike work from Apr. 7, he said that the employees will stage different modes of protest from Apr. 1 to 6 in order to draw the attention of the public and the Government to their demands.

READ ALSO  Fly on the Road

Maintaining that the Government had promised to consider Sixth Pay Commission recommendations when the employees had staged a strike in December last, he said that the strike was then withdrawn as the Government had sought three months time. But as the promise has not been fulfilled, the KSRTC staff have no alternative other than go for an indefinite strike, he contended.

He also asserted that the employees were not to blame for the mounting losses suffered by the Transport Corporations.