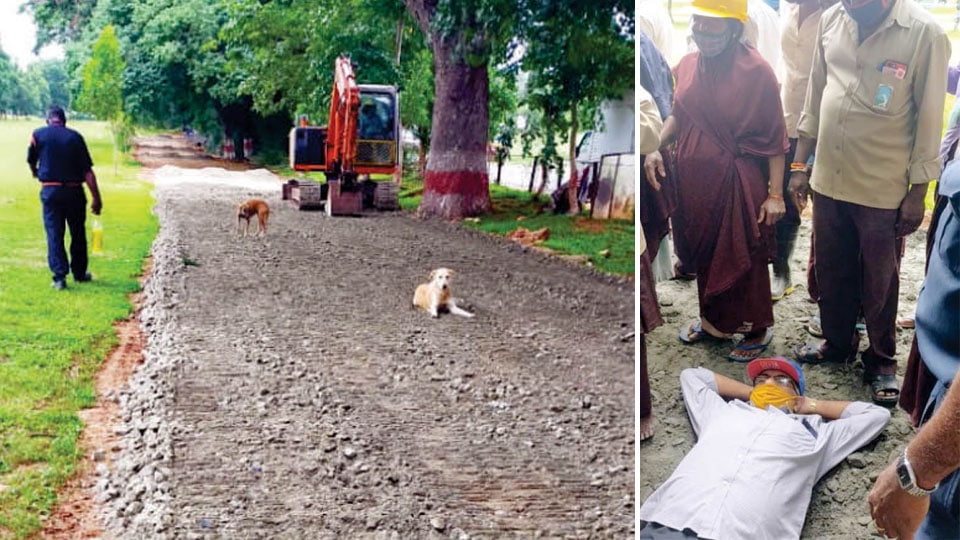 Mysore/Mysuru: The road concreting works inside Mysore Race Course land undertaken by the Golf Club (JWGC) without permission from Mysore Race Club Ltd. (MRC), was stopped yesterday by a novel protest by a Member of the MRC.

According to MRC, the JWGC has only a right to use the MRC Golf Course, inside the MRC land, for playing golf under an MoU but has no right to tamper with the land taken under lease from the Government of Karnataka.

Thus when JWGC opened a separate gate of its own to enter the Golf Course, MRC went to the Court and filed a case. The case is posted for 28th August 2020, it is learnt.

However, pending the case the JWGC began work on laying a concrete road inside the Golf Course without permission from the MRC.

When JWGC did not stop the work despite objections from the MRC, reminding them of the pending Court case, as a last resort a senior member of MRC H.K. Ramesh, who is also the Member of the Managing Committee, went to the work spot, stood before the road-roller and then laid himself flat in front of the road-roller preventing it from moving forward.

Ramesh alleged that the JWGC was violating rules in taking up the concrete road works on MRC land.

Following the protest, MRC filed a complaint at Nazarbad Police Station and the Police on visiting the spot directed the JWGC to stop the work.

The MRC members said that to prevent JWGC from carrying out such works permanently, the MRC had approached the Court and after hearing the case, the ruling has been reserved for Aug. 28, 2020.

This development notwith-standing, the JWGC had hurriedly taken up the works to lay the concrete road and summoned 10 to 20 workers including women, two earth-movers and a road-roller to carry out the works, the MRC members alleged. Now the works have been stalled and the MRC security staff have been posted at the work site.