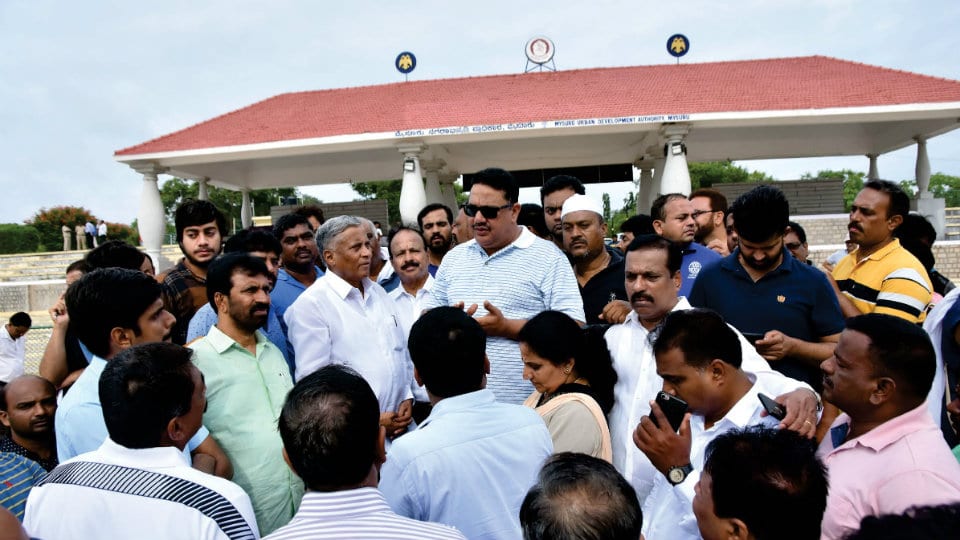 When the Minister arrived at the ground, MLA Tanveer Sait, who represents NR Constituency, was also present. The MLA appraised the Minister about the problems being faced by the public who come in large number to watch the mega event.

He said that previously a proposal of Rs.30 crore had been submitted to the State Government for the construction of shelter around the ground to ensure the public do not get drenched in case of rain during the Torch Light Parade.

Stating that the ground was only being used during Dasara, Sait suggested that the ground could be converted into an international-level stadium instead of keeping it vacant throughout the year.

To this, Minister Somanna said that he would look into the matter and added that a meeting will be conveyed after Dasara to discuss on the issue besides appraising the Chief Minister regarding the pending proposal.

The District Minister also instructed MUDA Commissioner P.S. Kantharaju to make sure arrangements were up to the mark for the Torchlight Parade without giving scope for any confusion during the event. He also instructed the City Police Commissioner K.T. Balakrishna to ensure adequate security was in place at the ground since Governor, CM and other VVIPs would be present.

The Minister also instructed the Police Chief to make sure the traffic was cleared for VVIP movement on the roads leading to Torch Light Parade Ground.