Home » Feature Articles » Pt. Rajeev Taranath: A Sarod Maestro and a Legend in our times-2 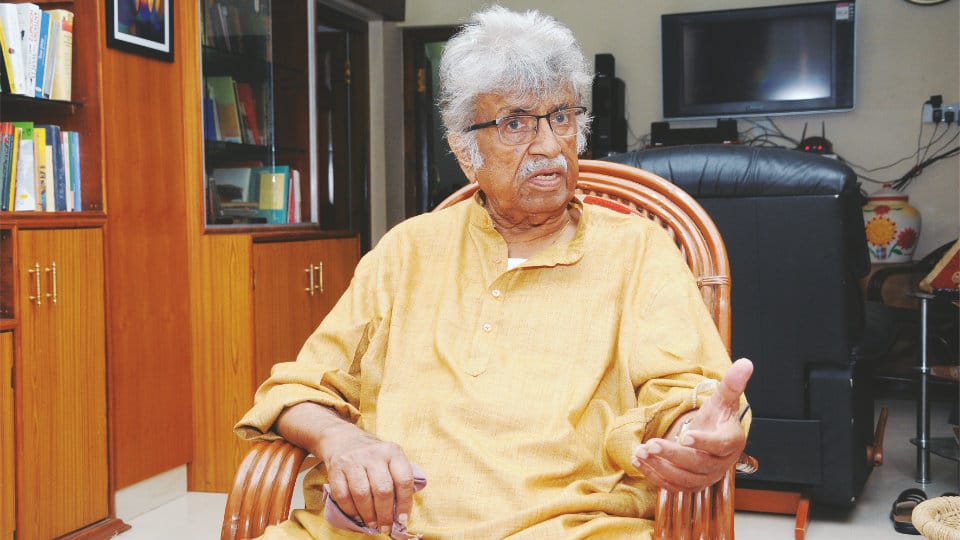 Pt. Rajeev Taranath: A Sarod Maestro and a Legend in our times-2

Star of Mysore (SOM): So that is how your childhood was?

Pandit Rajeev Taranath: Yes, a part. I kept myself busy with books than what the other boys of my age did; they played some game or something. I also played, but my mother got me back home and kept me with my books. I was a loner. I never went to school, I did not know anyone of my age. My companion was my father as along as he lived and after that it was my mother. My father’s and mother’s friends would come home. For example, there was a great man, a professor from Central College who was a Cambridge Wrangler, K.S.K Iyengar, bit of a mad person who taught Mathematics. He was a friend of my father. He came to learn music from my father but he could not sing for nuts; my father sang well,  that is when my father told him to learn from his son!

SOM: How old were you then?

Pandit Rajeev Taranath:  I gave my first performance at Kannada Sahitya Parishat. I sang, I did not know to play Sarod.

SOM: In which year was it?

Pandit Rajeev Taranath: Yes, in the year 1942, soon after my father died. I was ten then. My father died on Oct. 31 and I must have sung in the month of December. I had the public sympathy with me as a young fellow who was recently orphaned.

SOM: Your Mysuru connection is very strong. You studied and taught here. You were also the son-in-law of Mysore…

Pandit Rajeev Taranath: Yes, I did study here but I have more connections in Bangalore. I did my one year MA here.  I have told you I never went to school. I also studied my Intermediate and BA Honours at St. Joseph’s Bangalore. I was first appointed at Central College, Bangalore. U.R. Ananthamurthy and I were appointed on the same day.

SOM: You were also the son-in-law of Mysore?

Pandit Rajeev Taranath: Unhappy period. Let me put it in a metaphor — if there is milk and sugar they stay together, and if there is oil and shikakai, both are great. They are just not meant for each other. My wife was a very, very fine musician. And that is how I came to know her.

SOM: Because she was a musician you came to know her?

Pandit Rajeev Taranath: I lived with an aunt of mine in the out-house, while they were living in the main house. It is all like a Hindi film. I went to stay with my aunt though I had rented a house here in Saraswathipuram. She was in trouble with a son of hers and she wanted  me to stay with her. That is how I went and stayed there. And that is how I came to know this lady (later my wife). My aunt was a friend of hers. The lady already had a divorce and that is not a nice thing to do those days and in India it was considered to be very bad.  Then we got married.

That was a very bureaucratic family. Her father retired as the General Manager in the Mysore State Railways. Her mother spoke beautiful English, she was extremely well-read,  very different from others and she had been a roommate with my mother in Queen Mary’s College. They were Tamil Brahmins.  I wanted to get into music as a profession and they did not quite like it. They wanted me to have a steady job. So that is how I got back to teaching English.

I had come here from a very remarkable school in Calcutta, the South Point High School, where I taught English. I had got that job on the basis of my sarod and my certificate with BA Honours in English. It was a school which took people with right kind of qualifications plus something else; so Utpal Dutt, the great theatre and film actor, a wonderful person and myself taught English there.

They wanted me to do my MA.  So I went to the local University and when I went to the Registrar’s Office, I saw the Registrar was getting hammered. Students were running out of the examination hall, with the usual reasons that portions were out of syllabus. Then I asked M. N. Parthasarathy (Pachu), who was like a father to me and who was teaching in Maharaja’s College, whether I could do my MA in Mysore. He asked Prof. C. D. Narasimhaiah (CDN), who told Pachu to tell me to come immediately to Mysore as that was the last batch for one year MA and I came down. Prof. CDN  also got me my a job in D. Banumaiah’s College.

Pandit Rajeev Taranath: In the meanwhile, it was not good for the lady or me, as she was meant for another kind of life. She is an extremely good Sarod and Sitar player. To date she is my best student and I still consider her as my best student.

SOM: Are you still in touch with her?

Pandit Rajeev Taranath: Yes, when I go to the US I meet her.

SOM: Where else did you teach in Mysore?

Pandit Rajeev Taranath:I studied in the University and got the first rank and a gold medal, which I could not buy since I did not have the money. The price of gold medal had gone up; it was instituted by a man called Krishnamurthy Poorna. It was he who sent R. K. Narayan to England. He was vintage and now I am also vintage.

I worked on a temporary basis here. I got married and had a wife and non-existent job. Then I went away to Raichur to work in Taranath Education Society. Vishwanath Mirle, who was my contemporary, called me to go there. I taught there for one year. After that I got a UGC Fellowship and came back to Mysore. I took three years to write my thesis under CDN. I submitted my thesis. You know we are at the pleasure of the University — they sent it late for evaluation but still I am one of the early  Ph.D holders of this University in English.

SOM: Sarod is an instrument which you now worship. But you had a pronounced dislike for it. It came across as a staccato and harsh instrument when you heard it on 78 rpm record. What experience changed that opinion and made you take to it?

Pandit Rajeev Taranath: Well, it was when it was played by others and not my Guru Ustad Ali Akbar Khan Saab, whom I consider God. He appeared for the first time in Bangalore. Pandit Ravi Shankarji, who came every year to Bangalore, had strong Southern connections and one of his disciples, a Kannadiga, used to arrange these concerts in Bangalore, Mysore and in other places too. But Khan Saab had never come to South for his performances; he came along with Ravi Shankar for the first time. In fact, I wasn’t quite happy about it in the beginning. I didn’t know what was happening and then Khan Saab started playing around this time in the evening (6.30pm) and my whole life was transformed.

SOM: This was in which year?

Pandit Rajeev Taranath: Yes, it was in 1952. My only desire was to go to him and learn, otherwise, I was a very good student you see. What would a Humanities student do? One, become a teacher or do IAS. People expected me to do IAS because I had general information, I wrote well and spoke well. But my only desire was to learn the Sarod. This was long before my marriage. I went to Khan Saab and I was there for six years and only then did I come to Mysore. I just wanted to do my MA and go back.

SOM: To facilitate your riaz, you had to change 13 jobs. You resigned another job at 51 when you were teaching at Central Institute of English and Foreign Languages in Hyderabad.

Pandit Rajeev Taranath: That’s right. That was my last job.

SOM: How could you take so much of risk? Is it not madness?

Pandit Rajeev Taranath: Of course, it is madness, as long as you enjoy it… I have been in both the boats. You know I taught English, later did my MA and then got my Ph.D and all in ‘Khadi,’ no foreign degrees; my degrees are all from the University of Mysore. Then I did, I am doing music, there is no past tense in any performing art. You know when you think of performing art you listen very quietly and that is the ultimate test of honesty. I also wrote about people in English and Kannada. I know how so and so is great; in music, it is not like that.  How good are you? Come have a seat and then you are on the stage to perform. The microphones stare at you like a man-eating tiger.

Pandit Rajeev Taranath: You are just as good or bad as that evening’s performance or better or sometimes worse for all sorts of reasons. But it is always honesty. I always want honesty so I take the word with a pinch of salt. If you are a performing artiste, yes sir, it is God-like activity. You might get drunk and all that is how people speak about musicians and dancers ayyo avnenri… When they speak like that I feel like doing unmentionable things.  These are the kind of people who don’t pay their income tax and they say after the performance ardha cash thagoli, ardha chequenalli thagoli. How good you are? You see that speaks of our social structure and the morality we have.

SOM: You still took the risk of giving up jobs?

Pandit Rajeev Taranath: You see, performing arts is as good a risk as life. You have learnt to use the bicycle right and there is a risk of toppling, when you drive a car you might hit something. A corpse does not have any risk; it is a firm corpse. The only thing that can happen is to go rotten and smell or get burnt. So when you are really living you have to undertake the risk. In any field, you take risk otherwise you are a doormat, as many people are. Especially people when they retire, they don’t read anything and don’t say anything. If you have to live vitally, which is very important for me, you have to take the risk. I took the risk, not fully, because I took one job for that extra hour to practice.