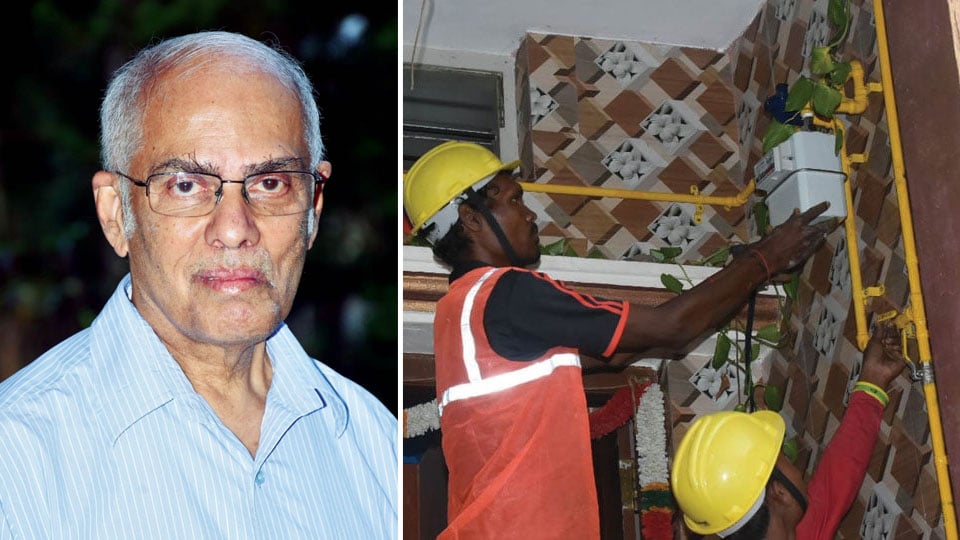 Mysore/Mysuru: The move to put hurdles on the ambitious gas pipeline project by a section of Corporators and elected representatives is unfortunate and will go down in Mysuru’s history as a chapter of infamy. This is nothing but betrayal of the city by our own leaders, opined international oil and energy expert Bhamy V. Shenoy.

In a communiqué to the media, Bhamy, who has vast experience in handling the gas supply chain at international level, has said that the Mysuru City Corporation (MCC) should approve the project to supply piped gas to domestic consumers without any misgivings.

The project of procuring cooking gas through pipeline at home through Piped Natural Gas (PNG) that was announced in September 2021 has already begun and works are on to lay pipelines and metres to houses in Hebbal. The project will be realised by 2023 where over 40,000 homes in Mysuru will get the supply in the first phase.

Following reports of objections raised by a section of Corporators and elected representatives on the Narendra Modi Government project being implemented, Bhamy Shenoy observed that the leaders must realise the benefits of the project before putting hurdles in it.

Bhamy Shenoy is the former Manager of Strategic Planning at ConocoPhillips and he was also the member of the Board of National Oil Company of Georgia. As an expert in managing gas supply chains (as USAID Consultant), he was in charge of managing a gas company Tbilgazi, in Tbilisi, Georgia and had first-hand experience of how Georgians suffered when they lost gas supplies and the problems they faced in using LPG.

“Rather, the leaders must work towards speedy implementation of the project that is immensely beneficial to the people of Mysuru. Instead of betrayal, they must join hands towards development,” he said.

As part of increasing the share of gas in meeting India’s energy requirements, Prime Minister Modi has set the goal of 15 percent for gas by 2030. One of the strategies to reach that goal is to supply gas to residences in most urban centres.

“We in Mysuru are fortunate to be one such urban centre to get gas supply. I would have expected our elected leaders to urge the Centre to expedite the project. It is unfortunate that instead our Corporators are putting hurdles to delay the project by advancing irrational arguments.  It is just a question of time that gas will come to Mysuru and we the people will welcome it,” Bhamy has stated.

“The supply chain of LPG is far more complex than the natural gas supply chain. India is increasingly dependent on imports to meet the requirement of LPG and natural gas. Natural gas burns better and cleaner than LPG to produce less greenhouse gases,” he argued.

Difference between LPG and piped gas

In chemical terms, LPG (Liquefied Petroleum Gas) consists mostly of propane and butane which are heavy molecules compared to piped gas which is methane. Both are in gaseous form at normal conditions.

India depends on imports to meet the requirement of both LPG and natural gas though India produces both. Natural gas is imported in the liquefied form at extremely low temperatures in special ships. LPG is imported from different countries though mostly from the Middle East, China, US, etc. In the case of LNG (natural gas), it is mostly from Qatar, Australia, US, Malaysia, etc.