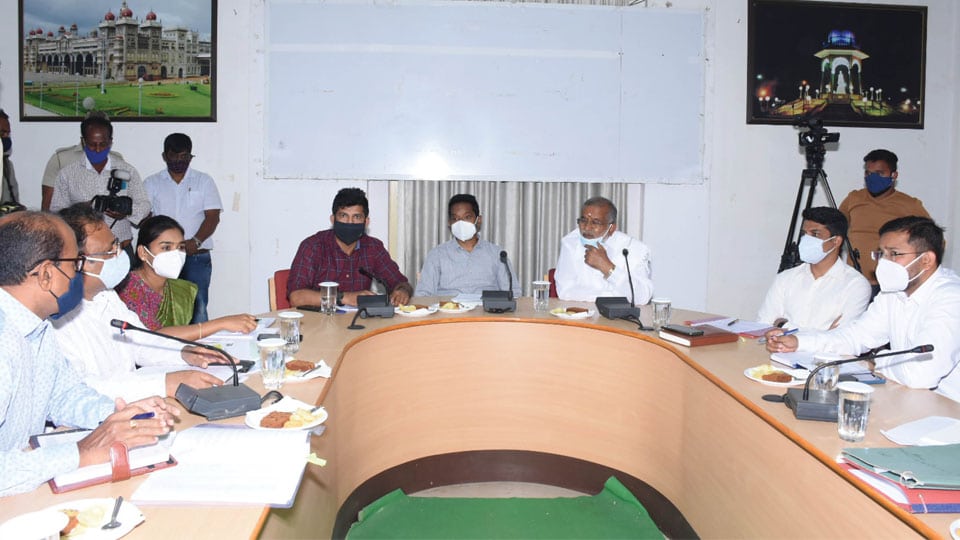 DC, officials assure all impediments will be cleared in a time-bound manner

Mysore/Mysuru: A special meeting was called at the Mysuru Deputy Commissioner’s (DC) Office this morning regarding the implementation of the Mysuru-Kushalnagar four-lane, 93-km National Highway (NH) parallel to the existing NH-275. The meeting took into account certain hurdles that have to be cleared before the tenders are called by the National Highways Authority of India (NHAI).

Mysuru-Kodagu MP Pratap Simha, Chamundeshwari MLA G.T. Devegowda, Deputy Commissioner Dr. Bagadi Gautham and a host of officials attended the meeting. The NH with a width of 45 metres, will start from Bramhapura between Paschimavahini and Naguvanahalli near Srirangapatna and end at Anekadu near Kushalnagar.

It is a fully Centrally-funded Project including land acquisition and other overhead costs. The road will not touch Mysuru and will link the Mysuru-Bengaluru Highway that is being expanded to a 10-lane Expressway.

The project will be implemented in three phases and a major hurdle is land acquisition. Over 500 hectares of land has to be acquired for the project and there are many government and private land that come in the way. There are many acres that have been granted by the government as ‘saguvali’ to marginalised communities and these have to be cleared and ‘durast’ status has to be accorded to such lands for compensation to be distributed.

Tahsildars of Mysuru, Hunsur, Periyapatna, Deputy Directors and Assistant Directors of Land Records were asked to survey the land as per the path of the Highway and ensure the process of ‘podi’ and ‘durast’ are completed.

The DC asked the officials to conduct a survey and clear the land hurdles within a month so that the project tenders can be called in March this year. Once the Deputy Director of Land Records submits a report to the DC, the land conversion comes into force.

READ ALSO  Transfer tussle moves on to the virtual world

Secondly, the officials from Chamundeshwari Electricity Supply Corporation (CESC) have been asked to shift their 15 substations and power grids that are along the NH and funds will be provided by the NHAI for the shifting process.

Over 34.5 acres of forest land comes under the project purview and among the lands many people are cultivating crops. Forest officials were asked by the DC to clear the confusion whether it is forest land or revenue land and handover the same to the NHAI after appropriate clearance.

The NH will pass through 57 canals and 11 lakes from Paschimavahini to Kushalnagar. These lands must also be handed over to the NHAI. There is a controversy in the land acquisition at Periyapatna where certain Tibetans are claiming ownership over the land though the land was granted to them by the Centre as part of the international amnesty policy.

Officials were asked how Tibetans can claim ownership though they do not possess documents of the land. They were directed to take inputs from the Ministry of External Affairs and clear the hurdles after allotting alternative land if cultivated and after examining the feasibility.