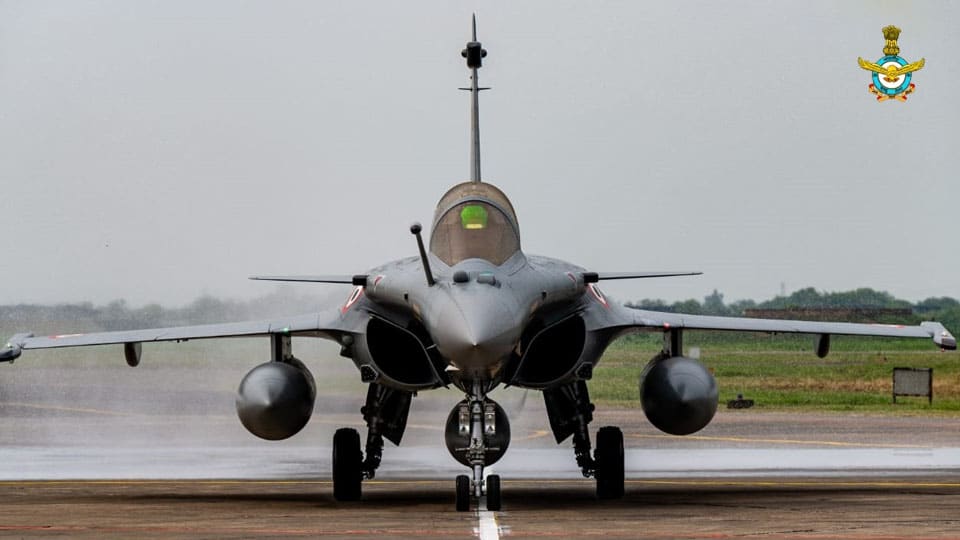 Ambala (Haryana): The first five of a batch of French Rafale fighter jets arrived at Haryana’s Ambala Air Base this afternoon after covering a distance of nearly 7,000 kms to join the Indian Air Force fleet. The Rafale fleet comprises three single-seater and two twin-seater aircraft, an IAF official said.

Water salute was scheduled to be given to the five Rafale fighter aircraft after their landing, say reports.

The fighter jets, piloted by IAF officers, took off from Bordeaux-Merignac facility in Southwest France and refuelled midair from a French tanker at a height of 30,000 feet. The jets also made a stopover in the city of Al Dhafra in the United Arab Emirates where France has an air base and took off for India at 11 am.

Two A330 Phoenix MRTT refuelling planes accompanied the five fighter jets from the French Air Force, one of which is carrying 70 ventilators, 100,000 test kits and a team of 10 health experts to aid India in the fight against Coronavirus.

The Ambala Police have tightened the security and prohibited people from taking photos or videos of the jet planes. People have been asked not to go to their terraces for taking videos or photographs of the aircraft.

The violators will face an immediate arrest and an FIR against them, the Police said. Section 144 has been imposed near the Ambala Air Force Station and surrounding areas. The agreement for the biggest-ever defence deal by India was signed in 2016.

The official deliver of Rafael jets began back in October 2019 when Defence Minister Rajnath Singh visited France. But they were not sent to India as IAF pilots and mechanics were stationed there to train on them.  All the jets are to be delivered by end of 2022.

The first batch, comprising three single seater and two twin seater aircraft, will be inducted into the IAF as part of its No. 17 Squadron, also known as the ‘’Golden Arrows’’, and will be stationed at the Ambala Air Base which has been upgraded for the purpose. It may be recalled here that it was a squadron of Mirage fighter jets from Ambala Air Base that launched air strike in Balakot, Pakistan last year after the Pulwama terror attack.