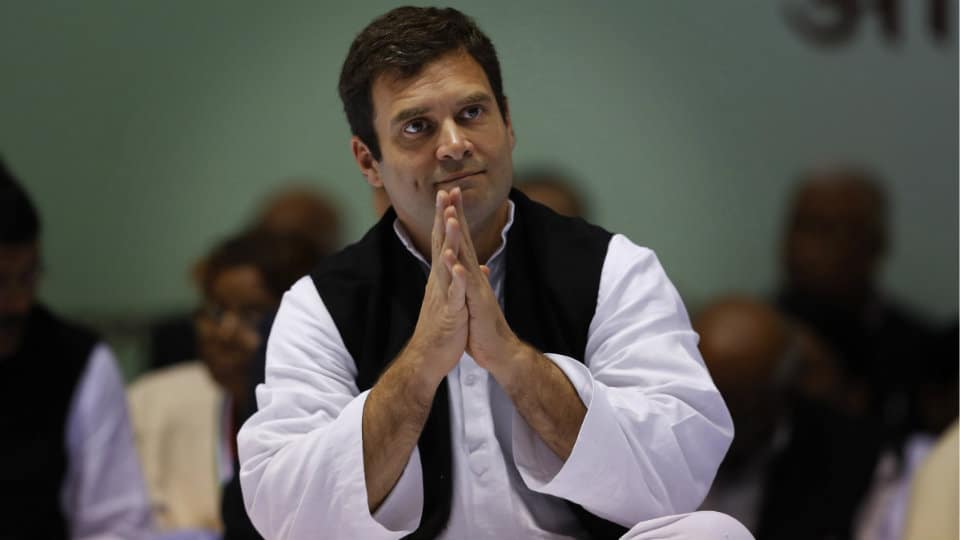 There is a tragic inevitability about the doom of the Congress Party. It’s a Greek tragedy where the hero’s powerful  wish to achieve a goal is defeated by a flaw in his character complicated by fate and the will of the gods. Why the will of the gods should go against the Congress, we do not know. For past sins, perhaps. For present sins, the BJP may face similar wrath of the gods in due course. But that can be no consolation for the Congress now.

Rahul Gandhi, as the Congress’ Greek hero, revealed the flaw in his character when he stormed into the Delhi Press Club in 2013, declared an ordinance issued by Prime Minister Manmohan Singh as “nonsense” and tore up a copy before the cameras. Manmohan Singh took the insult lying down. S.M. Krishna did not. Resenting various humiliations Rahul Gandhi heaped upon him, he gave up the primary membership of the Party he had served with distinction for a lifetime.

The fate of the Congress in Karnataka is now sealed. When the State goes to the polls next year, the Congress will  perforce hand over its only State in the South to the BJP’s Yeddyurappa. On a silver platter. For free. An elated Yeddyurappa was quick on his feet to exploit the opportunity. He called on Krishna and ensured wide  publicity for the meeting. Talk of Krishna joining the BJP filled the air. Krishna inadvertently contributed to the rumours by merely saying that he had not decided about future action. More masala came from Delhi with reports of the  Vice-President’s post being offered to him.

We can see the Greek tragedy entering a three-pronged denouement here, highlighting the moral bankruptcy of the BJP,  the political bankruptcy of the Congress and, interestingly, the dilemma of those of our political veterans who still  have some experience enriched wisdom that only they can contribute.

The Congress has made itself so unwanted in Karnataka that the BJP can afford to plan a clean government in the next  round and surprise the country to its advantage. But it cannot see beyond Yeddyurappa. That a Chief Minister who was  jailed for corruption is again being projected as the party’s leader is a pointer to the BJP’s political morality. Other Cabinet-level jail birds can now return to power, making a mockery of the BJP leadership’s claim that it has freed India from corruption. Is this burlesque or sarcasm? Perhaps it’s humour.

The Congress’ role as the facilitator of the BJP’s return to power in Karnataka underlines its political bankruptcy.  Karnataka was the State that rescued Indira Gandhi when the rest of the country rejected her. From that pinnacle of  influence, it has fallen to a level where the Chief Minister’s main concern seems to be the installation of his life-size posters at every bus stop. This is burlesque. It’s not humour.

The hero’s character flaw brought out a problem that’s generic to all Parties — the role of their veterans. There are two types of veterans, those who brought shame to the Party who should be kept out, and those who earned respect and should therefore be kept in. S.M. Krishna has had his share of mistakes and lapses, but they did not diminish his glamour value in public life. Admired for his patronage of classical music, his social graces and his consideration  for colleagues, he is seen as the most cultured leader from the South, with perhaps only Ramakrishna Hegde matching  him. Parties must find ways to benefit from such personages.

The BJP sidelined L.K. Advani, but extended all respect to him, enabling him to retain his dignity. The CPM resented  V.S. Achuthanandan for his mass appeal, but gave him a position of honour in the Government structure. The Congress seems incapable of such gestures. The will of the gods?

The veterans themselves need to approach the problem with equanimity. Joining a rival Party out of pique is the worst  course to adopt. If, for example, Krishna were to become Vice-President courtesy BJP, he will be seen as politically  second fiddle to Yeddyurappa and indebted to the Prime Minister — a fall from the frying pan into the fire.

Krishna’s education and standing equip him to popularise in India what is routine for retired American Presidents —give lectures, write books, promote education and research, as A.P.J. Abdul Kalam did with great impact. He has in him  more than one book that would add substance to current history.