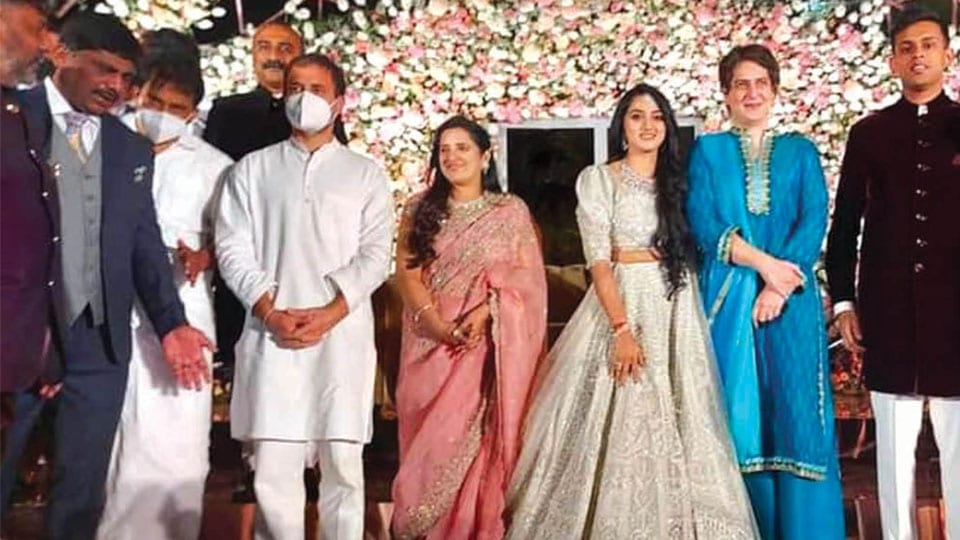 It was an opulent ceremony at Prestige Golfshire Club in Devanahalli where the reception was held. Shivakumar went to the Kempegowda International Airport in Bengaluru to receive Rahul and Priyanka.

Before their arrival, Shivakumar had taken to social media to tell his supporters and well-wishers not to gate-crash the wedding venue. He asked those without invites to bless the couple from the comfort of their homes keeping in mind the social distancing and Corona norms. Shivakumar put out the message because there were hundreds of gate-crashers both at the sangeet and the wedding.

The who’s who of Bengaluru, MLAs, MLCs and former legislators from the Congress, BJP and JD(S) were there to bless the couple. Many senior IAS and IPS officers were also present. It took almost two hours to reach the venue with a huge pile-up of cars on the road. The reception was live-streamed on social media.

The entire plush resort was booked by Shivakumar and all other guests were asked to vacate two days before the reception. Apart from the Police, private security was arranged. The menu included at least 100 varieties of choice dishes from North and South India — vegetarian and non-vegetarian — besides an array of desserts prepared by over 200 cooks and culinary experts from five star hotels.