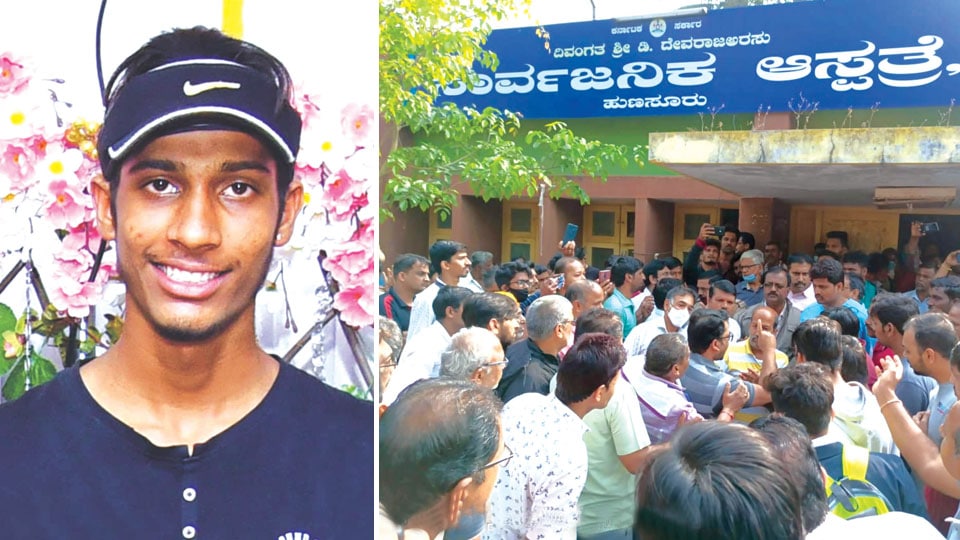 Hunsur: Urging for the suspension of the doctor, who had treated a youth for stomach pain, who later died, the parents of the youth and public, holding the doctor responsible for the death of the youth, staged a protest in front of Hunsur Government Hospital this morning.

Details: The youth, identified as Rahul (19), son of Babulal, a resident of Store Street in Hunsur, began to suffer from severe stomach pain on Tuesday night and was taken to Hunsur Government Hospital for treatment.

Expressing doubts over the death of Rahul, his father Babulal informed the Police and lodged a complaint against the doctor, who had treated Rahul.

Hunsur Circle Inspector Poovaiah, Sub-Inspector Latesh Kumar and staff visited the spot and shifted the body to MMC&RI mortuary in Mysuru for post-mortem.

Following the conduct of post-mortem, the body of Rahul was brought to Hunsur this morning and was taken to his house, where it was kept for some time and the parents and public took the body to Hunsur Government Hospital to stage protest, but were prevented by the Police.

Soon, wordy duel ensued between the crowd and the Police, but the public somehow managed to take the body and staged a protest in front of the hospital.

MLA H.P. Manjunath visited the spot and after hearing the allegations from the parents and public, he assured them of looking into the issue.