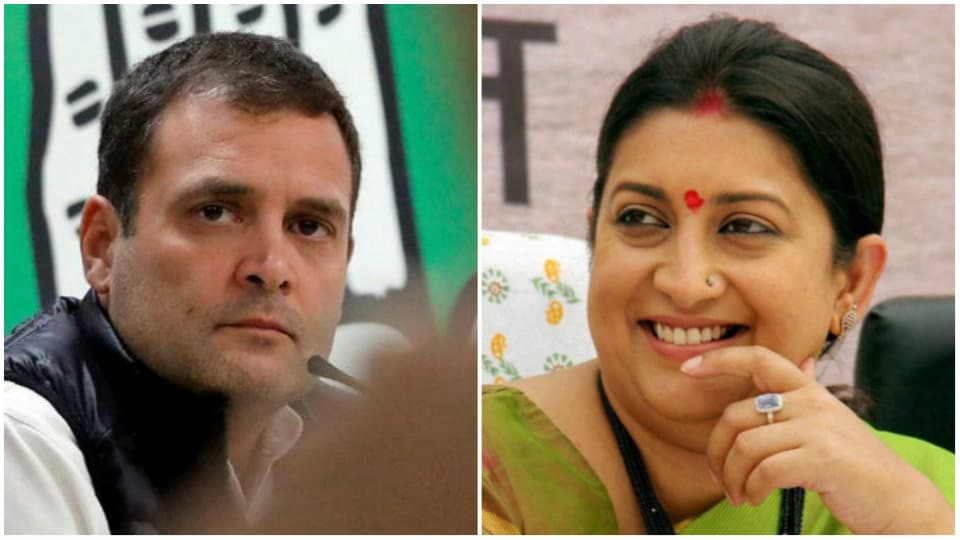 New Delhi: Congress President Rahul Gandhi is fighting a tough battle in Amethi, his Constituency in Uttar Pradesh since 2004. As early leads came in, Rahul Gandhi was behind the BJP’s Smriti Irani but he caught up later. Rahul Gandhi is also contesting from Wayanad in Kerala, where he has been leading since morning.

Amethi, a dusty, largely rural Constituency around 130 km from UP capital Lucknow, features one of the most watched battles in this national election. Smriti campaigned aggressively in Amethi, where she had contested and lost to Rahul Gandhi in 2014 but had managed to reduce his winning margin to one lakh. She kept visiting the Constituency regularly and launched Central schemes there.

Rahul Gandhi, his party’s chief campaigner across India, was accused by the BJP of neglecting his Constituency. At the height of the election campaign, the Congress President visited Amethi only once, when he held a road show before filing his nomination papers.

His sister Priyanka Gandhi Vadra campaigned in Amethi and her mother Sonia Gandhi’s Raebareli and visited the Constituencies several times. Rahul Gandhi’s struggle was telling in his traditional seat, a Congress stronghold that has remained with the Gandhi family for decades. The Congress has not lost the seat in the last three decades, except in 1998.

BJP takes big lead in Karnataka as Coalition stares at collapseBengaluru, May 23- The BJP has taken a huge lead in the national election in Karnataka over the Congress and Janata Dal-Secular alliance, which took power in the State exactly a year ago. The BJP was ahead in 23 of the State’s 28 Lok Sabha seats. The Congress and JD(S) were ahead in only five in early leads.

Among the prominent candidates, Tejasvi Surya of the BJP, is leading from Bangalore South against Congress’ B.K Hariprasad. The JD(S)-Congress coalition appeared to be heading for a disastrous showing in the State after months of internal bickering and strain.

Two days ago, Congress leader Roshan Baig ripped into his party leadership in Karnataka, calling them “buffoons” and a “flop show”.

The two parties have struggled to keep the coalition afloat. Some in the Congress accuse the JD(S) of prepping to switch sides to the BJP. The outcome might spell heartbreak for the H.D. Deve Gowda family with the former PM trailing in Tumakuru, his grandson Nikhil Kumaraswamy seeing a tough fight in Mandya. The silver lining is his other grandson, Prajwal Revanna, who is leading in Hassan.

Cracks had already started appearing in the Coalition Government after exit polls predicted a successful outing for the Modi and Shah led BJP in State.

JD(S) Spokesperson Tanvir Ahmed has threatened “trouble” for the coalition if numbers don’t favour the alliance today while Congress leader Brijesh Kalappa replied in the same coin, saying poll results 2019 are bound to have an impact on the coalition.

BJP is leading in 23 seats, including in Deve Gowda’s Constituency of Tumakuru, Tejasvi’s Bangalore North, Bangalore South, Uttara Kannada where Anant Kumar Hegde is contesting as the Party’s candidate and Shivamogga where Madhu Bangarappa, son of S. Bangarappa who served as CM for about two years in the 90s, is contesting.

Tejasvi Surya, who is making his political debut as a BJP candidate, is currently leading with a margin of over 1 lakh votes.

The other candidate who is leading with a margin of over a lakh is B.Y. Raghavendra, son of former CM Yeddyurappa, who is contesting from Shivamogga.