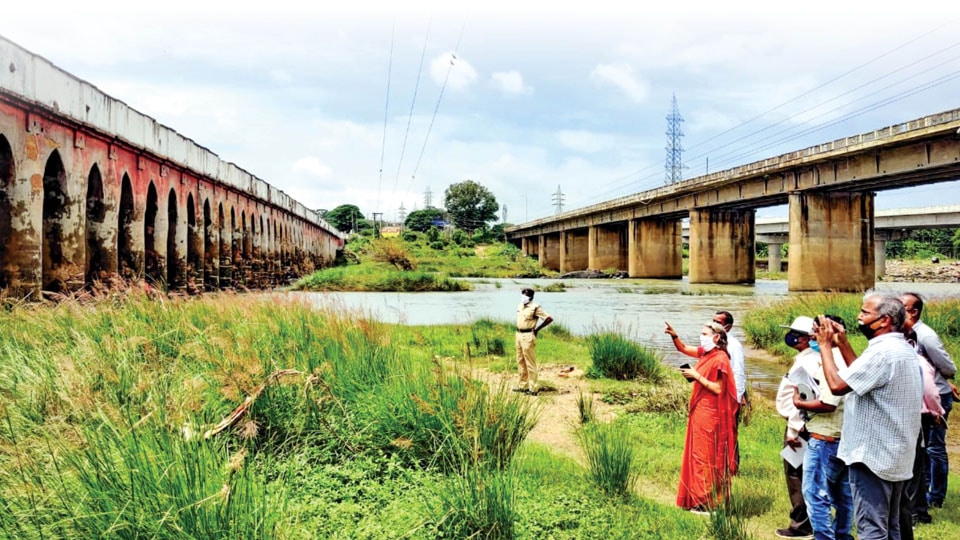 Railways to give facelift to historic Kabini Bridge in Nanjangud

Mysore/Mysuru: Once again exhibiting love for heritage structures, the Mysuru Division of South Western Railway (SWR) has come forward to give a facelift to the historic bridge across River Kabini in the Temple Town of Nanjangud. If everything goes well, the renovated bridge will be thrown open for public view during this year’s Dasara celebrations. Thanks to Aparna Garg, Divisional Railway Manager, Mysuru Division, this heritage structure is ready for spruce up.

Speaking to Star of Mysore Aparna Garg said she developed interest towards this historic bridge after going through Railway records and  personally visited the spot to have a glimpse of the bridge that was in use till a new bridge was built.

She said she was awestruck with the engineering marvel of this bridge that was built nearly 300 years ago and the structure is sturdy despite being exposed to harsh weather till date. “I personally spoke to our Railway Engineers who agreed to give a facelift and to maintain the heritage structure,” the DRM said.

She said a Rs. 50 lakh proposal has been sent to the Divisional Head Quarters in Hubballi seeking permission to revive this historic bridge and was awaiting clearance.

The total length of Kabini Bridge is 225 meters with 56 piers. Once permission  is given, the Railways will first clear the bushes all around abutments, plastering of damaged piers, repair of damaged parapet wall and filling up of potholed road leading to the old bridge, colour washing to bridge, appropriate lighting which will add glory to the structure and erecting a board containing detailed information about the historic bridge. “We are also exploring Corporate Social Responsibility (CSR) funding for the work,” she noted.

History of the bridge

The Kabini Bridge, built across Kapila River, has been declared as the oldest bridge with both Railway Line and road on the same bridge by the Government of India. It is located at the entrance of Nanjangud Town. The bridge was built by Dalvoy Devaraj in 1735 with brick, sand and stone in Gothic style. Though it was built before the Railway tracks were laid, the bridge was and is more commonly labelled as a Railway bridge.

The Kabini Bridge has a series of Gothic arches of 10 ft. span with 8 ft. wide intervening piers. The earth cushion over the arch crest is over 5 ft. The foundations are laid on rocky strata and built in lime concrete.

The bridge is of stone masonry with lime concrete filling and mortar. It has 51 spans of 10 feet and before 1902, it existed as a road bridge ferrying bullock, camel and horse carriage traffic across the Kabini.

A narrow gauge Railway line was laid from Mysore to Nanjangud in 1902 and the Railways used the arched bridge to connect it to the Nanjangud Railway Station. Trains ran on this bridge from 1902 to 2007. The last train to run on this heritage rail infrastructure was on Jan. 17, 2007 when the Railways decided to put a stop to meter gauge trains and operate broad gauge trains. Since broad gauge needs a different alignment from narrow and meter gauges, a new bridge was built across the Kabini River.