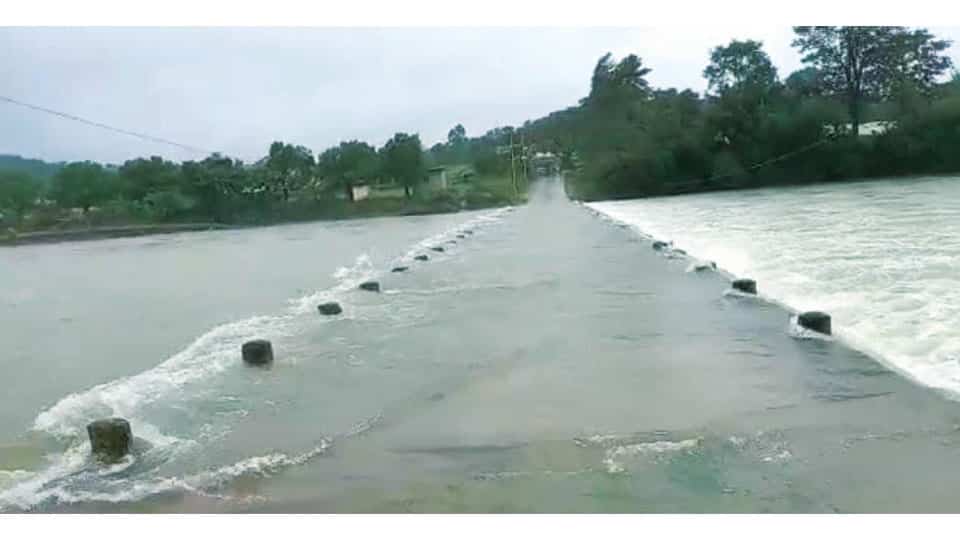 Madikeri: Relentless rain in the last one week or so has caused extensive damage to roads connecting important commercial towns in Kodagu and normal life has been disrupted for the third consecutive day.

The India Meteorological Department (IMD) has sounded a red alert in the district and holidays have been declared for anganwadis and schools today. As many roads are blocked, transportation has been hit and buses are returning to their starting point before reaching their destination.

People are forced to walk amidst rain, crossing tree branches that have fallen on roads. Following gusty winds, trees have been uprooted and electricity poles have fallen, disrupting power supply. Repair and restoration work too has been hampered due to continuous downpour.

Due to the inundation of Bhagamandala-Madikeri Road at a couple of places, Bhagamandala is facing the threat of losing connectivity with Madikeri. The Madikeri-Napoklu Road has been blocked and many houses have collapsed in Karnangeri, M. Badaga, Chembu, Urubailu and Bhagamandala villages.

The Forest Department and Chamundeshwari Electricity Supply Corporation (CESC) staff are on their toes throughout the day to clear uprooted trees or electricity poles. MLA K.G. Bopaiah, who had come to supervise the road clearance work on the Bhagamandala-Karike road was stuck for more than two hours as his vehicle could not move due to landslides. He could resume his travel only after the debris was cleared.

River Cauvery has breached the danger level in Kushalnagar and more than 20,000 cusecs of water is being released at regular intervals from Harangi Reservoir to Harangi River. As a result, many areas in Kushalnagar like the Sai Layout have been inundated.

People were seen moving their household articles and valuables before the water level rises as there will be more water releases. They have taken shelter in the houses of relatives and many even have opted to stay in dormitories and religious institutions.

Coffee plants are rotting and coffee seeds have dropped from plants in many places due to sustained wet weather and continuous rains. Heavy seed droppings and sapling decay have been reported at estates in Birunani, Balele, Kutta and in Ponnampet. A part of a coffee estate owned by Chottangada Bose in Birunani has washed away due to a groundwater explosion. Only slush and uprooted plants remain here now.

Rainfall data in Kodagu and its 3 Taluks