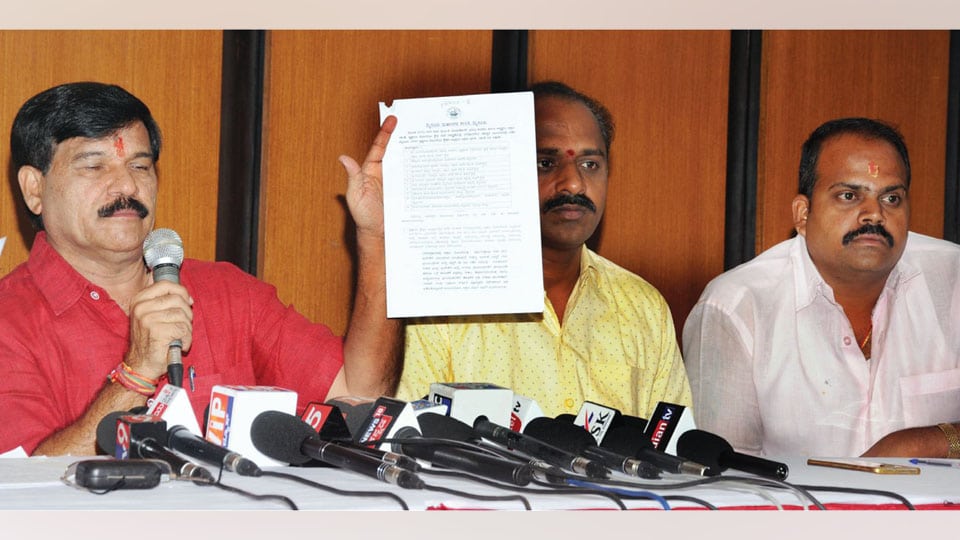 Mysuru: Alleging a Rs. 7 crore scam in Pradhan Mantri Awas Yojana- Housing for all and Vajpayee Urban Housing schemes in K.R. Constituency, former Minister and BJP leader S.A. Ramdas has said that he would lodge a complaint in this regard with the Anti Corruption Bureau, seeking a thorough probe into the scam.

Addressing a press meet at a private hotel here this morning, Ramdas said that the State Government in its order dated 13-3-2018 had sanctioned 5,296 houses under the Housing of All (HSA) scheme at different locations in K.R. Constituency. But the K.R. Constituency Ashraya Samiti headed by K.R. Congress MLA M.K. Somashekar held a meeting on Feb.24, 2018 even before the Government sanction and illegally selected beneficiaries, with one of the members collecting money ranging from Rs. 10,000 to 50,000 from each of the nearly 1,400 applicants, which is a  huge scam.

Wondering where the houses will be built when there is no land acquired or available, Ramdas alleged that the K.R. MLA and the Ashraya Samiti members were only fooling the scheme beneficiaries.

The former Minister said that he would lodge a complaint with the ACB to probe the scam in detail. Ramdas presented a 7-minute video clipping in support of his allegation said to be recorded in a sting operation, in which one of the K.R. Constituency Ashraya Samiti members Nasir Pasha is seen reportedly collecting money from the applicants based on the amount that is allegedly written on the housing scheme application form. City BJP President Dr.B.H. Manjunath, Corporator B.V. Manjunath, leaders M.Rajendra, Jogi Manju were present.