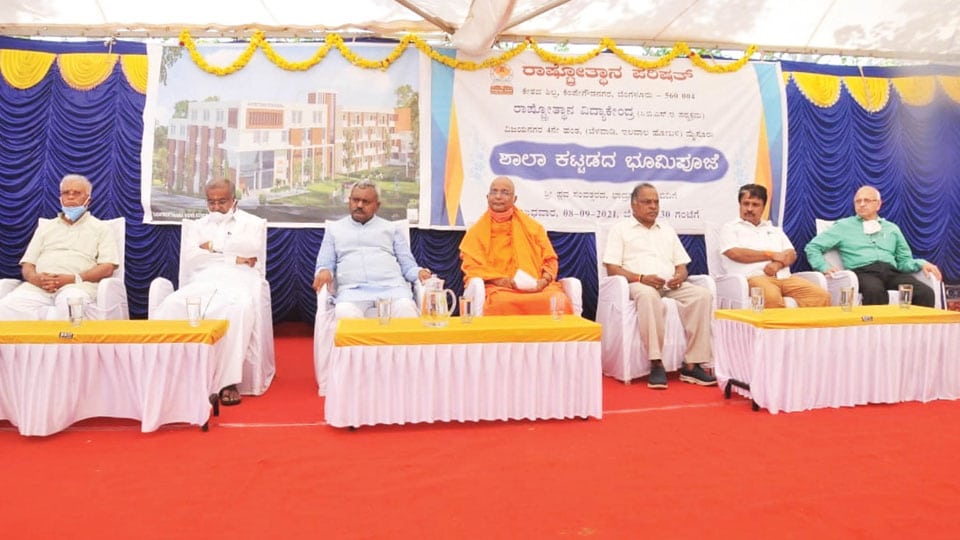 Mysore/Mysuru: Maintaining that Rashtrothana Parishat is promoting Indian culture through its Vidya Kendras at a time when the current generation is swayed by western culture, District Minister S.T. Somashekar said that the Parishat is making an enormous contribution for imparting education to all sections of the society.

He was speaking at the ground-breaking ceremony (bhoomi puja) for the construction of Rashtrothana Vidya Kendra at Vijayanagar 4th Stage in city on Wednesday.

Bemoaning that today’s education is largely limited to listing of marks and issuance of certificates, Somashekar expressed concern that western culture is fast replacing the Indian culture in our academic system.

Contending that Rashtrothana Parishat Vidya Kendras are coming up at a time when Indian system of education is facing a severe crisis, he said that it is laudable that these Vidya Kendras are giving prominence to Kannada, when the language is under threat from other languages.

Mysuru Ramakrishna Ashram’s Swami Mukthidanandaji, in his address as the guest of honour, said that Swami Vivekananda always believed that education in real terms must be based on  three factors — emotions, morality and Spiritualism.

Noting that Vivekananda had said that missing of any one of the three in the link would not be a complete education, he stressed on the need for imparting education that teaches culture, ethics and the like.

Arguing that the current academics is only for building our career, he said that such an education system has failed in teaching life lessons. As such, it is vital to impart education based on the fundamental aspects of  ethics, emotions and spiritualism, the Swamiji maintained.

Rashtrothana Parishat S.T. Somashekar
University of Mysore ranked 19 by NIRF
Assembly Session from Sept. 13; None should be absent: Speaker