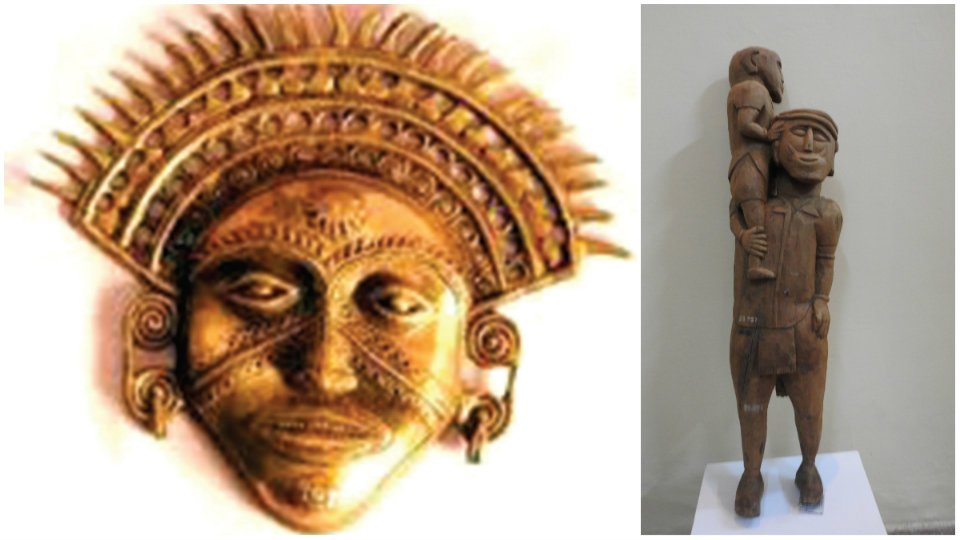 Rathwa Aadmi ne Chhokro is exhibit of the month at IGRMS

As part of its ‘Exhibit of the Month’, the Indira Gandhi Rashtriya Manav Sangrahalaya (IGRMS) has organised a special exhibition ‘Aadmi ne Chhokro’ — man and child, an ethnographic wooden object from Rathwa tribe of Gujarat.

The exhibition was inaugurated yesterday by J. Vijay Mohan, Officer-In-Charge IGRMS, Southern Regional Centre and will be on till the end of this month.

Rathwa is a forest-based community from Gujarat. The name of the tribe has been derived from the term “Rathbistar” and they are called Rathwas. They are also known as Rathawa Koli. They are mainly distributed in the Chhota Udaipur, Jabugam and Nasvadi Taluks of Vadodara district and also in Halol, Kalol and Baria Taluks of Panchmahal district.

Rathvi is the medium of communication within the family members while Gujarati and Hindi are used with others. The traditional dress of the adult male members is langoti (loin cloth), kachuta and the phenta (headgear). Female members dress up with the ghagaro (lower garment) and cholia (upper garment).

Women wear silver kala (armlet) but kala of men is made of iron. They also wear ‘fasi’ on the wrist which is made of silver. They consume both vegetarian and non-vegetarian food. According to 2001 census, the population of Rathwa was 5,35,284 out which 2,73,296 were males and 2,61,988 were females.

The Rathwa tribes are experts in wood carving and Pithora painting. The basic themes of their art and craft involves a series of life styles like singing, dancing, hunting, domestication of animals and other daily life events. They have a unique concept of storytelling with  visual excellence.

READ ALSO  Chakri Jhul from Chhattisgarh on display at IGRMS

The relation between father and son, mother and daughter, sister and brother, wife and husband are meticulously carved in their wood craft. Their belief in tribal God and Goddess is also well focused through their wood craft. The raw material (wood) is acquired from the local forest to create the craft. Wood carving is hereditary art among the  Rathwa community.