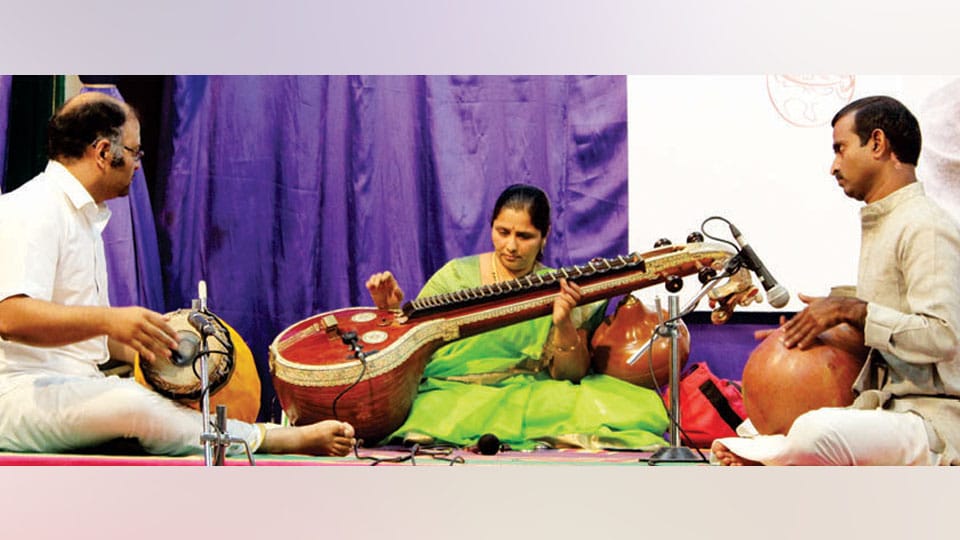 The names Veene and Seshanna (1852-1926) are inseparable. His contribution to the field of Veena is remarkable. He was mainly responsible for spreading Mysuru’s galore of music in and out of India. It is believed that it was he, who is responsible for the famed ‘Mysuru Baani’ or style of playing. He was a pious devotee of Saraswathi, hailed from a reputed family of Vainikas who adorned the court of Mysuru. He was also adept in playing violin, Piano, Jaltarang and Swarabath.

Seshanna was also a great composer. His Thillanas are popular among musicians and dancers. He has composed in many rare ragas like Jhalavarali, Gamanashrama and Rishabhapriya and taalas like Sankeerna Mattya, Mishra Triputa and Khanda Dhruva. His disciples include the famous Veena Venkatagiriyappa, Shermadevi Subramanya Shastri, Laxminaranappa, Tirumalai Rajamma, Artist Venkatappa and his grandson Swaramurthy V.N. Rao. Dr. Doreswami Iyengar, M.J. Srinivasaiyengar and R.N. Doreswamy and M.K. Saraswathi, all belong to his Shishya Parampare. Hence, one can say that his legacy is continuing.

‘Ganabharathi,’ which has a building in Seshanna’s name, celebrated his day on the 12th of November in a unique way  by arranging Veena recitals from morning to night. Many eminent Vainikas paid rich tributes to the Great Vainika by including his compositions in their playing.

Vidu. Bharathi opened the series accompanied by Saishivu (Mridanga) and S. Manjunath (Ghata) with his Varna in the raga Jhalavarali. Apart from ‘Mahaganapathim’, she played ‘Ubhaya Kaveri Ranga’ (Gamanashrama) and a tillana (Khamach) of Seshanna.

Balakrishna, son of Dr. DoreswamiIyengar took the stage along with G.S. Ramanujam (Mridanga) and S. Manjunath (Ghata). He is known for his pure Mysuru style of playing with rich raga bhava and no frills or fancy. He had selected only Seshanna’s compositions. The opening Varna in Kedara ‘Sarasijakshi’ (Khanda Atta) paved way to typical Aanandabhairavi that had Mysuru flavour. ‘Rama ninnu’ included crisp kalpanaswaras too. A fine delineation of Vachaspathi was followed by ‘Emanidelupudura’ and the famous Darbarikanada Tillana.

Prashanth Iyengar from Bengaluru transformed the whole atmosphere by displaying his tremendous control on the instrument. His young son Shree Rama too joined him with Adamya and M.R. Manjunath. He displayed all his skills in the elaborate raga Hemavathi. His perfect pulling could bring out three or four notes! ‘Ninnujuchi’ was power packed. ‘Jagadoddharana’ was an entirely different and sober    presentation stressing only on the raga bhava.

The last three vainikas did total justice to the divine instrument. Mudikondan Ramesh, with H.L. Shivashankaraswamy and Sharath Kaushik filled the auditorium with his Veenanaada. Every note he produced carried  not only the raga bhava, but also the divine music. All the ragas he played like, Hamsadhwani, Mohana and Khamach were sufficient evidence to establish this. A perfect, sincere approach that optimised every nuances  the instrument could produce. ‘Raghunayaka’, ‘Evarura’, ‘Kaapaadabekuthaye’ and ‘Siriye’ were brimming  with purity. 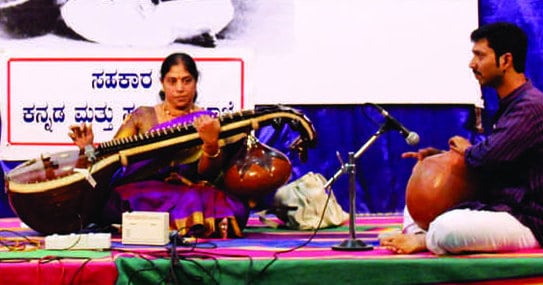 Rajalakshmi presenting veena recital along with Sharath Kaushik on ghata

The concluding concert was by Vidu. Yogavandana. Her playing was  to reveal purity and only the purity of music. No gimmicks or stunts to attract the audience. She was accompanied by Tumkur Ravishankar and Vikram Bharadhwaj. She started off with a swarajathi in Kharaharapriya, followed by ‘Durmargachara’(Ranjani-Tyagaraja)and a fine composition of Mysuru Sadashiva Rao ‘Shree Kamakoti’ in Saveri. It was indeed a soothing alapa and the kalpanaswaras showed her rich imagination. Seshanna’s Hindustani Kapi Tillana brought the curtain down to a wonderful day with Veena. A worthy salutations to a Great Vainika indeed.