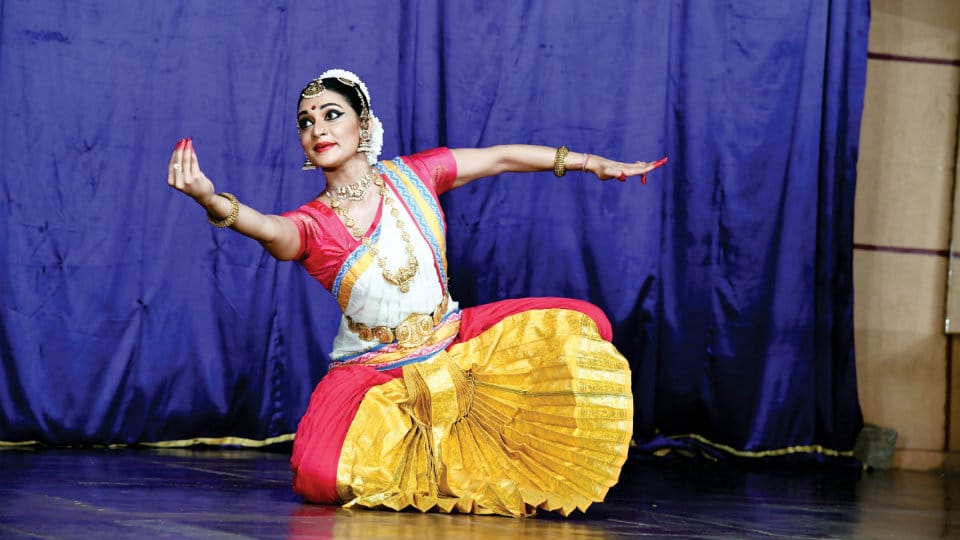 The untold stories of flowers unravelled its many unknown fragrance to the rasikas of Mysuru on the 7th of June at the Veene Seshanna Bhavana of Ganabharathi. This unique attempt is a brainchild of Vidu. Divya Ravi of Bengaluru. The mythological, philosophical and spiritual significances of these flowers are often ignored. She opted to tell these stories of flowers through a finely crafted Bharatanatyam solo performance.

Groomed by the famed dancing couple Sandhya-Kiran Subramanyam and Soundarya Srivathsa, Divya is committed to dance. Her neat Nritta, fine abhinaya and her quest to explore the lesser known themes through choreographic ventures establish this commitment.

The theme was neatly presented within the parameters of ‘Marga’ tradition in a two hour concert. The six items revealed different faces of flowers.

‘Ashoka,’ the fragrant red coloured pushpa revealed a rare story, other than its well-known reference of ‘Ashoka Vana’ in Ramayana. The egoistic ‘Tashoka,’ cursed by the sage becomes ‘Ashoka’ — the tree without ‘shoka’ and renounces his ego.

This sanchari was followed by Kalidasa’s reference in ‘Malavikagnimitra’ that Ashoka tree bears flowers by the soft kicking of damsels. The neat sancharis were interesting with a relevant song in the raga Anandabhairavi in the background.

The next flower was Lotus, ‘Parama Paavana Padma.’ It is said in the Padma Purana, that Brahma the creator, created the universe with a golden lotus.

Divya successfully conveyed this theory of evolution with her good choreography. The seven chakras in human body are also represented by lotus with different number of petals. Lotus has been the favourite of our Gods and Goddesses with their lotus like eyes, face, hands, feet etc.

A Javali in Ragamalika beautifully portrayed Sathyabhama’s anger, jealousy and disappointment for, Lord Krishna has given ‘Parijatha’ flower to Rukmini, and not her, who is his beloved queen. Divya Ravi excelled in her abhinaya as ‘Kalahantharitha nayika’ in this item. ‘Kethaki’, which is not used to worship Lord Shiva has an interesting story behind.

She is cursed by Shiva when intoxicated by her own fragrance and pride, lies to him. Divya explored this story in the form of a Pada, set to Raga Saramathi.

Divya’s final message was, flowers which carry on their species have been inspiring, evolving and helping mankind in his effort to self realisation. A lively thillana in the raga Lathangi portrayed their presence in our daily life like worshiping, showing respect or happiness or in surrendering. Divya Ravi’s effort certainly deserves appreciation.