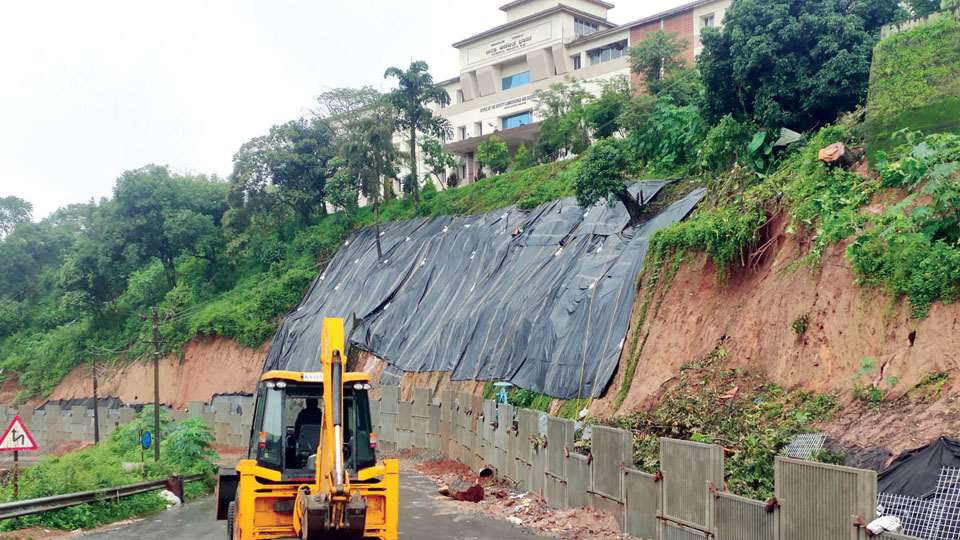 Madikeri/Kushalnagar: Under threat of collapse due to incessant rains and possible landslides, the Kodagu DC Office is being protected with a 40-ft concrete retaining wall. But the works have started only now though the project was formally sanctioned long back and works on making pre-cast concrete slabs began in February this year.

Now the works have begun amidst heavy rains and a small portion of the wall has been built. The steep gradient on which the DC Office stands has been covered tightly with plastic sheets so that mud does not fall while undertaking the works. Rs. 5 crore is being spent on the project.

The District  Administrative Office (DC Office) is located on a steep gradient along the Madikeri-Mangaluru Road and was built at a cost of Rs. 14.43 crore. It was inaugurated in November 2014 and last year, all the offices located in the DC Office Complex were shifted and they operated from the Office of City Municipal Council.

Officials requesting anonymity told Star of Mysore that the works were delayed because of COVID second wave and the tendering too got delayed though the project was sanctioned long back. The Geologists from Geological Survey of India (GSI) who conducted a study of the steep gradient on top of which the DC Office is located, had recommended the District Administration to construct a retaining wall to prevent  any landslides.

“Works have started now and we will continue the wall construction work till July first week and will stop the work if it rains incessantly. We have a project completion time till December or January 2022,” officials said.

As the threat perception is high due to a couple of landslides that have occurred on the Madikeri-Mangaluru Road and following instances of road caving in and cracking open, a mock drill was conducted at the DC office last Friday where employees were evacuated.

The National Disaster Response Force (NDRF) and Fire and Emergency Services Department conducted the mock drill where drills including evacuating the injured or the trapped were demonstrated and practiced. Ladders were placed on the outer walls of the building and ropes were used to demonstrate the preparedness in case of emergencies.