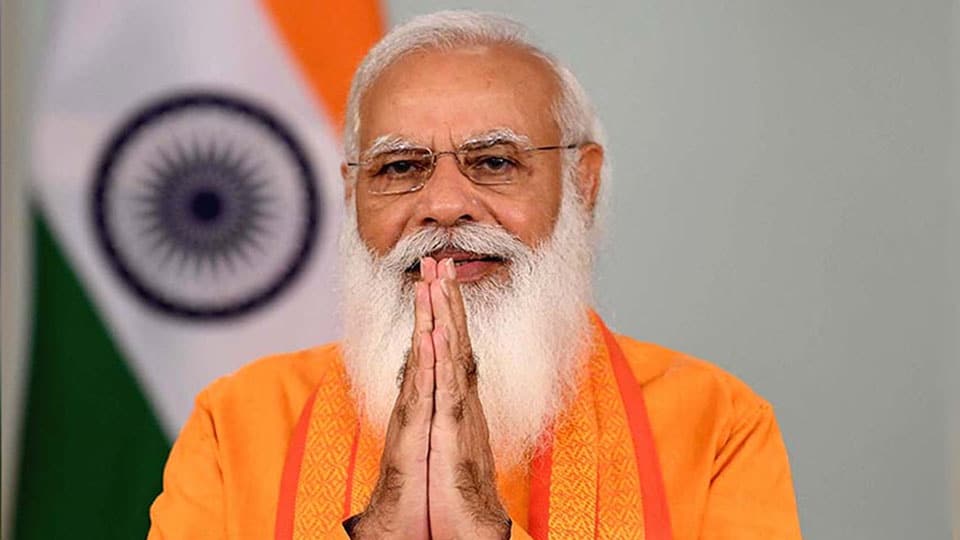 No country was ready for COVID, Yoga helped: PM Modi

‘WHO mYoga’ app launched; to help fulfil motto of ‘One World, One Health’

New Delhi: Yoga became a source of inner strength among people amid the COVID-19 pandemic and inculcated faith in them that they could fight the virus, Prime Minister Narendra Modi said this morning.

“Yoga shows us the road from stress to strength and from negativity to creativity,” PM said as he addressed the lead event of the seventh International Day of Yoga (IDY). The theme this year is “Yoga for wellness.”

Due to the Coronavirus pandemic, the lead event of Yoga Day this year was a televised programme and Modi, who was dressed in an orange kurta, began his speech at 6.45 am.

“When COVID emerged, no country was prepared. At this time Yoga became a source of inner strength. Yoga helps in self-discipline and it inculcated faith in people that they could fight this virus. Frontline warriors told me that they made yoga a tool in fighting the virus,” PM Modi said.

PM Modi also said that India, in collaboration with the World Health Organisation (WHO), has launched the ‘WHO mYoga’ application, which will have many videos of Yoga training based on Common Yoga Protocol available in different languages of the world. This will help us in making the “One World, One Health” motto successful, he said. “For most of the countries of the world, Yoga Day is not their age-old cultural festival. In this difficult time, people in so much trouble could forget it, ignore it. But on the contrary, people’s enthusiasm for Yoga has increased, love for Yoga has increased,” PM said.

Highlighting the importance of Yoga on one’s overall well-being, he said, “Yoga shows us the road from stress to strength and from negativity to creativity. Yoga tells us that so many problems might be out there, but we’ve infinite solutions within ourselves. We’re the biggest source of energy in the universe,” PM said in the televised address to the nation.