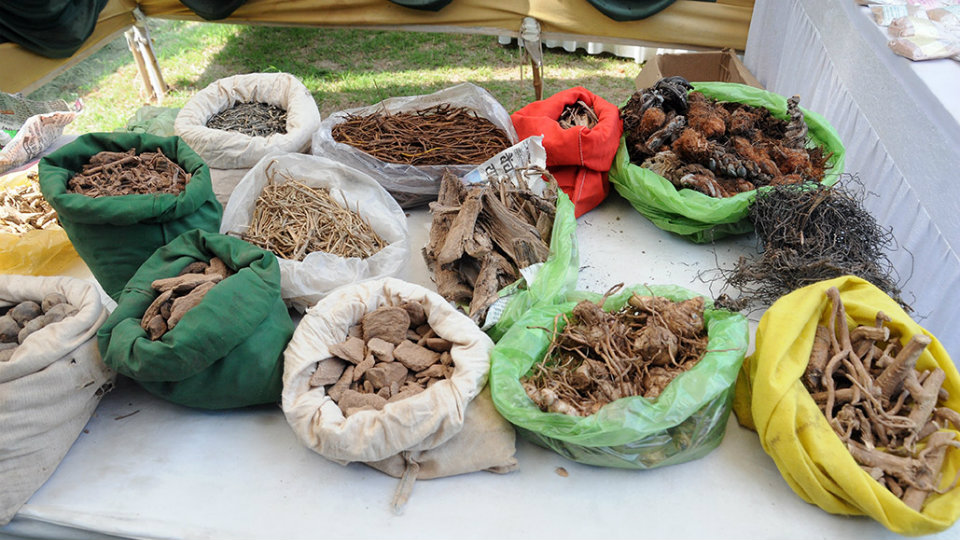 The National Workshop on Tribal Healers and Exhibition of Tribal Medicines, being held at Indira Gandhi Rashtriya Manav Sangrahalaya (IGRMS) premises on Irwin Road, Mysuru, has several tribal healers from various States who aim to revive the traditional healing practices. The workshop focuses to document their methods and practices that will be studied for future correspondence. At the expo, the healers have set up small kiosks, where they have several roots, shrubs, leaves, etc., that act as a source of cure to several ailments. Star of Mysore interacted with a few of the healers, who gave an insight into the naturally curing tribal healing methods.

“Tribal medicinal practices have no side effects at all”

A group of tribal healers hailing from Nilgiri, Kotagiri, Ooty, Tamil Nadu, claim that it is essential for a person to know about the tribal and natural medicinal practices as it will help him/her in leading a healthy as well as a long life. Four old ladies clad in white sarees belonging to Kurumbar and Irula tribe communities have set up a stall at the ongoing Exhibition and have devised medicines for several ailments. Sushila, Kannama, Chellama and Janaki have been practicing tribal medicinal practices since their childhood.  They have traditional and natural cure for problems like piles, jaundice, blood pressure, joint pains, asthma, wheezing, fractures, cold and coughs, etc. They have several oils and powders made out of roots and leaves that help in body heat reduction, hair growth, face glow etc. They inculcated these traditional practices in their lives from their elders and that continued on to others. These communities have been practicing this since 3 to 4 generations. The healers from Nilgiris, Ooty: (From left) Kannama, Chelamma, Janaki, Mani and Sushila are seen with their medicinal oils, plants and roots at the Tribal Medicine expo in city.

Janaki, who is in her sixties, told SOM, “We come from Nilgiris where there is a rich biodiversity of medicinal plants for several ailments, using which we can help the patients in curing their ailments. But we face a tough time from the forest officials as most of the plants are grown in the wild; the officials do not give us permission to ferry them. We manage to get some roots and shrubs in little quantities and with that we prepare medicines. Only if we get enough support from the government we can do wonders with these herbs which in turn will benefit the public.  These practices of healing have no side effects at all. I have been accustomed to this since my childhood and this practice is completely safe and effective.”

Mani,  who is also a part of this group added that since 15 years they have been healing people regularly at their village, but since the last ten years they  also move out even from State to State to heal people. On being asked about the names of the trees or the herbs, he denied to reveal them as he opined that it was a secret and it once so happened that the commercial industries mixed some chemicals along with the herbs which led to misuse of their knowledge.

“Identifying plants and their values is the key”

A 52-year-old healer Vaidh Gangadhar, hailing from Amarkantak, Madhya Pradesh, is well-versed with the knowledge of plants and its properties. Being a part of the Bharatiya Jai Buti Vigyaan Kendra, MP, he is engrossed in preparing medicines for different ailments. At his stall, he has cure for jaundice, eye strains, joint pains, migraine, low haemoglobin concentration, cancer, asthma, tuberculosis, weakness and blood pressure. He has been identifying plants since the age of seven. He said, “I used to go with one of the Vaidh Gurus (Healing teacher) to the forest in my childhood and since then I have surrounded myself with the study of plants. I have several plants and herbs like Chitrak, Kali haldi, Jata Shankhari, Brahmi Buti, Safed Musli etc. I have gained this knowledge of plants with just experience alone which I have mastered over a period of about 45 years.” 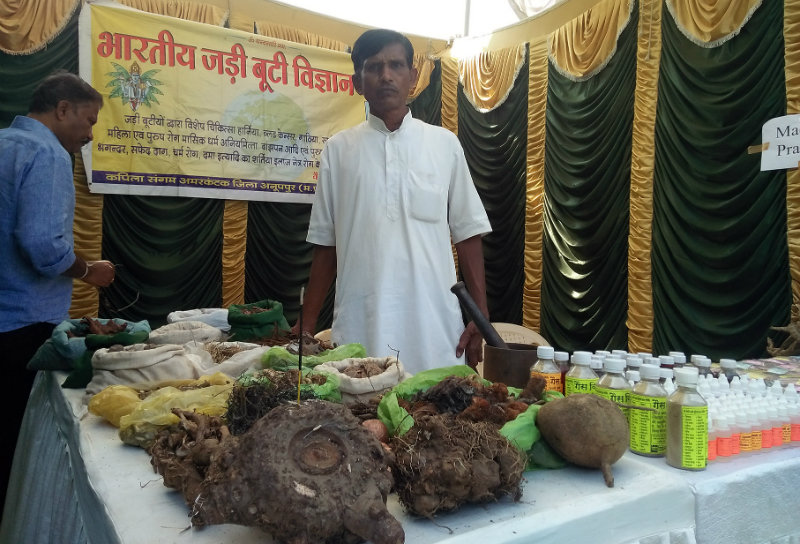 Vaidh Gangadhar of Bharatiya Jadi Buti Vigyaan Kendra from Madhya Pradesh with his setup of roots and herbs at the expo.

On being asked if he faces difficulty from the forest officials, he said, “The forest officials are doing their duty to conserve the plantation and wildlife. The forest conservators educate us and also guide us — for instance, if a species of plant is becoming extinct or endangered we do not pluck them or uproot them. It is the people who do commercial business who are a major concern to the safety of forests. The greed to want more and more is destroying the natural resources. We just take a couple of roots and leaves and serve the patients. Some tribes also have their own nursery at their homes.”

Gangadhar has also guided and helped several students in their Ph.D research on plants and ayurveda. He has been awarded a certificate for helping about 100 research students from University of Allahabad, UP, in identifying plants in the forests. He loves the bond that he shares with plants and will continue to serve the public.

“Tulsi is the Best Medicine”

Ravi Mamlaji, an Adivasi belonging to Rajgondh Samaj, is a part of the Jaiseva Jadi Buti expo at IGRMS. He and his team which consists of his son Vimal, Ratan Maharaj, a Raj Vaidhya and Bhamsilal, hail from Bidar, Karnataka. Their only objective is to revive ayurveda and the old medicinal practices which are slowly fading away due to modernisation and commercialisation. They have medicines like Brahamadandi, Satvari, Rakthkand,Gond Satva, Maha Suganda etc., catering to different diseases like diabetes, bronchitis, allergies, hair fall, acidity, chronic disorders etc. They were of the opinion that Tulsi must be grown at every individual’s house and must be a part of the daily diet as it has super healing powers. 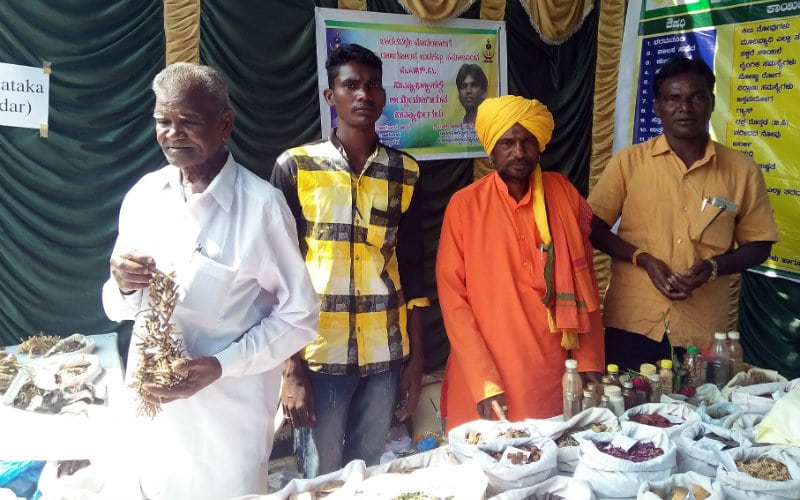 From left: Bhamsilal, Vimal, Ratan Maharaj and Ravi Mamlaji of Bidar belong to an adivasi tribe that is practicing ayurveda.

Ravi Mamlaji was all praise of the Karnataka Government for helping them in reviving the tribal healing practice. He said, “The Government is giving us recognition and invites us to such workshops where all expenses are taken care of.  They have given us lands at Bidar where we have setup our Ashram and provided us home to live in. My son Sudarshan is a M.A graduate; he left his job and is now doing his Ph.D in Ayurveda as the Government is funding his studies in the Hampi University. He will carry this tradition forward and ayurveda will definitely help the people in the long run. I wish the Governments of other States also take steps like our government and help the healers in reviving this art related to medical science as a whole.”

They claim that their tribe is doing healing since about 7 generations and will continue to do so in future, by spreading the knowledge of ayurveda.