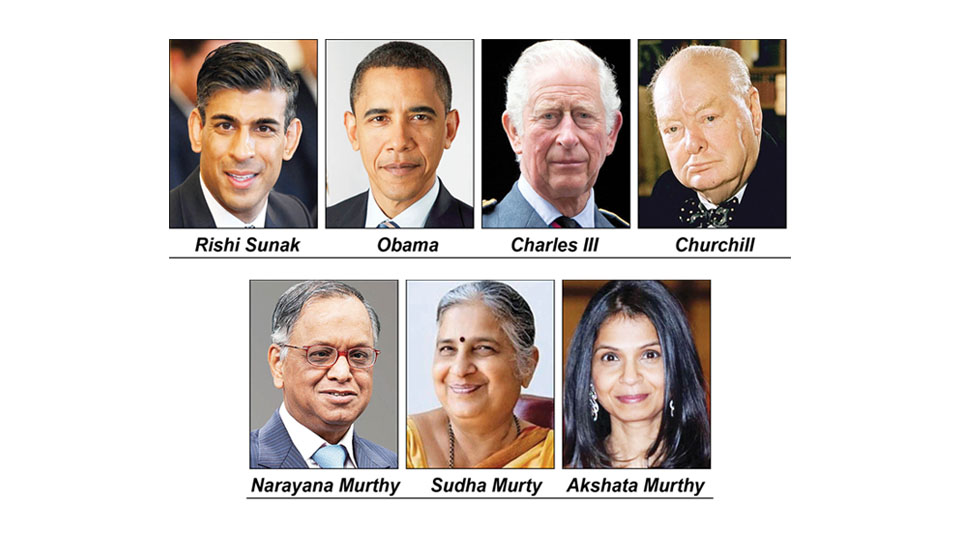 I am 100% sure the late lamented World War II British Prime Minister and hero, Winston Churchill (Sir Winston Leonard Spencer Churchill) must be turning in his grave at the tiny Parish Church close to Blenheim Palace, the house in which he was born.

Why do I say this? I say this because, Churchill being an India baiter all his life, despite serving in India, posted at our own Bengaluru and North-West Frontier (which was then part of British Indian Empire), would be the most unhappy person in today’s Britain to see an Indian-origin Hindu being elected by the Conservative Party as its leader and the King Charles-III handover the appointment letter to Rishi Sunak as the Prime Minister of Britain on 25th October 2022.

This appointment must have hit Churchill like a thunderbolt because he had entered the British Parliament as a Conservative Party MP in 1900. Of course, he had no qualms changing allegiance to Parties like his counterparts in India! Let it be.

The occasion seemed like a Deepavali gift for Hindus all over the world. Is it the sign of Hindu-India becoming the Vishwa Guru, an aspirational prognosis made by our Prime Minister Narendra Modi? Time alone can tell. After all, today we are observing the gradual, but significant presence of Hindus holding high offices in the governments of some countries globally, spreading its subtle political, spiritual and intellectual fragrance.

This year’s Deepavali must be remembered for years to come for another reason too — India beat Pakistan in the T20 played at Australia literally by a whisker. Happy days are here again for India that is Bharat!

I believe that all Indians, cutting across all kinds of social, political and religious barriers, are happy to see an Indian-origin person as the Prime Minister of England, a country that had colonised us for over 200 years. However, the most happy couple among them must be N.R. Narayana Murthy, the Founder of Infosys and his wife Sudha Murty, whose daughter Akshata Murthy is married to Rishi Sunak, to see their son-in-law, who had missed this high office to Liz Trussa 45 days earlier, making it lucky for him this second time.

And what a guy Rishi Sunak must be. Yes, we all know his super academic qualification and immense wealth to be a club member of the super-rich in England, beating even King Charles-III, the constitutional head who gave him the job! But to achieve all this at a young age of 42? Heavens. Oh, to be so young, trim, tall, handsome with a prominent nose, suggesting nothing of being nosy but of confidence, with a timber in his voice, being fluent in speech and gentle in his demeanour, is heaven indeed!! So agile, wakeful in response, he is the cornucopia of a charismatic personality!

We have indeed a Brown Sahib as the boss for the White Sahibs who once derisively called us, with swarthy visage, as natives. During the days of Raj, hotels in England used to display a board reading “Dogs and Indians not allowed.” It is said that when Jamsetji Tata opened Bombay’s famous hotel Taj Mahal, a tit-for-tat board was displayed reading “Dogs and Whites not allowed.” To jest, Rishi Sunak’s achievement seems to reaffirm the adage that ‘every dog has its  day’!

Rishi Sunak is the first Prime Minister of foreign origin of England giving the Englishman a thumbs-up. I remember former President of America Barack Obama in this context. He too was young in early 40s. Some called him the first Black President of America. But in fact he was not that black as seen in some parts of Africa, Kenya, Ghana for example. He is a mulatto — White American mother and black Kenyan father, hence of swarthy visage. Could he be also called as of foreign-origin? Well, well, in that case being a country of immigrants all their past Presidents should be of foreign-origin! Let me stop this jugulary, rigmarole and come to the point. What Barack Obama is to America, Rishi Sunak is for England.

India seems to have taken revenge against its former ruler by getting a person of Indian-origin to rule England and derived vicarious pleasure. Did India have the last laugh? The divided India’s Pakistan had its revenge earlier in a small way when a person of Pakistan-origin Sadiq Khan became the Lord Mayor of London. Who knows what is buried in the womb of time for England for its past sins of centuries of colonisation to be described by the historians as an empire where the sun never set. Now sun seems to have set on England itself!

As I was watching the TV, seeing the visuals and comments about the victory of Rishi Sunak, I was also envying him. I asked myself: What was I doing at age 42? Yes, I was a pen-pusher working to make both ends meet. Then I realised the power and glory of brain power over the brawn power. Which is why, I disagree with Thomas Jefferson, the third President of America who drafted the Declaration of American Independence. In great flourish he wrote in the opening sentence that, “we hold these truths to be self-evident, that all men are created equal…” Are all men created equal? No. Which is why Rishi Sunak is different from others in England. Same way all those great achievers — may it be scientists, doctors, engineers, artists, Generals or Prime Ministers — are different from the ordinary, the masses.  With this thought I watched the TV is peace, without envy, realising that I am made of poor quality clay by God or nature unlike these great achievers.

And I discovered one truth at the end: It appears that great English poet John Milton was once impelled by national pride to say that when God wishes to have some hard thing done, He sends for his English man.

How sad, the same God now sends for a Hindu man to fix his problem, ‘hard thing’ done. That is the irony of mankind.