Home » Feature Articles » Royal Chandeliers get their sheen back for Dasara 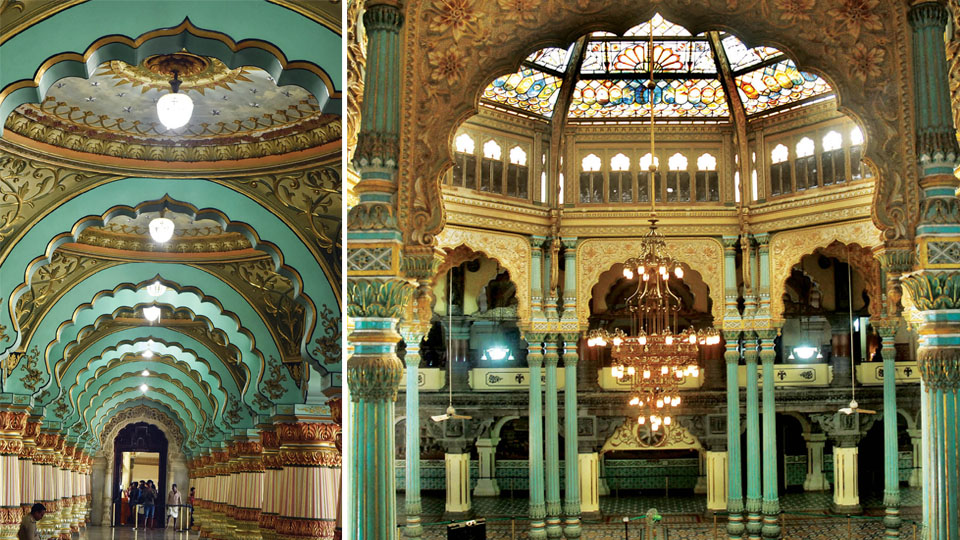 Royal Chandeliers get their sheen back for Dasara

The Mysore Palace Board, in-charge of maintaining the Palace, gets to work to prepare for Dasara months in advance. Over 150 chandeliers are cleaned and burnt bulbs inside them are replaced – a delicate work that needs a lot of careful planning.

“Chandeliers including big ones, domes, and pearl chandeliers, white, red and green ones are cleaned. To put up the scaffolding to clean them itself is a task as one wrong move could damage the precious chandeliers which were all imported from Czechoslovakia around 1926,” said Mysore Palace Board Deputy Director T.S. Subramanya, speaking to Star of Mysore.

Chandeliers adorn the Amba Vilas also called the Khas Durbar, Kalyana Mantapa where there are  dome-shaped chandeliers besides the ornate ones at the Public Durbar Hall dotting the ceilings with lovely paintings and matching Italian marble flooring.

Mysuru’s illustrious history is filled with stories of Maharajas. While they are perhaps best known for their able and pro-people administration, they have also left behind many stunning Palaces including the iconic Mysore Palace.

Apart from the famous illumination of the magnificent Palace with one lakh incandescent bulbs which is an enduring memory that every visitor who visits the Palace carries, the richness of the stunning Palace is enhanced a thousand times as one walks in the corridors of the monument and lifts one’s head up to see the nearly 150 stunning Chandeliers and other beautiful light fittings.

These softly clinking beauties hang from the ceiling of the Palace interiors, lighting up the space with a rich glow that reflects off the room’s gilded cornices, taking dazzled viewers back in time to when kings presided over their realms, and granted audience to their awed subjects.

As light goes through the designs, it creates a beautiful stunning shade of diamonds on the wall.

The Kalyana Mantapa where most of the royal weddings have taken place including the latest one of Yaduveer Krishnadatta Chamaraja Wadiyar and Trishikha Devi Wadiyar is to the South of the building. The Mantapa has an octagonal-gabled roof at the centre covered with stained glass and a gorgeous brass chandelier of Czechoslovakian-make hanging from the ceiling. It is really a sight to behold.

Amba Vilas (the Private Durbar Hall or ‘Khas Durbar Hall’) where the durbar is held every year during Dasara (Navarathri) is another attractive place. There are 17 chandeliers here with five in the centre and six on either side. There is also a beautiful crystal chandelier right where the Golden Throne is kept.

The whole place looks warm and welcome once the lights are switched on and the chandeliers come to life. One can go back in memory and imagine how the Maharajas held durbars as they, in their regal finery, walked with the courtiers hailing “Bahu Paraak, Bahu Paraak…” when they ascended the Golden Throne.

Just as one turns to the right from Private Durbar and enters the Public Durbar Hall, one can see hung 1,000-light fittings, 48 in all and 14 10-light fittings. Then there are 20 ‘Police Topi’ or ‘Helmet’ fittings. There are also 33 bead chandeliers made of glass. Between those are giant sculpted pillars painted with gold.

Public Durbar Hall is where public used to gather with Durbaris sitting on either side of the Maharaja who used to sit on the Golden Throne at the centre and hold Durbars. Here too, a visitor is transported to a world of magic and magnificence.

Here there are five white chandeliers with 50 bulbs each, two green and two red ones with 12 bulbs each, and right at the centre is a big chandelier with 100 bulbs. As one looks at the exquisite design of the ceiling and the chandeliers hanging, one wonders about artists of those days who painted those ceilings with such skill, dedication and passion.

There are two places from where the word ‘Chandelier’ is said to have been derived from. The first one says that it originated from the French word ‘Chandelle’ meaning candle. The earliest chandeliers were of simple design: Two wooden beams forming a cross, with spikes at the end to retain candles made of animal fat.

The other explanation is that it came from the Latin ‘Candela’ meaning candle and the word ‘Chandelier’ was said to be first used in English in the late 14th century.

The pioneers of chandeliers are said to be the Czechs. They have a rich history of glass making dating back to 13th century. The glassmaking bubble began to swell in heavily forested Czech regions — medieval glassworks required copious amounts of wood to heat ovens and produce potassium, a key component needed to melt glass.

Whole villages would pop up around isolated forest glassworks and would subsequently disappear or relocate once the area was deforested. Eventually, some Bohemian nobles actually banned deforestation for the purposes of glass production, hoping to preserve sections of woodland for forestry.

Considered just about as precious as gems and jewellery, Bohemian glass finery was sought after by monarchs and regents from France to India. Today, Czech chandeliers hang in Palaces from Versailles to Riyadh to the magnificent Mysore Palace.