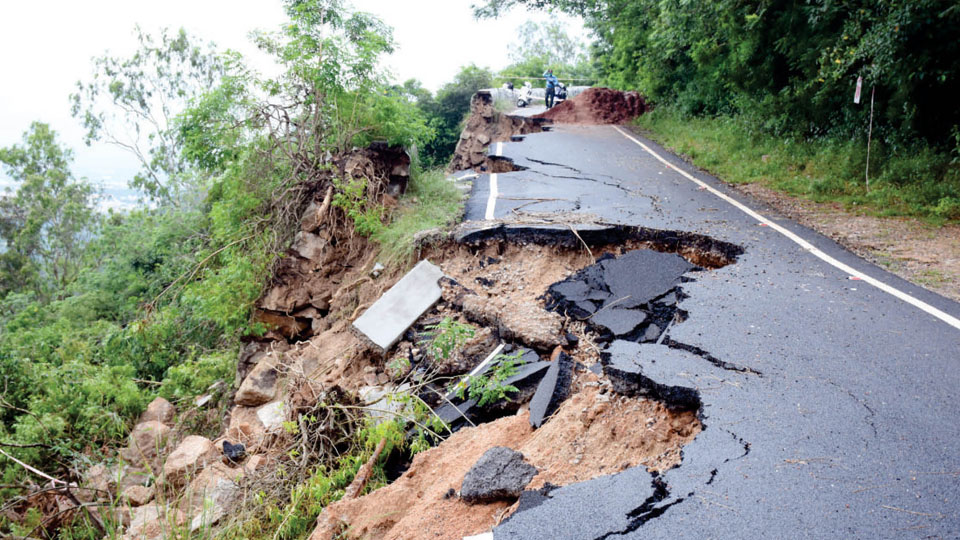 Mysore/Mysuru: Conservative estimates made by the Public Works Department (PWD) to restore the Chamundi Hill where massive landslides have occurred say that the State Government has to release a grant of Rs. 10 crore.

Confirming this to Star of Mysore, PWD Executive Engineer Harsha said that extensive damage has been caused between the View Point and Nandi Statue and the damages extend up to 400 metres.

Land has slipped from the part of the road at a couple of places and as the mud has slipped, it is difficult even to walk at some stretches, he added. Scientists from the Indian Institute of Science (IISc), Bengaluru are expected to submit a detailed report on the landslides and how to construct the retaining wall using Geo Trail Technology to prevent future landslides, he said.

The Government has already been apprised of the fund requirement and Mysuru District Minister S.T. Somashekar has assured that he will get funds to restore the Hill that has a lot of spiritual significance,  Harsha added.

Meanwhile, speaking to reporters in the city yesterday, Somashekar said that though an initial estimate of Rs. 9.5 crore had been prepared for the repairs, officials had been told to prepare a fresh report after the rains stop fully.

He said that crops on 500 hectares of land and 1,600 km of road have been damaged in Mysuru. “The Deputy Commissioner had sent a detailed report on the damage caused by rain in the district to  Chief Minister Basavaraj Bommai,” he said.

READ ALSO  The Nightfall in ‘Navarathri’

The DC has mentioned in his report that damage was caused to 1,994 houses. 87 were completely damaged and 1,907 were partially damaged. The rains had also claimed three lives.  While 1,100 km of roads in urban areas of the district had been damaged, 500 km of the roads in rural areas had been damaged in the rain, he said. A total of 67 school buildings had been damaged while 133 electric poles had collapsed.