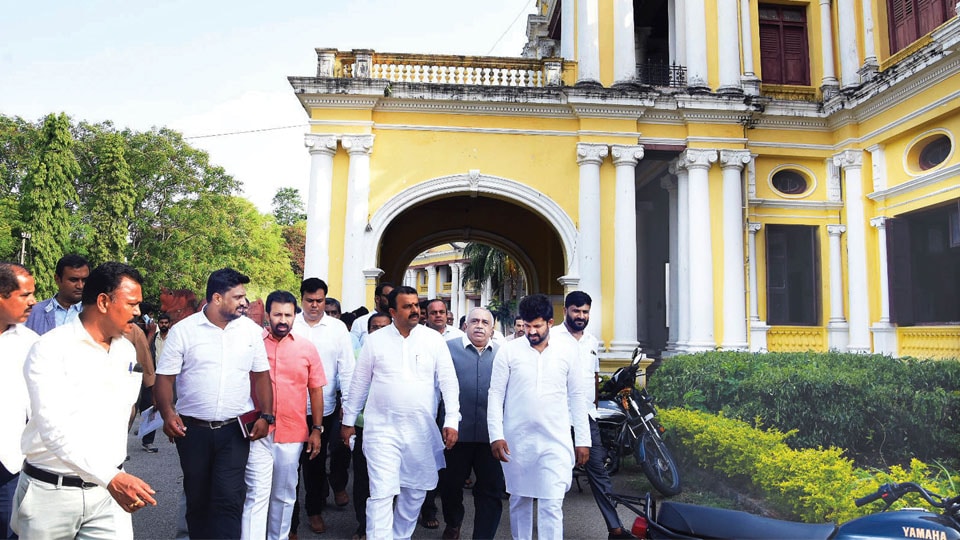 Mysore/Mysuru: With the State Government deciding to shift the Centre of Excellence for Studies in Classical Kannada (CESCK) to the spacious and artistic Jayalakshmi Vilas Palace, Minister for Kannada and Culture V. Sunil Kumar visited the iconic structure last evening. The CESCK functions from its current location at National Centre for History of Science (NCHS) of University of Mysore (UoM), which is housed in the old Tahsildar office building in Manasagangothri campus opposite Premier Studio (now demolished) on Hunsur Road.

He said that though CESCK was established in 2015, there was no arrangement for a permanent building for the institute to operate. With the CESCK being shifted to Jayalakshmi Vilas Mansion now, a Memorandum of Understanding (MoU) will be signed with University of Mysore.

An action plan to repair and restore Jayalakshmi Vilas Mansion with an estimated cost of Rs. 27 crore is being prepared and he would speak to the Chief Minister for fund release soon. Even the Union Minister for Education Dharmendra Pradhan has responded positively to improve the functionality of CESCK, he added.

The State Govt. has drawn elaborate plans to accord importance to Kannada language and culture and would strive to enrich them. The Classical Kannada Centre will play an important role in this direction and all efforts will be made to allow the institution to function in a fruitful manner, Sunil Kumar added.

Sharathchandra of Deccan Heritage Foundation that is carrying out the restoration of Jayalakshmi Vilas Palace as per the directive of the University of Mysore said that as the Classical Kannada Centre will be shifted to this venue, comprehensive repairs to the Mansion are required.

“The ceiling of the Mansion is dilapidated and needs end-to-end repairs and restoration. Many places of the ceiling need reconstruction as extensive damage has occurred due to water seepage. The entire electrical wiring must be replaced and the museum will be retained with a new look,” he added.