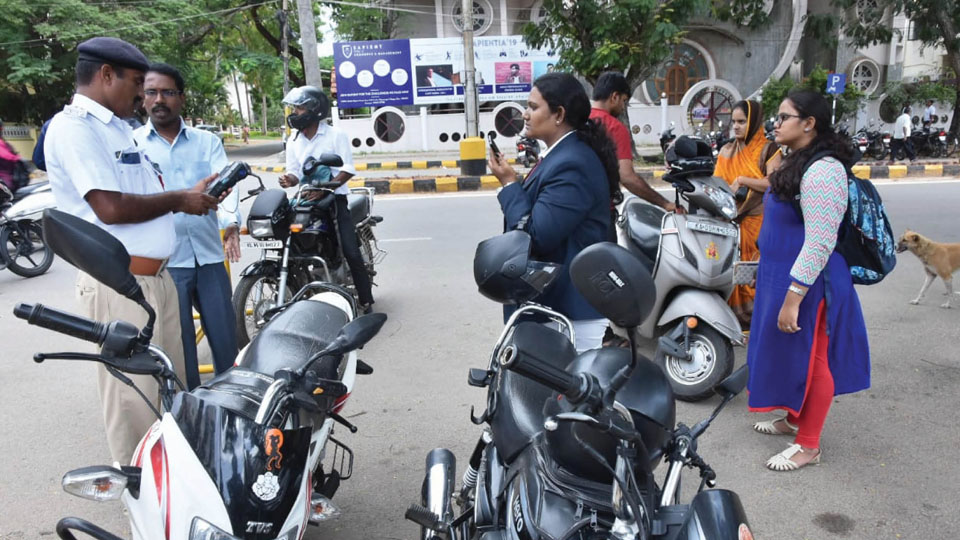 Mysore/Mysuru: If you find Traffic Cops lurking at corners of streets every other day, don’t be surprised. Apart from random checking of vehicles and catching offenders, they are hell-bent on spotting vehicles that have fines amounting to more than Rs. 10,000.

In Mysuru, there are 2,883 vehicles — both two-wheelers and four-wheelers — that have pending fines amounting to more than Rs. 10,000.

In all, 86,775 cases have been booked so far against such vehicles for various offences and the pending fine amount is Rs. 4,00,54,400. That means, on an average, each vehicle has over 30 traffic violation cases against them.

As soon as any violation is caught on any of the more than 60 CCTV cameras installed at various junctions in city, visuals are caught at  Traffic Command Centre and notices are sent to the addresses of the offenders.

“These people have not responded to the notices and till now we have 2,883 vehicles that have more than Rs. 10,000 as fine amount. We want to bring discipline and make the repeat offenders accountable and responsible,” Traffic ACP S.N. Sandesh Kumar told Star of Mysore this morning.

Armed with blackberries and tabs, city Traffic Police are now intensifying the random checks to spot the vehicles that have huge fine amounts and whose owners have not bothered to pay up the fine.

“People must check pending traffic violations on their vehicles and pay the fine to avoid action. If we catch such vehicles, we will collect the entire fine amount from the owner and only then release the vehicle,” he said.

Already, in the recent months the city Traffic Police personnel have gone all-out to enforce the laws. Scores of Policemen are seen standing after nearly every traffic signal, signalling to errant motorists that breaking the law will not go unpunished.

After the lockdown, many motorists are taking liberties on the road and commit violations. From going to their doorstep to catching them at signals and parking lots, the Police have been collecting pending fines from all the motorists. However, despite efforts, only a small portion of the fines have been collected. The Traffic Police now want to send out a strong message to the public that they cannot escape after committing traffic violations.