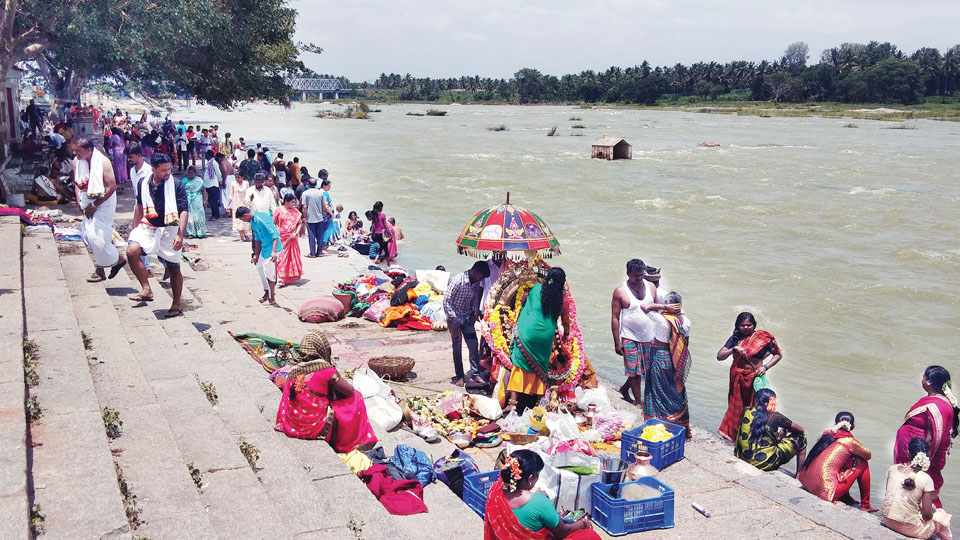 Srirangapatna:  Thousands of families are converging at the historic town of Srirangapatna to pay respects to their elders in the form of offerings during this season of Pitru Paksha.

Every year, the river banks in and around Srirangapatna including Paschimavahini, Sopana Katte, Snana Ghatta, Gosai Ghat and Cauvery Sangama draw large crowds for this ritual. While all 15 days during the waning phase of moon or ‘Pitru Paksha’ are considered auspicious, the ninth day or ‘Avidhava Navami’ as well as the last five days culminating in Mahalaya Amavasya are significant and most suitable for this ritual.

Dressed in traditional attires, members of Hindu community congregate on the banks of River Cauvery for this special purpose. While hotels in and around Srirangapatna are making a brisk business with a long queue of tourists waiting to get their rooms, the Srirangapatna Town Municipal Council authorities are collecting Rs. 100 from each family who come here to perform the ritual.

After performing purifying bath, they wear a dhoti and a ring of ‘dharbe’ grass in their ring finger. Pinda-Daan (offering of Pinda or cooked rice or barley floor balls mixed with ghee and black sesame seeds) along with ‘Tarpana pradana’ (offering of water with black sesame seeds) is performed to gratify the souls of departed ones and seek their blessings for health, wealth, knowledge and longevity and also ensure that departed souls ascend to heaven and ultimately attain Moksha.

‘Pitru Paksha’ ends on Sept. 28, the day of Mahalaya Amavasya. People who come to Srirangapatna for rituals, however, say that there are no safety measures in place. The water release from the Krishna Raja Sagar Dam stands at over 8,500 cusecs. That means, water at Srirangapatna is a bit turbulent. “The Town Municipal Council has not installed grills near the river banks preventing people from being washed away and nor there are divers to rescue people in case of accidents,” said a priest. He adds that recently, a businessman from Bengaluru was washed away in Srirangapatna while immersing his mother’s ashes at Triveni Sangama.

Death and afterlife have remained an enigma from ages. Even the earliest civilisations and cultures across the world have their own interpretations and rituals that are performed after the death of their kith and kin. These hugely varied traditions reflect a wide variety of beliefs and values.

Belief systems of Hindu religion is all about aligning human life to cosmic dimensions of nature which are at work from microcosmic to macrocosmic level. Dark fortnight, or the 15-day lunar period, called ‘Pitru Paksha’ with its last new moon day or Mahalaya Amavasya is revered and honoured as an appropriate time to express gratitude for generations of ancestors who lived before and gave life to us. During this period, the first produce of new crops is offered as ‘pinda’.

Considering it as a duty to gratify souls of departed loved ones, people carry out ‘ Shraddha’ or rituals during the death anniversary on a stipulated date in a calendar year. Those all who wish to carry out this sacred act only once every year and others who miss to perform this obligation consider ‘Pitru Paksha’, in particular Mahalaya Amavasya, as most appropriate time to carry out necessary rites like ‘Shraddha’ and ‘Tarpana’.

Hindu scriptures mention three kinds of obligations —Deva Runa (indebted towards Gods), Rishi Runa (indebted towards sages) and Pitru Runa (indebted towards forefathers and elders). It is believed that during ‘Pitru Paksha’ fortnight there will be heightened awareness as the energies of disembodied beings hangs alive in the air and departed souls will be roaming free in their ‘Pitru Loka’ to receive offerings on earth. Rituals and prayers performed during this fortnight carry a special merit, in particular on Mahalaya Amavasya, the universal day of remembrance.

While these sacred rites can be performed near any ponds or rivers, Hindu tradition suggests carrying out these rituals in Gaya which is the holy abode of Vishnu. Srirangapatna is considered suitable for this purpose. Sriranganathaswamy temple located in this town at starting point of the upstream, where the deity is also known as ‘Adi Ranga’, is dedicated to Lord Ranganatha, a manifestation of Lord Vishnu.