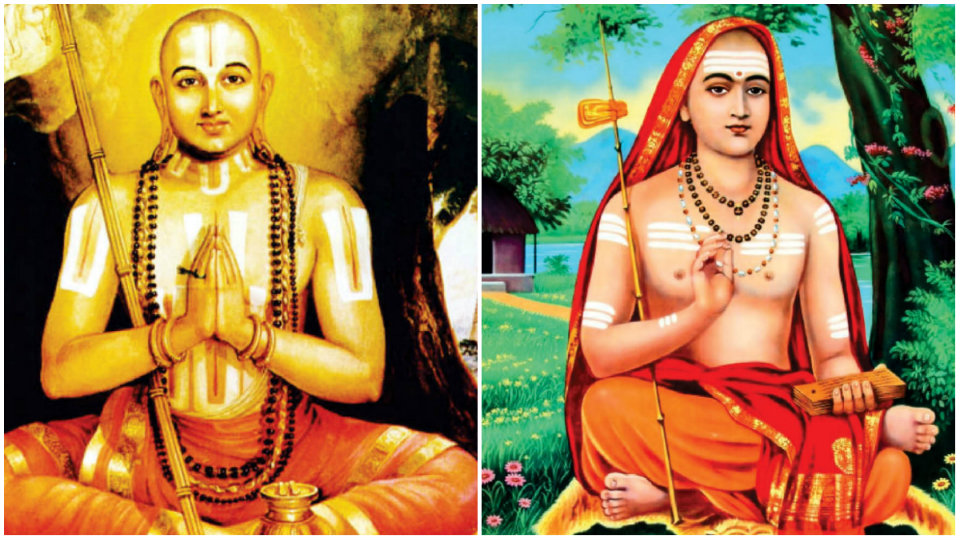 This country is studded with hundreds of religious teachers specially known as Acharyas. Acharya is not just a teacher or a Professor in a University but a Saint who guides the people. There may be minor or major differences among these religions but ultimately all roads lead to the same goal, that is, permanent deliverance from the miseries of this temporary world. This is not new because right from the Saints of Upanishads, Buddha and others harped on this point again and again.

Under this background, two Acharyas, namely Sri Shankaracharya and Sri Ramanujacharya and their life and philosophy are sketched here briefly. This year their jayantis were celebrated on 9.5.2019 with great devotion. This is particularly true in Sringeri and other sub-Shankara Mutts all over the country including New York where there are devotees of these two Acharyas.

The name Shankara means (Sham + Karoti), doing good to all human beings. Sri Adi Shankaracharya is one of the brightest stars in the cultural history of India. Even English and American Philosophers remember his name respectfully. The best Indian example is our former Indian President Dr. Sarvepalli Radhakrishnan. Emerson of America also had respect for Sri Adi Shankaracharya.

Sri Adi Shankaracharya originally hailed from Kerala, generally referred to as God’s own country. In Kerala there is a place called Kalady or Kalaty on the banks of river Poorna, near modern Cochin. Adi Shankara’s father and mother were Shivaguru and Aryamba. They were Nambudari brahmins. His mother Aryamba had great difficulty in bringing water and young Shankara performed a miracle whereby the Poorna river began flowing near their home. Such miracles are plenty in the life of Adi Shankaracharya. Shankara had no interest in mundane life and hence one day he became a Sanyasi (Monk) with the permission of his mother. He left home and began preaching his philosophy called Advaita which means that there is no scope for a second philosophy. Thus Advaita became famous all over the world. Scientists even today state two energies cannot occupy the same place at the same time. Thus Shankara’s Advaita has been successfully tested by the scientists also.

Adi Shankara’s watch-words were Aham Brahmasmi, meaning I am the Brahman which means everyone in the world is a Jivatma (living human being) while Paramatma (Almighty) is the Brahman. He should not be mistaken for the world creator Brahma, one of the Trimurtis, the other two being Shiva and Narayana.

During Adi Shankara’s period there were many unholy practices and Shankara asked people not to become a prey and hence he preached the worship of five Gods and Goddesses called Panchayatana. This is being followed in almost all the temples which follow Adi Shankara’s philosophy. Adi Shankara selected four Shankara Peethas (centres) in four directions and Sringeri was the Southern one. Thus devotees feel proud and happy that Adi Shankaracharya selected Sringeri (Rishyasringapura) as the Southern centre. Thus Sringeri centre has an unbroken successive Jagadgurus from Adi Shankaracharya to the present His Holiness Sri Bharathitirtha Mahaswamiji, who is the 36th Pontiff of Holy Sringeri centre, along with Sri Vidhushekhara Swamiji. Because of these two Pontiffs, a large number of devotees including politicians visit Sringeri. The Mahaswamiji blesses them all without any consideration of caste and community. The only requirement is that they should have devotion to the deities and Jagadgurus of Sringeri.

In addition to ordinary devotees and politicians, special mention should be made of the Maharajas of Mysore including Krishnaraja Wadiyar IV and Sri Jayachamaraja Wadiyar. Actually the latter Maharaja has composed many songs in praise of Gods and Goddesses like Shiva, Ganapathi, Surya, Durga, Lakshmi, Saraswathi and others. Unfortunately the exact date of Adi Shankara is not known. Historians have suggested a rough date between 788 to 820 AD. Thus he lived just for 32 years and did so much of work. In about 820 AD he went to Kashmir and merged with the Almighty.

Now let us consider the other Acharya Sri Ramanujacharya. He lived from 1017 AD to 1137 AD. He propounded Vishishtadvaita (qualified monism). He belonged to Sri Yamunacharya group. Sri Ramanujacharya was born in Sri Perambadur near Chennai in 1017 AD. His father was Keshava Somayaji and mother Kanthimathi. His first marriage did not yield desired results. After sometime he had his second marriage with Rakshambal. In the meantime his father died. Then he continued his Vedic education under the able guru at Kanchipurna under Yadava Prakasha. Then there was a difference of opinion in interpreting the meaning of Vedas. Hence he left being a follower of Yadava Prakasha and Sri Ramanuja began to think independently.

Whenever Ramanuja was in a dilemma, saint Kinchipurna used to explain and add strength to his way of thinking. At Srirangam, Saint Yamunacharya was seriously sick and the Mutt was in search of a successor. This good news reached the ears of these people as they had heard the name of Sri Ramanujacharya. It was decided to make him the successor at Srirangam. Immediately through another disciple Mahapoorna they arranged to reach Srirangam. Unfortunately before Sri Ramanuja could reach Srirangam, Sri Yamunacharya had breathed his last. His three fingers had been bent and before the public it was declared that he will fulfil the wishes of his guru. These three were to write a Vishishtadvaita commentary for Brahmasutras, Vishnu Sahasranama and a commentary on Divyaprabhandas (holy works) in Tamil language. This became the foundation for the writing of Sri Vaishnava commentary on Brahmasutras.

In the meantime there was difference of opinion between Sri Ramanuja and his wife Rakshambal. Including all her requirements such as money and with her consent, sent her to her mother’s house. This made him free to concentrate on his philosophical pursuits. And he became a Sanyasi (monk). Many followed Sri Ramanujacharya as his disciples. Then he came and settled down in Kanchipuram Mutt. This became highly useful to Sri Ramanujacharya to spread his holy message of Vishishtadvaita. After sometime he left Kanchipuram and went back to Srirangam and took upon the responsibility of being a pontiff of the Mutt at Sriranga. Then he got the mantropadehsa (holy teaching) from his Guru Goshthipoorna. The Guru had instructed that this teaching should be kept secret and if this is not followed, he will go to hell (Naraka).He climbed the gopura of the temple and announced that secret teaching. The Guru said you will go to hell because of this mis-adventure. Sri Ramanuja said even if he goes to hell, let all people go to towards salvation. That was his love for the common men and women.

From there he came to Mysore and received a wonderful welcome. Hoysala Bittideva got holy teachings from Sri Ramanujacharya and got a new name Vishnuvardhana, meaning whose strength increases from Vishnu. As per the wishes of Sri Ramanujacharya,Vishnuvardhana built the Chennakeshava temple at Belur which became famous as Vaikunta on earth. Through the town Saligrama he came to Tonnur (Tondanur meaning the place of devotees of Vishishtadvaita) and began spreading the texts of Vishishtadvaita. Then he stayed in Melukote for about fourteen years and went to Srirangam. He arranged for the worship in Vaishnava temples according to Pancharatra system.

The greatness of Sri Ramanuja is that he agreed to teach the Vedic texts to all people provided they had devotion (bhakthi). He wrote commentaries on Brahmasutras and Bhagavad Gita as per the Vishishtadvaita point of view. He was also a great author and wrote commentaries on Sri Bhashya, Bhagavad Gita. Gitabhashya is famous among them. His other works are Vedantha Sangraha, Gadyatraya, Vaikunta Gadya etc.

After the death of Sri Ramanuja, his disciples were divided into Tenkalai and Vadagalai based upon the differences in commentaries on Vedic texts. He popularised works of Alwars, the great devotees. Finally he cast off his body in 1137 AD.

On this auspicious occasion of their birthdays, it is our duty to pay homage to these two Acharyas and make a solemn pledge to follow the principles enunciated by them.