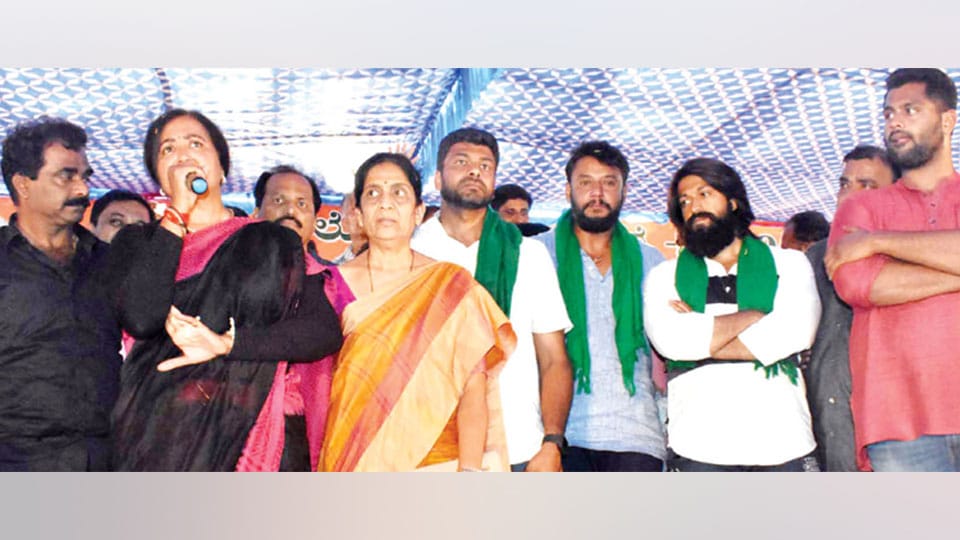 Mandya: The high-voltage campaigning for the Mandya LS Independent candidate Sumalatha Ambarish with the stars of Sandalwood Darshan and Yash in attendance, ended yesterday.

The fierce electoral battle between the Congress-JD(S) coalition candidate Nikhil Kumaraswamy and Sumalatha Ambarish witnessed in the sugar bowl Mandya is unprecedented and the stakes are really high with the high-profile supporters of both the parties going all out to ensure their respective candidate’s victory.

The war of words and challenges thrown by the stars to Chief Minister H.D. Kumaraswamy (HDK) had the supporters and followers cheering for more.

‘Challenging Star’ Darshan Thoogudeepa openly questioned HDK and his son, who claim to be sons of the soil, to milk the cow for just a glass of milk. Let them tell what food is given to a cow when it gives birth to a calf, he challenged the father-son duo.

He was speaking at the Swabhiman (Self-Respect) Rally organised by Independent candidate Sumalatha Ambarish here yesterday and in a loud voice said, “If Amma wins not only the whole country but also the whole of the world will know ‘what Mandya is’.”

Mocking at Kumaraswamy, he said that he should thank the CM for making him (Darshan) well-known in the whole of Karnataka. He called upon the voters to work hard for another two days and ensure the victory of Sumalatha without falling prey to the allurements and losing self-respect.

Recalling HDK’s statement targeting Sumalatha’s caste while addressing an election rally in Mandya, Past President of Indian Medical Association, Karnataka Chapter Dr. H.N. Ravindra, who had started the Mandya Swabhiman Movement, in a scathing attack on JD(S), asked the CM whether TDP leader and Andhra CM Chandrababu Naidu, who came to attend the election rally of Nikhil Kumaraswamy in Pandavapura on Monday, was a ‘Gowda’ or ‘Naidu?’

“It is good that Sumalatha Ambarish contested in the elections, otherwise the dark side of Kumaraswamy would not have been known,” he teased.

Another star Yash, speaking with a typical Mandya accent, urged the voters to cast their votes for Serial Number 20 with the symbol of a man blowing a trumpet (Kahale).

During the elections we had to keep quiet to all the barbs thrown at us without reacting,  now the time has come for the reply, said Yash.

Late Sumalatha-Ambarish’s son Abhishek, launching a tirade against JD(S) leaders, revealed that it was he (Abhishek) who had requested CM Kumaraswamy for his father’s body to be taken to Mandya for the people here to pay their respects and not as claimed by the CM that it was his (CM) son Nikhil who had given the idea.

Seeing the huge gathering of fans in the rally, Sumalatha became emotional. In the interest of security, the vehicles on Bengaluru-Mysuru Road were diverted towards Maddur and Malavalli. The vehicles entering Mandya were banned.