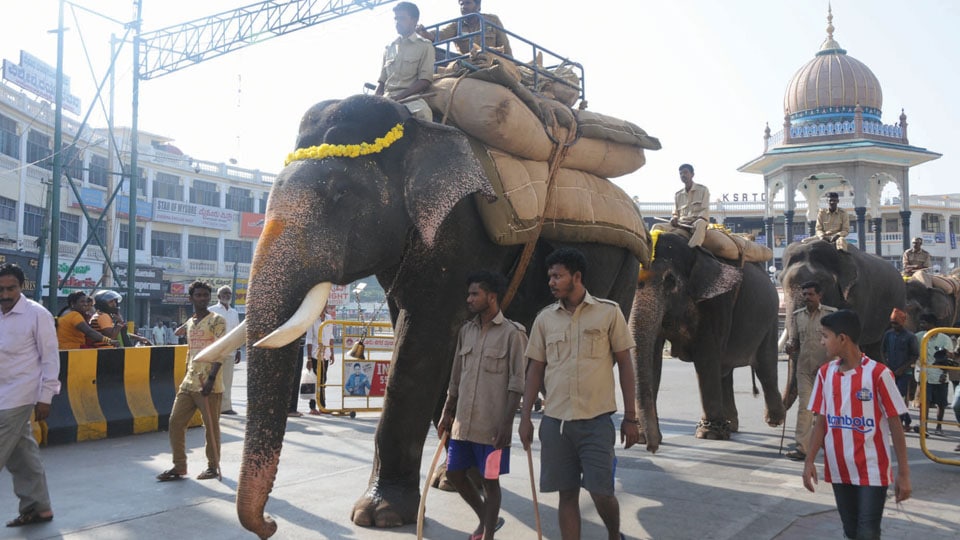 Mysuru:  The sandbag carrying practice for Arjuna, the Howdah Elephant, began yesterday as part of rehearsal for the Dasara procession scheduled to be held on Oct.19. As the Golden Howdah weighs 750 kg, the Forest Department mounted sand bags to help Arjuna bear the weight.

On the first day, sand bags weighing 600 kgs were mounted on Arjuna with help of a crane at the Palace premises. The weight will be increased gradually in the coming days. And as if it is a child’s play for him, the mighty Arjuna carried the weight with ease.

Soon after the sand bags were mounted on its back, Arjuna, accompanied by other Dasara elephants, walked out of Balarama Gate around 7.45 am. The march passed through K.R. Circle and Sayyaji Rao Road before reaching the Bannimantap Grounds. A rest of five minutes was given at regular intervals to Arjuna at Ayurveda Hospital Circle and Highway Circle.

The Forest Department officials brought down the sand bags from Arjuna’s back with the help of a crane at Bannimantap Grounds. The elephants covered nearly 5 km distance on the procession route in about 75 minutes before returning to the Palace.