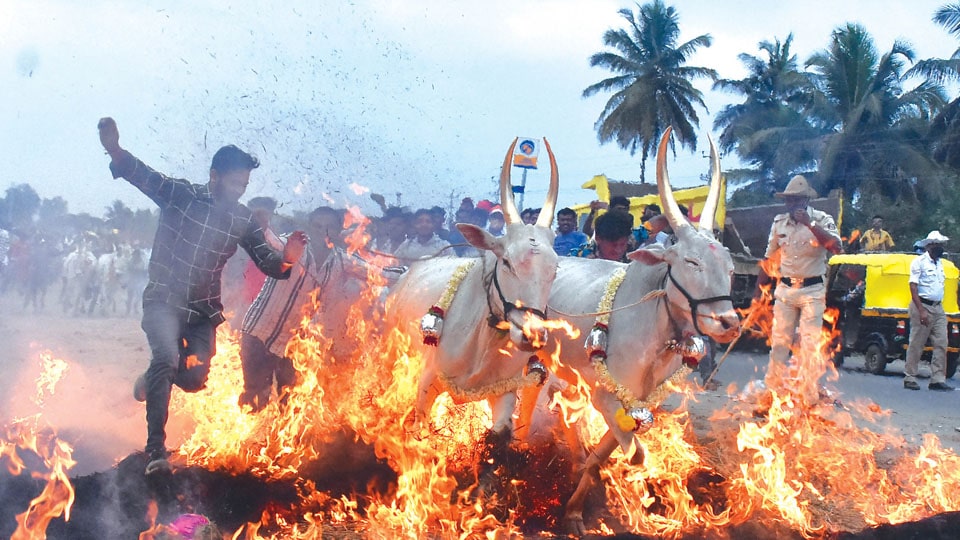 Sankranti celebrated with fervour in city

Mysore/Mysuru: Amid the COVID-19 pandemic, Makara Sankranti, the harvest festival dedicated to the Sun God, was celebrated with religious fervour across the city and in villages.

Although the grandeur was not on par with previous years, a large number of women were seen visiting houses, performing the practice of Ellu Birodhu, which involves carrying a plate containing Sesame Seeds (Ellu) and Jaggery (Bella) and other ingredients like fried groundnuts, coconut, sugarcane  pieces and sweets with them to offer others.

As part of the festival, women also drew colourful rangolis outside their homes and decorated the front doors with mango leaves and flowers. The deities were worshipped and offered Pongal, Ellu-Bella and other ingredients as Nyvedya.

Special pujas were performed at all temples in city, with devotees thronging them since early morning to offer prayers on this special day. Most temples of the city witnessed rush with devotees lining up in large numbers for seeking the blessing of the deity.

The festival also featured one of the customary rituals especially in rural areas — Kichhu Hayisuvudu — a ritual, where cows and oxen are made to leap though fire. It is believed that the heat of fire will kill the germs on the animals’ body.

The cattle were colourfully decorated and their horns were painted in different colours. Cows and sheep were decorated with garlands, bells, flowers etc., before walking them through fire. It is widely believed among devotees that this  ritual will bring them good fortune and protect them from any harm or evil.

READ ALSO  Colleges ready but students not yet !

The  Kichhu Hayisuvudu ritual at Siddalingapura on Mysuru-Bengaluru Highway, which has earned Statewide attraction for its speciality and popularity, drew thousands of people from neighbouring villages and towns this year too, despite the COVID-19 contagion. The  large gathering at the spot watched keenly as a pair of cow, garlanded with apples and decorated with flowers and anklets, were made to leap through the fire.

As the ritual was about to start in the evening with the onset of dusk, the jurisdictional Metagalli Police objected to it saying that there was no permission. However, the villagers persisted that this was the customary ritual, which is going on for decades, is well known and there was no need for any permission. After some argument and the intervention of village elders, the ritual passed off peacefully at the service road next to the Highway at Siddalingapura, which is being laid as part of the upgradation of the Highway to 10–lane Highway, including service road. The ritual went through without any hiccups much to the delight of the large crowd.

In another event organised by Chamaraja Unit of BJP, heaps of crops, cereals and millets were worshipped (Dhavasa dhanya puja) and puja to cow was performed at Mahadeshwaraswamy Temple in Vinayakanagar (Paduvarahalli). Several farmers were feted on the occasion. MLA L. Nagendra presided.