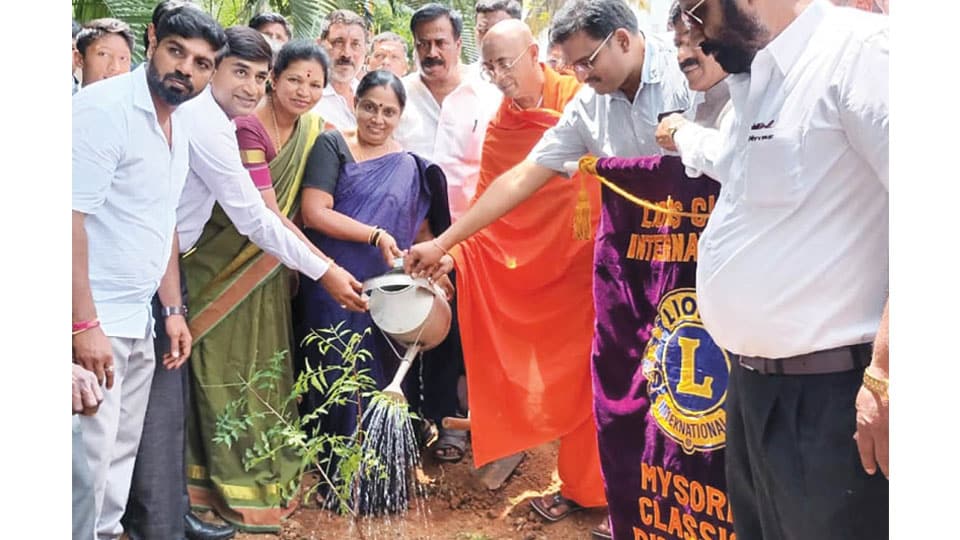 Mysore/Mysuru: The month-long sapling planting campaign ‘Sasyaradhana’ was launched at a programme held at Shikshkarni Central School in Hebbal here on Friday.

Speaking after inaugurating the programme by lighting the traditional lamp, Mysuru City Corporation (MCC) Commissioner G. Lakshmikantha Reddy said that it is the pride of every Mysurean that Mysuru is called as the ‘City of Parks’ and ‘Green City.’ “Even Bengaluru cannot beat Mysuru when it comes to greenery.  There are 600 parks in Mysuru,” he added.

“Thousands of saplings are being planted in the school premises and surrounding areas which is a great step toward conservation of environment,” he said and lauded the initiative besides urging every individual, organisation and institution to be more responsible in conserving and protecting nature.

Former MLC and Samiti Chairman D. Madegowda said that for the citizens of Mysuru want to stay healthy, it is not only the duty of MCC to keep everyone healthy, but it is the responsibility of every individual to maintain hygiene and healthy environment.

J.K. Tyres Pvt. Ltd, Mysuru, Vice-President Eshwar Rao in his address said “It is difficult to find pure air to breathe in New Delhi due to global warming. Mysuru is the safest place in all terms. This is because of the cooperation of the people who have succeeded in maintaining greenery in city. There are people who are  killing trees.”