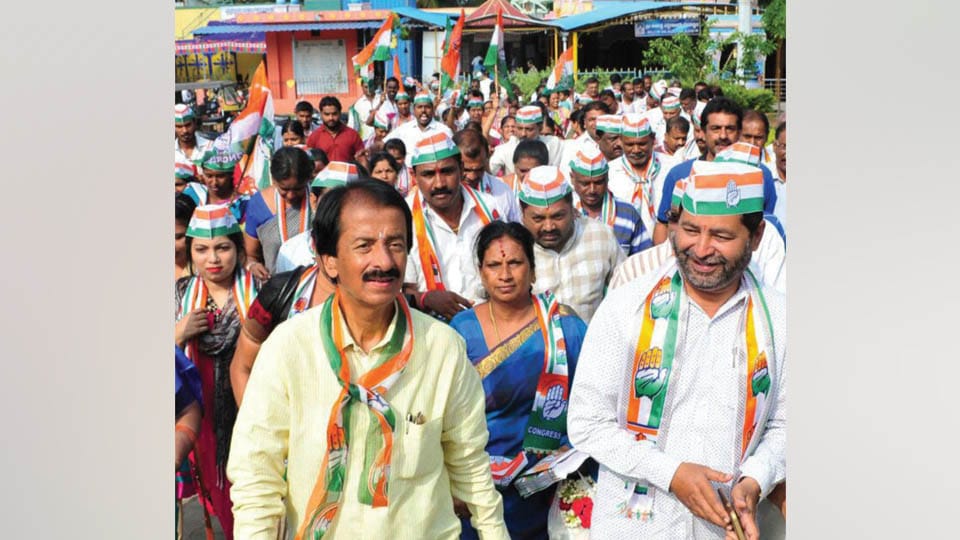 Mysuru: Asserting that he was satisfied with the initiatives taken by him for the development of Chamaraja Constituency, Congress MLA Vasu has expressed hope that the people of the Constituency would re-elect him.

Maintaining that people will identify him for the works he had done for the Constituency over the past 5 years, Vasu said that there were many people unaware about his works and as such he was campaigning across the Constituency extensively to sensitise the voters on his works.

Claiming that he was getting good response from the electorate, Vasu reiterated that he was cent percent sure of getting re-elected.

Admitting that his opponents were equally formidable, Vasu maintained that he would not speak lightly of his opponents.

Listing out the achievements of the Congress Government, Vasu said he was seeking votes based only on his performance and not by attacking his opponents.

Explaining his achievements in the past five years, Vasu highlighted some of them which included establishment of Jayadeva Hospital and Trauma Centre on KRS Road, building additional blocks at Maharani’s college, widening of KRS road from city Railway Station to Vontikoppal, roads around University of Mysore campus and the stretch of Vinoba road in front of Jaladarshini Guest House, among others, improvement of underground drainage systems, construction of additional floors on ED Hospital building, setting up of a super-speciality hospital etc.

Admitting that there were some hurdles in the distribution of Ashraya houses, he said that measures will be taken for distribution of houses after clearing all the hurdles.

Explaining his plans for the next 5 years if he is re-elected, Vasu said that he would take up issues such as Lansdowne building, Devaraja market building and infrastructure development in old areas such as Kumbarakoppal, Lokanayakanagar and Metagalli.

He further said that he would make a big push for infrastructure development across Chamaraja Constituency.

Recalling his days as city Mayor almost three decades ago, Vasu said that as Mayor he got an opportunity to host the 60th Kannada Sahitya Sammelana in Mysuru.

Pointing out that all the MCC Corporators then had extended their co-operation to him, Vasu recalled the warmth and support he got from the Corporators and the MCC staff then.

Claiming that he has earned the confidence of all sections of the society, irrespective of caste and creed, the Congress       candidate said that the party workers were working with conviction for him. Reiterating that the electorate will bless him once again considering his performance as the Constituency MLA for the past 5 years, he said that he was looking forward to another term so that he can complete his agenda of development.

ONE COMMENT ON THIS POST To “Satisfied with development works taken up in Chamaraja Constituency: MLA Vasu”