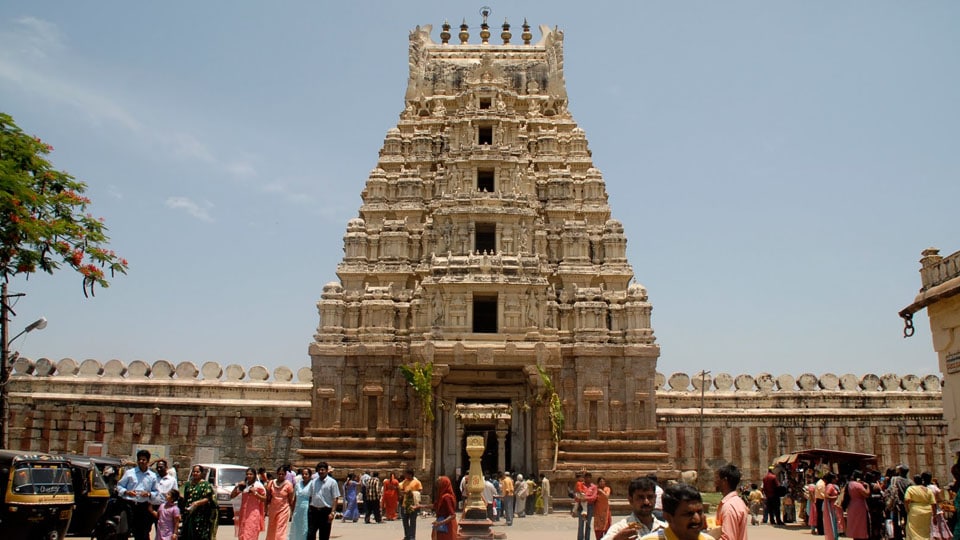 The first glimpse of Srirangapatna ruins as trains from Mysuru trundle over the bridge sets one thinking of the glorious past. A visit to the place, however, will surely disappoint most as there is lack of documentation and conservation of old buildings and sites. Fortunately, Mysore School of Architecture and University of Liverpool have collaborated to document this temple town and its ruins. This Weekend Star Supplement takes its readers through the conservation efforts and the documentation process.

India is on development path and the development is so rapid that small towns are merging into big cities and the concomitant problems are being ignored. Srirangapatna, the historically significant town in transition, which is about 21 km from Mysuru, is a good example of how it has undergone major changes over centuries.

The town has been under strong urban impact due to expansion of the existing highway that divides the island town in two. The tourist inflow has also increased over the years. Also due to the growing real estate investment and its proximity to Mysuru, such developments have significantly impacted upon Srirangapatna’s heritage value, despite it being earmarked as a Historical Town. 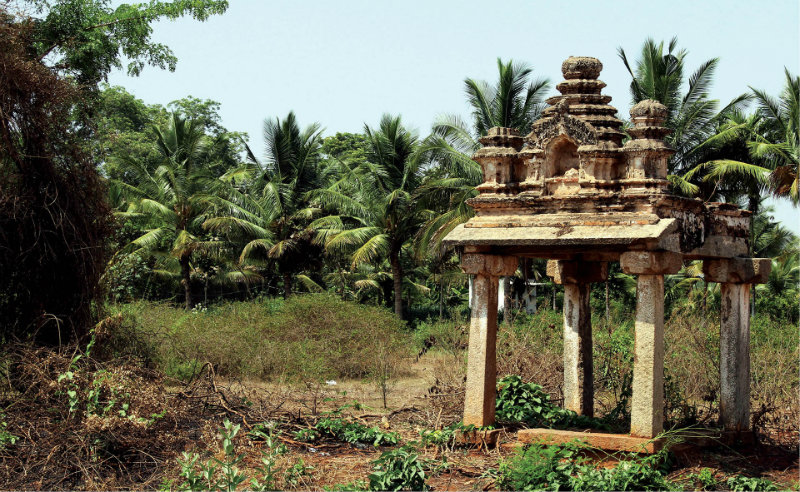 This is the precise reason why Srirangapatna was chosen for a collaborative documentation and to this effect, a Memorandum of Understanding was signed between the newly established Research Cell at Mysore School of Architecture (MSA) and University of Liverpool.

The six-month study was done under the guidance of Prof. Soumyen Bandyopadhyay, who is the Sir James Stirling Chair in Architecture at the Liverpool School of Architecture, University of Liverpool and Prof. D.S. Ramakrishna Rao, Design Chair, and Co-ordinator, Research Cell of MSA. Other contributors to fieldwork and documentation were the team from England comprising Dr. Giamila Quattrone, Dr. Martin Gofriller, Claudia Bruguglio, Desiree Campolo, and architects Shreya V. Pai, S.P. Preetham, Balaji Venkatachary and Shruti M. Desai of the Research Cell of MSA. 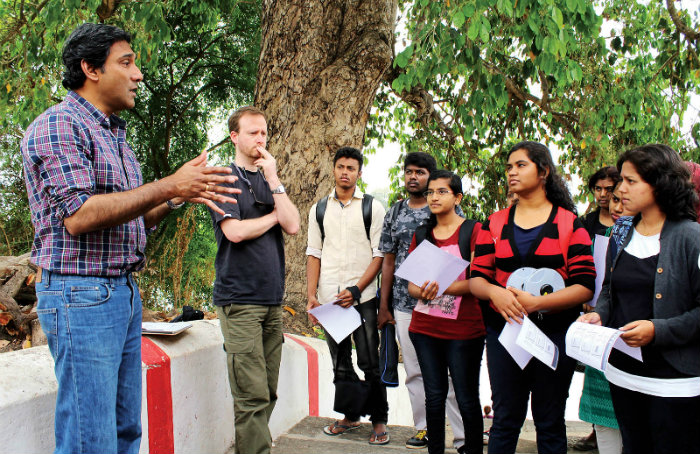 The study, titled “The Srirangapatna World Heritage Site Documentation and Development Project”, was undertaken from March to September 2017 as the Heritage aspect of Srirangapatna must be protected at any cost. Hence the Mysore School of Architecture under the MoU with Centre for the Study of Architecture and Cultural Heritage of India, Arabia and the Maghreb (ArCHIAM), based at University of Liverpool School of Architecture, took up the study of three sites in the island town which are a part of the Phase 1 of this project,” said Prof. Ramakrishna Rao.

“Urbanisation of small and Tier-2 towns is happening at a rapid pace. Specific urban issues confronting our main metros and bigger towns are not being addressed, especially Heritage Towns in the Indian context. This study therefore becomes a model for similar towns,” said Prof. Bandyopadhyay. 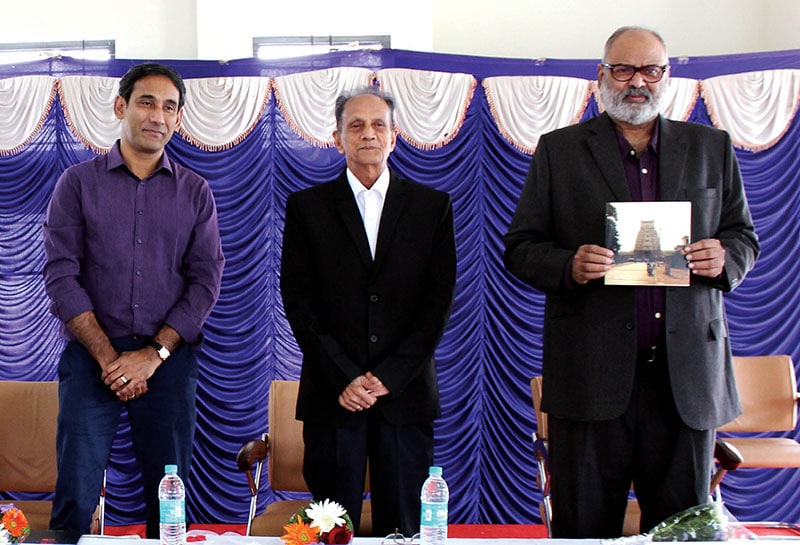 The study is not about conventional buildings of the type built by Tipu Sultan, the Scottish Cemetery, the Mosque or the Fort. “We picked up areas where there is no documentation but has a lot of historical significance. The first of this project was the Kashi Vishwanath Temple belonging to Bhairavi Trust, which is on Ashoka Road in Mysuru,” said Prof. Rao.

The land to set up the temple in the Gosai Ghat at Srirangapatna is located on the southern side of the island given to the Goswami clan nearly 400 years ago. The Goswamis hail from Varanasi and Kashi. Apart from Srirangapatna, Gosai Mutts are even established in Kashi, Pune, Varanasi and Mysuru. 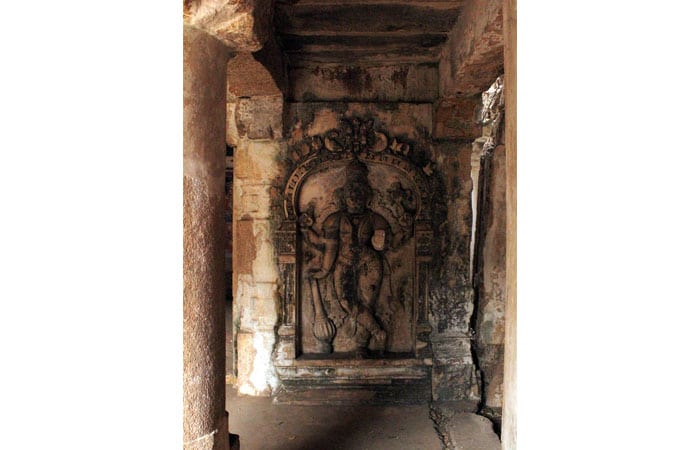 A sculpture in one of the temples.

Gosai Ghats are located on the Southern side of the island and are among the many neglected monuments at Srirangapatna though they are historically and architecturally important. Out of the two Gosai Ghats, the bigger one is Dodda Gosai Ghat (Kashi Vishwanatha Temple) and the Chikka Gosai Ghat (Tripura Bhairavi Mutt). 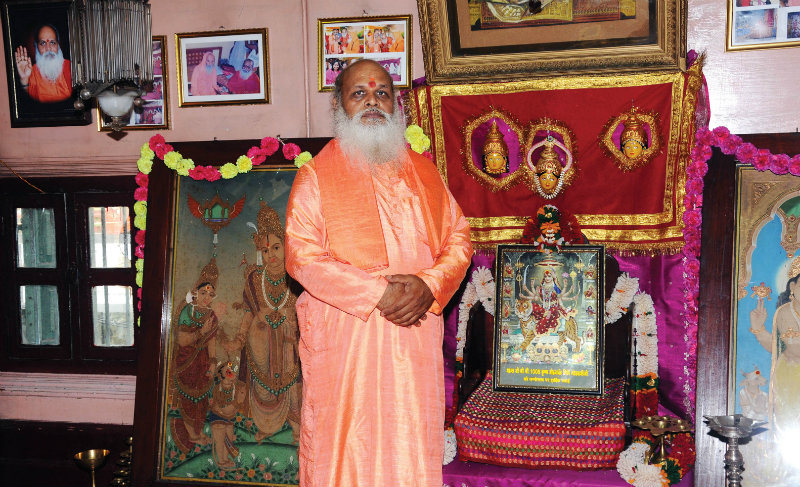 The Gosai Ghat at Srirangapatna was started by Swami Balaramgiri but only fully established by his successor Swami Maheshgiri. The settlement used to span across 10,000 acres but in 1964, the government took over their land leaving the owners with only the Chikka Gosai Ghat. The current Matadipathi (the head of the mutt) of the Gosai Ghat is Krishna Mohan Nandagiri who goes there every Monday morning, has a bath and performs pujas at one of the temples at the Ghat that is painted white.

“We studied the area and prepared a detailed actual drawing as to how it can be restored. This study is for documentation for records or information. This project is supported by the Overseas Development Authority of United Kingdom, which granted 5,000 GBP to MSA,” he said.

Since the Chikka Gosai Ghat still belongs to the Gosai clan, the Samadhi of every Swamiji from the clan can be found here. 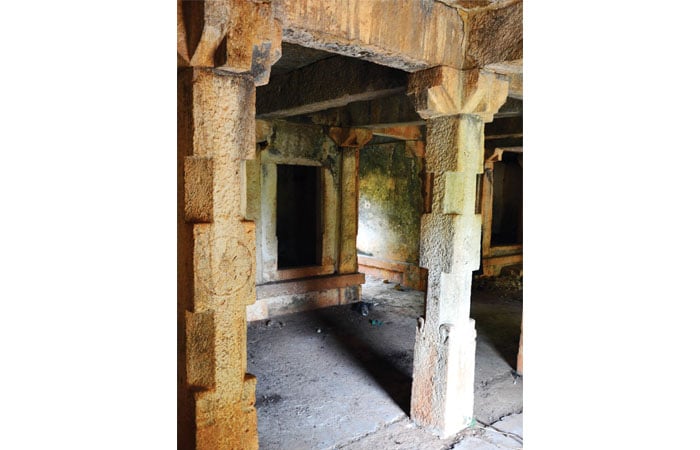 For the second phase of the project, the MSA got a grant of Rs. 3 lakh from “Smt. D. Rama Bai Charitable Foundation” from its CSR (Corporate Social Responsibility) fund. The second documentation involves drawings for implementation for which a blueprint will be provided.

The second study was done by the team from Liverpool along with MSA on the Gajendra Moksha Kalyani at the Ranganathaswami Temple realising its tremendous importance.

According to one of the priests at the Ranganathaswami temple who did not wish to be named, “When the Kalyani was built, water from around was channelled into it to keep it filled all the time. But this also meant that the nearby crocodiles would sometimes wander into it and cause fear among people. This resulted in the temple taking a decision to close the sluices. This in turn, resulted in the water stagnation, making it a breeding ground for mosquitoes. As a result, malaria epidemic broke out at Srirangapatna about 50 years ago. After the epidemic, the Kalyani was drained completely and has been defunct since then.” 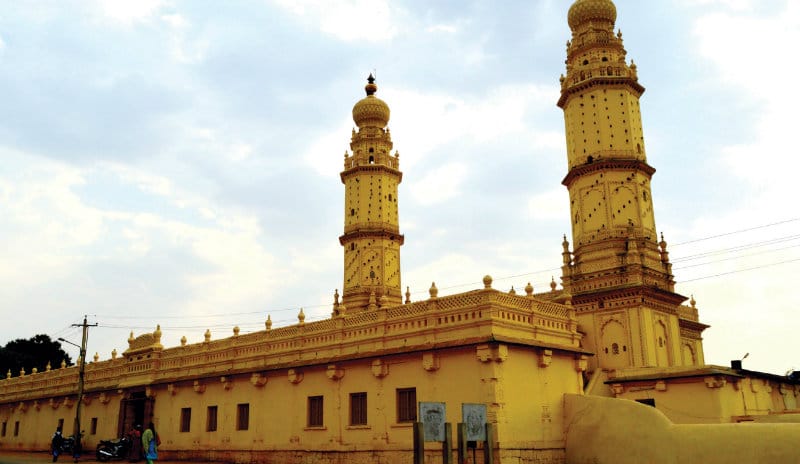 The third stage of the study that was done is of the Abandoned Ganjam Mutt in Ganjam area located right opposite another ancient temple which dates back to circa 1600 C.E. The Abandoned Mutt is in ruins now and is covered by wild vegetation. The area surrounding the mutt and the shelter by the road indicates that there might have been a settlement which once flourished here. “Detailed drawings of this Mutt with its temple plan have also been done,” said Prof. Rao.

Asked about the whether they were also studying the impact of development, Prof. Rao, said, “We are studying that also. The impact of six-lane highway on Srirangapatna, impact of new urban development, its closeness to Mysuru and it is slowly turning out to be ‘Bedroom Community’”

What is this Bedroom Community? “This is a typical American expression. This means they live in Srirangapatna and work in Mysuru or Bengaluru because the cost of living is lower in the Temple Town than in Mysuru,” he said.

Unless you set in proper rules and regulations, the possibilities of smaller towns like Srirangapatna deteriorating into any bigger town abutting a bigger city or agglomeration can happen. When you do the study you are identifying the areas, going into neglect and bring them back into mainstream. Therefore the land around is not neglected. 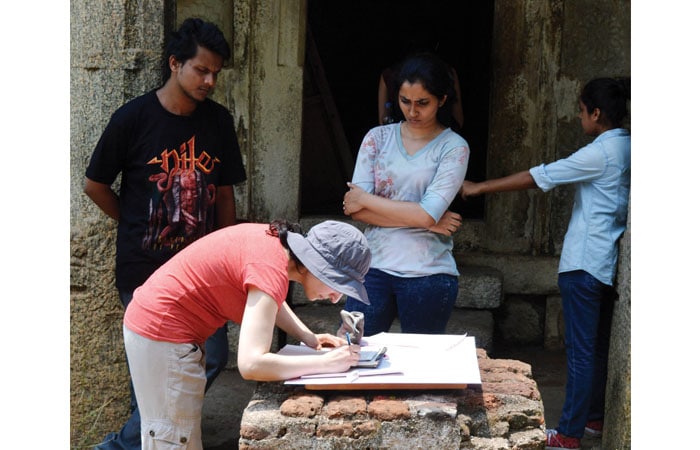 “Srirangapatna is a heritage town and we must protect it. We have to find funds to restore it. The MSA cannot do it as it does not have the wherewithal. There are organisations who fund it like Agha Khan Trust, Yes Bank, Tata Trust and Birla Trust to name a few,” he said and added that tremendous help and support was given to MSA by Divisional Archives, Mysore, Archaeological Survey of India and Indian Heritage Cities Network Foundation.

5 COMMENTS ON THIS POST To “Saving Srirangapatna: Documenting glorious past for posterity”