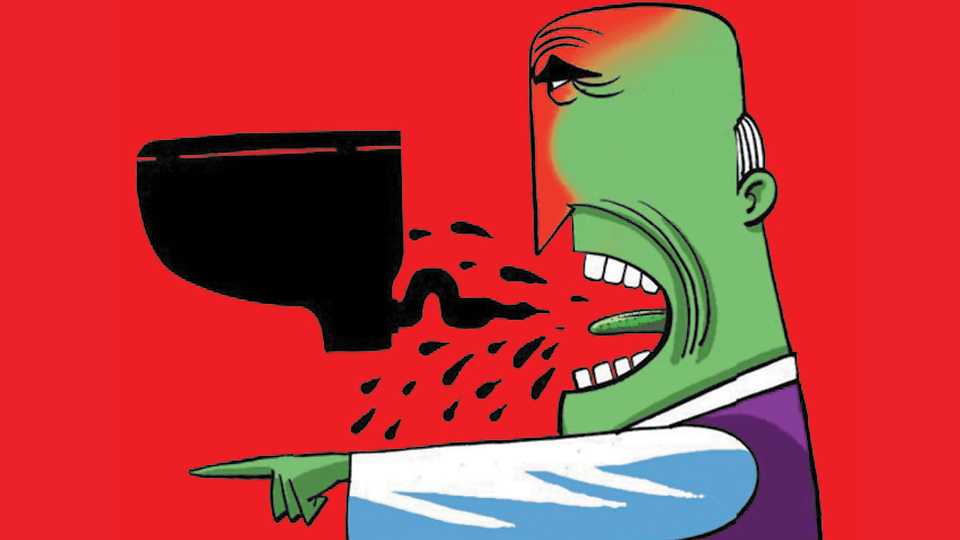 We wonder if people who attended the recently held Kannada Sammelana were closing their noses when its President Prof. Chandrashekar Patil spoke? Because our MP Pratap Simha informed us that every time Prof. Patil opens his mouth foul smell comes out. Many have disapproved the MP’s language, but it was Prof. Patil who instigated this kind of language and Pratap Simha rightly gave it back.

Being the President of the 83rd Akhila Bharata Kannada Sahitya Sammelana, Prof. Patil should have spoken about the future of Kannada literature and how it could be made viable. Instead he made it a political Sammelana making statements such as — “When there is talk of secularism people like Ananth Kumar urinate.” So Pratap Simha just gave it back. Metaphorically speaking, Pratap Simha is right; Prof. Patil had spoken like they say in English, a potty mouth — which is when someone uses foul language.

It is disappointing when public discourse is reduced to profanity. And it is happening more often these days. A few years ago we heard this in a press conference — “Bloody ba****d, does he have any shame? Bloody ba****d, who is he? This is the man who sent Shobha Karandlaje begging to my house to say that he will resign from BJP and join JD(S) if made a Minister. What is this nonsense?” These are not the words of a disgruntled party worker but that of the former Prime Minister — H.D. Deve Gowda.  This tirade was targeted at the then Chief Minister B.S. Yeddyurappa.

Then we heard this  — “They were in power for 34 years, but did nothing. Now they are trying to shove bamboos up the a** of those who are doing it.” This is not some angry bamboo worker from Bamboo Bazaar but the West Bengal CM, referring to the CPM.

READ ALSO  COVID Wedding and After

Over time, use of profanity in public has become common. We have forgotten to be civil to each other. Stand near any auto stand and you will hear the choicest curse words. Go to a 5-star hotel and have to hear both the Kannada and English version of the curses. Everyone seems to be cursing someone all the time.

Also most abuses are misogynistic as it’s targeted at a person’s mother or sister? They don’t even spare the grandmother. In our own “cultured” city, arguments almost always start with “Nimmajji” (your grandmother…) Or the standard “Nimmakkan” (your older sister). Wonder why they don’t go after the younger sister and say “Nimthangi.” One can only assume men in Karnataka have a thing for older women.

But cursing has its advantages. TIME magazine has reported that cursing is cathartic! It says it helps people deal with both emotions as well as physical pain. Oh! So that’s the secret of Delhiites’ ability to cope with pollution and Arvind Kejriwal — angrily scream that you want to have sex with someone’s sister.

But now curse words meant to vent frustrations have placebos — replace the bad word with a phonetically similar one. But can angrily screaming, “This is bull spit?” or “son of a bucket” or “I don’t give a Donald Duck” truly convey one’s frustration?

Bad words are like a bad habit, once you start using them it often becomes a part of your personality and sometimes you can get into legal trouble. Indian Penal Code Section 504 states that intentional insult with an intent to provoke is punishable with up to two years imprisonment and Section 294 states anyone who sings or says any obscene songs or words, in public, shall be punished with imprisonment! So don’t be a potty mouth in public, else you may go to prison and experience for real what you were cursing as you will become someone’s “Donald Duck.”

Cursing should be used like a medicinal or recreational drug; it’s fun and effective in controlled dosages. When sprinkled with humour, it’s a story enhancer but when used in aggression it’s vulgar and provocative.

Language is the base of our social fabric and good language tends to encourage good behaviour, more so for a person in public life.

Now, speaking of profanity: A man got a parrot for a pet. Soon he realised it was a foul-mouthed parrot who used profanities all day long.

So the owner locked the parrot up in a dark kitchen cabinet as punishment. The parrot continued to scream profanities. Frustrated, the man put the parrot in the freezer of the refrigerator, where he had also kept his frozen chicken to make chicken curry for the evening dinner.

Even in the freezer he could still hear the parrot screaming profanities but then it suddenly stopped. An hour passed; still there was no sound. The owner got worried that the parrot may have frozen. He opened the freezer. The parrot calmly hopped out and apologised for being foul-mouthed. The owner was happy but wondered what had brought about this transformation.

Then a few minutes later, the parrot, in a soft timid voice asked, “By the way master, what mistake did the chicken do?”