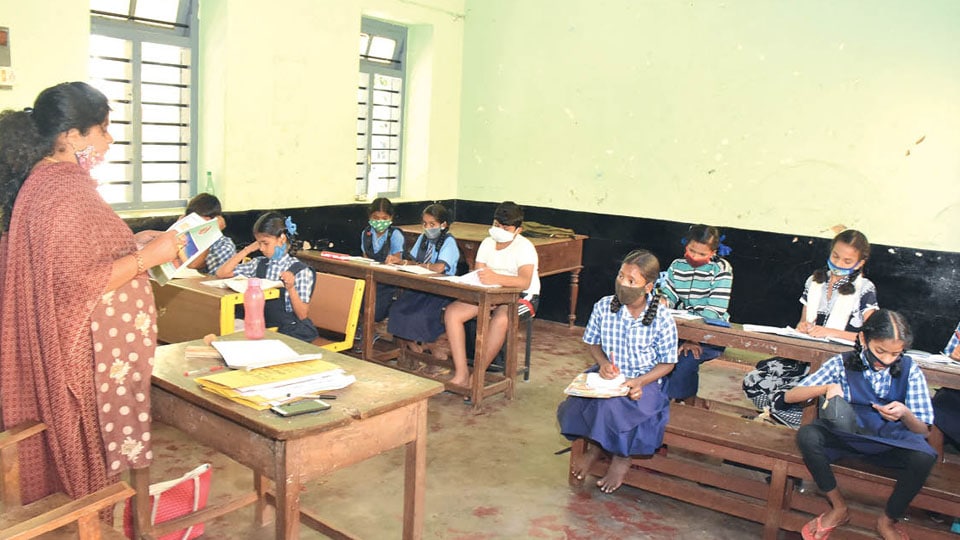 Physical classes in schools across the city and the taluk from LKG to Class X including residential, government, aided and unaided will remain suspended till further orders. The DC has instructed schools to conduct online classes for the students.

However, the order will not apply to schools in other taluks of the district as the DC has asked them to continue physical classes complying with the COVID-19 guidelines. Even anganwadi centres will remain closed until further orders.

In his orders, the DC has highlighted that of the 562 cases that were reported in Mysuru yesterday, 436 are from Mysuru city and taluk accounting for 77.58 percent. As a precautionary measure, the schools have been asked to suspend physical classes.

Meanwhile, 130 children below 18 years of age have tested positive for the virus and four of them have been hospitalised. The remaining children have been put under home isolation and their health is being constantly monitored, said District Health Officer (DHO) Dr. K.H. Prasad. Yesterday, of the 562 persons testing positive, 43 were children.

He said that the District Administration has taken all measures to ensure that the children get the best treatment and timely care in case the positives increase. Arrangements have been made at various hospitals including oxygenated beds and ICUs to treat children and as there is a fear that children will be most affected in the third wave, the administration is geared up, he added.

There have been no instances of mass outbreak in any of the schools in Mysuru, he said and added that people must not panic seeing messages on social media.

Meanwhile, as many as 860 children in the age group of 6 to 16 years have tested positive in the State, as per the data collated by the Department of Public Instruction (DPI). The department says that the number of infected children is only a small percent of the total population of children in this age group.

As per data made available by DPI, some districts have not reported even a single case of COVID-19 among children. “Our argument was very clear. We are not against the closure of schools where the positivity rate is high, but our request was to consider it taluk-wise,” an official said.

This is the reason why the Government has asked the officials not to take any risk of closing schools en masse and left it to the discretion of the DCs of the respective districts to take a decision on the closure of schools, based on the infection rate.

The Education Department will resume video classes on Doordarshan Chandana channel from Jan. 13. The classes will be telecast from 8 am to 6 pm (Monday to Friday) for Grades 5 to 9.