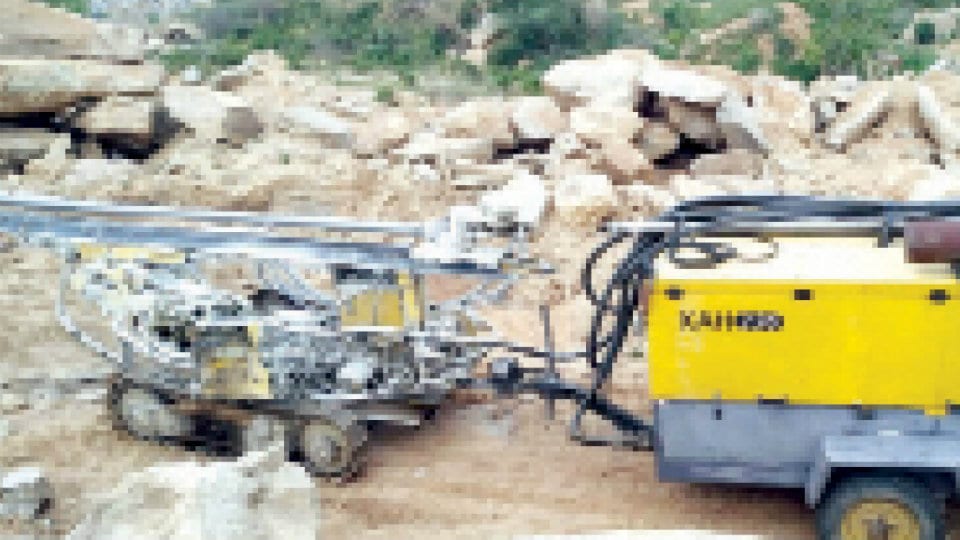 Mandya:  The High Court has ordered Mandya Deputy Commissioner (DC) Dr. M.V. Venkatesh to re-examin the ban orders on carrying out mining activities in areas surrounding 20-km from KRS. About 14 stone-crusher owners including Siddarameshwara and Ahalya Devi Crusher had filed a writ petition at the High Court against the ban orders imposed by the District Administration.

Earlier, the stone crusher owners had moved High Court and were successful in getting ‘C’ Form (Environment Clearance Certificate). But now the DC has gone against the permission granted and has passed the banning orders, the petitioners said.

The HC which took up the case for hearing has now issued permission for stone crushing to only those crusher companies with ‘C’ Form. However, the High Court has also ordered that except for stone crushing no other activities such as stone mining and blasting can be taken up. But it is alleged that despite ban on mining, illegal mining was being carried out rampantly in the area.

Currently, only 12-14 stone crushers with ‘C’ Form have been permitted to carry out crushing works and others having B(1) Form are permitted to assemble the crushers.

With no permission granted for the stone mining, it is a million dollar question as to from where would the crusher owners get the raw materials. It is believed that these owners are involved in illegal stone mining through which the raw material is supplied.

As per the High Court order, the District Administration has lifted the prohibitory orders (Sec.144 of IPC) imposed at the stone crushing sites in the KRS limits. However, the indefinite ban imposed on mining and other activities will continue, said Mandya DC Dr. Venkatesh.

Speaking to Star of Mysore, he said that the District Administration does not have issues with crushing activities being taken up outside 20-km of the KRS limits. However, they have not allowed carrying out any mining activities.

“The ban imposed within 20-km of KRS reservoir will not be lifted at any cost as there is threat to the dam’s safety,” he added.

The ban has been imposed from Sept.9 to Aug.8 by Srirangapatna Tahsildar Nagesh. The order has been passed in effort to stop the illegal mining being carried out Karighatta Forest Area in the taluk.

The residents of the surrounding areas had lodged a complaint with the Mines and Geology officials demanding them to impose ban on the mining activities. Following this, the District Administration imposed the ban.

It may also be noted that the mining activities have already been banned in Pandavapura taluk of the district.