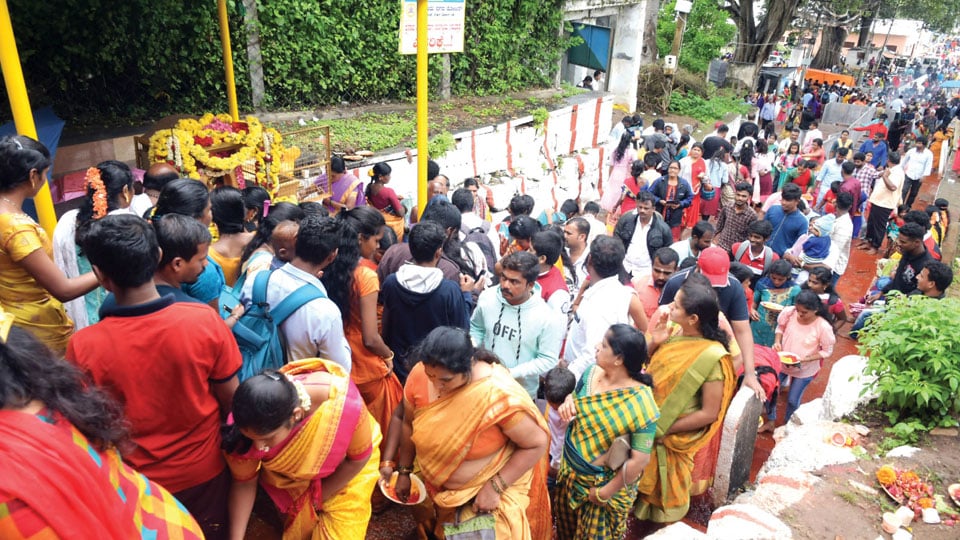 Mysore/Mysuru: Despite rains and cold weather, several devotees thronged Chamundeshwari Temple atop Chamundi Hill on the second Ashada Shukravara today to have darshan of the deity decorated with ‘Nagalakshmi Alankara.’

The special pujas and rituals associated with Ashada Shukravara began as early as 3.30 am. Several rituals like Mahanyasapoorvaka Rudrabhisheka, Abhisheka, various Archanas, Mahamangalarathi etc, led by Sri Chamundeshwari Temple Chief Priest Dr. N. Shashishekar Dixit were performed to the deity. Once the pujas were over, devotees were allowed darshan at 5.30 am.

There were separate queues for devotees paying Rs. 300 and Rs. 30 and Dharma Darshan queue which is a free entry.

Many devotees across the State visited Chamundi Hill on the auspicious day while several devotees climbed the hill steps as early as 12 am to reach Hill Temple and stood in queue overnight for early darshan.

As the District Administration had banned entry of all types of private vehicles to the Hill on Ashada Fridays, free bus facilities for all the devotees were arranged from Lalitha Mahal grounds to the Hill temple.

The RAT (Rapid Antigen Test) testing centres were set up at the grounds for quick testing of devotees sans vaccination. Several devotees returned disappointed as they failed to show vaccination proofs.

Police had installed barricades at Kurubarahalli Circle leading to Chamundi Hill Road and Chamundi Hill Arch to avoid private vehicles entering the Hill Temple. Those who had authenticated pass were allowed.

Speaking to media persons after offering puja, Yaduveer welcomed the Government’s decision to scrap the much opposed Ropeway Project to Chamundi Hill. “Chamundi Hill is not just a tourist spot but also a religious place which has its own significance. It is the Government’s duty to preserve our historic monuments, places and culture,” he said and urged the Government to take up necessary steps to conserve environment.