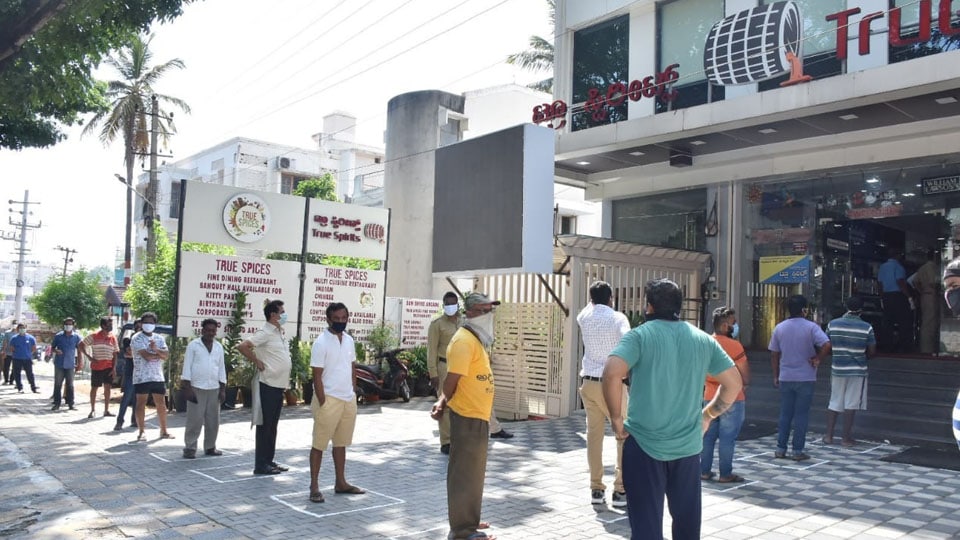 Mysore/Mysuru: After rationing their pegs for 41 days, people were seen lined-up outside liquor shops in Mysuru this morning. As liquor stores opened across the city — with the easing of lockdown restrictions in the third phase— booze-lovers ushered in the resumption of liquor sales in a spirited fashion.

At some places people queued outside liquor stores from 5 am. Liquor outlets had been shut in the State from Mar. 25 following the lockdown due to COVID-19 pandemic. Even before the shutters went up, people thronged stores at several places and made no secret of their celebratory mood.

According to Government orders, liquor stores are now going to remain open in Orange, Green and Red Zones (barring the Containment Zones) and only in standalone shops like wine stores and MSIL outlets are allowed to operate till 7 pm after which people cannot step out for non-essential commodities.

Stores have also been asked to ensure their customers practice social distancing and maintain a gap of 2 metres between each other. Photos and videos of people flocking to alcohol stores and queuing up outside the shops from the wee hours of the morning have been flooding social media. Netizens posted hilarious jokes and memes as visuals of the queues outside liquor shops. Several users also shared film stills to depict the scenario.

In most areas, people seem to have forgotten all about social distancing and the dangers of gathering in a public place. At a liquor outlet in Siddalingapura, Police had to resort to mild lathi-charge as people refused to follow social distancing norms and were seen standing very close to each other in the long queues.

Police, including the traffic cops, were hardly seen at signals and checkpoints after the lockdown was lifted today in non-containment areas and instead, they were found outside the 182 wine stores and 35 MSIL outlets managing the crowd.

A minimum of 150 to 200 people were found in front of each shop where boxes were drawn for the people to stand. At an outlet on D. Devaraj Urs Road, over 200 people were standing in a serpentine queue to buy liquor. Similar situation was witnessed on Chamaraja Double Road at a few liquor outlets.

Fearing that the stock might get over, people were hurrying to buy liquor. However, officials said that there was enough stock. Queues were witnessed in outlets at Vontikoppal, K.T. Street – some women were found standing in queues here – Ring Road Junction, H.D. Deve Gowda Circle, near Alanahalli Police Station, Bannur Road Junction, APMC Bandipalya Junction and on KRS Road.

Meanwhile at an outlet on Bengaluru-Nilgiri Road, the Police was forced to shut down a liquor shop due to overcrowding. Crowds gathered in huge numbers and refused to abide by the social distancing norms. Though boxes had been drawn in front of the shop and the Police were deployed to keep a tab, it didn’t help. Eventually, the shop owner downed the shutters and refused to open until and unless the customers adhered to the norms. The shop was opened only after they toed the line.