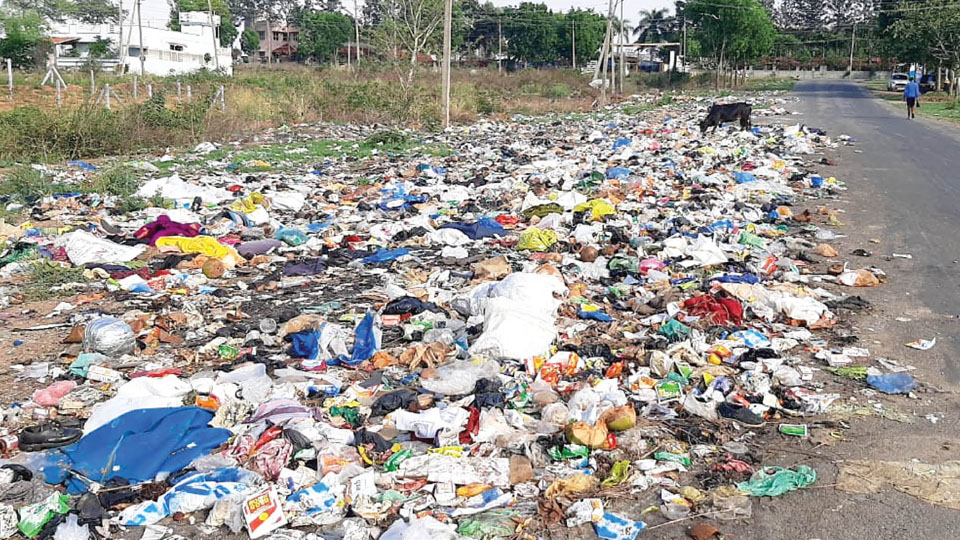 Mysore/Mysuru: In a sharp contrast to Mysuru’s honour of bagging the Cleanest City tag for two successive years just a few years ago, a Sewage Farm-like waste dumping spot has come up on the outskirts of the city, which has irked the residents.

Heaps and mounds of wastes, garbage and debris that have piled up around Bharath Nagar and Dr. B.R. Ambedkar Nagar, has made life a hell for the residents of both these localities, who are cursing the authorities for their apathy and negligence.

Bharath Nagar and Dr. Ambedkar Nagar, coming under Hanchya Gram Panchayat limits of Chamundeshwari Assembly segment, were jointly developed by Karnataka Slum Development Board and MUDA years ago. Now, most of the roads in these two localities are reeling under unbearable stench that emanates from the pile up of uncleared wastes   and garbage.

With the MCC and other civic agencies failing to collect and dispose off wastes, the  residents of the two localities, which has a large population of SC/ST and minority communities, are forced to live with heaps of wastes. The uncleared waste poses a serious health hazard to the residents, who are forced to cope with the stench that emanate from rotten wet wastes. The MUDA, which has developed Sathagalli Layout nearby, where  many posh houses have sprung up, too seems to have remained a  silent spectator.

With MCC and other local bodies failing to clear wastes, the people of  Bharath Nagar and Dr. Ambedkar Nagar, light fire to garbage heaps, which lie scattered along the roads, once in a week or a fortnight. The foul smell that emanates with the burning of plastics dumped along with wastes, has become unbearable for residents in the vicinity. Also, the toxic stench poses a serious health hazard.

Residents alleged that the MCC’s propaganda that it is working to make Mysuru a garbage-free city seems to be a farce, looking at the apathetic attitude of officials and people representatives. They sarcastically say that like the residents, the  officials and netas too should burn wastes here and ‘enjoy’ the stench that emanates from it.

Though most of the roads in Bharath Nagar and Ambedkar Nagar and surroundings are asphalted, most of these roads are covered with wastes and garbage, which is causing severe inconvenience to pedestrians and motorists alike. The heaps of waste also pose a threat to livestock and stray dogs, as they come in search of leftover food, thrown in plastic covers.

Residents said that there is no door-to-door garbage collection system in place in the two localities and also there is no specified waste dumping spots. As such, they are forced to dump wastes of their houses at spots where garbage are already found dumped. Besides, residents of surrounding localities, who come in two-wheelers and other vehicles, dump plastic bags containing wastes.

“We had ourselves cleared all the wastes a couple of times. But this is not enough. There is an imperative need for clearing of garbage and wastes on a daily basis. We can live with relief only if the authorities take some  urgent action  for  disposal of wastes,” they maintained.

MUDA  Zone-5 Executive Engineer Mohan said that MUDA has developed Dr. B.R. Ambedkar Nagar and Karnataka Slum Development Board has built houses under JnNurm in the locality, while  Bharath Nagar was developed by Karnataka Slum Development Board. MUDA had cleared wastes in Ambedkar Nagar a few times by engaging private agencies.

But MUDA itself has no waste disposal mechanism and the Slum Development Board too is not extending help. However, a permanent solution will be found to the waste problem in the coming days, he maintained.