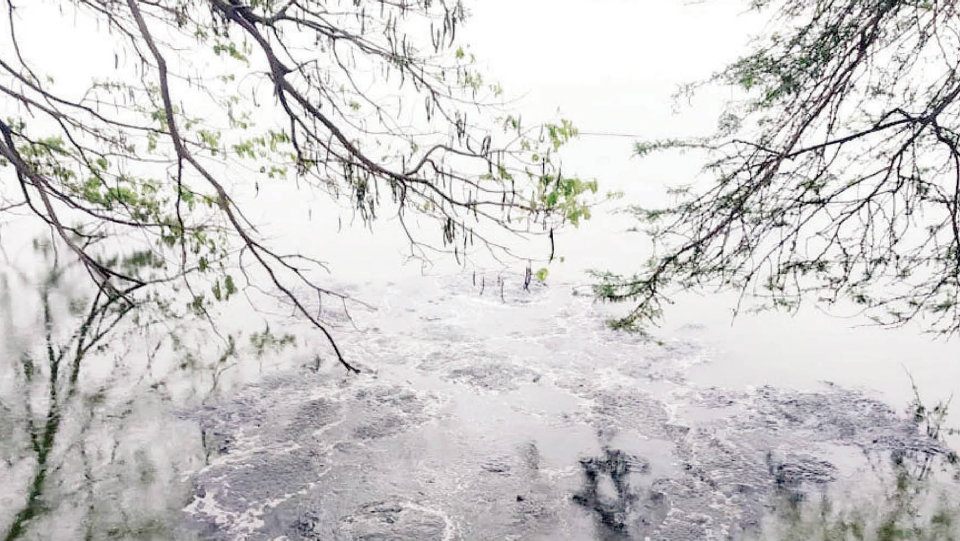 Mysore/Mysuru: A large quantity of sewage water is flowing into the pristine Kukkarahalli Lake, maintained by the University of Mysore (UoM) through the Magic Box from Paduvarahalli side yet again threatening the flora and fauna of the Lake.

Following unseasonal rains on Sunday night and Monday morning, a large quantity of rain water mixed with sewage water is flowing into the Lake and the morning walkers at the Lake, who noticed it, have expressed concerns about it.

They said that the flow of sewage water to Kukkarahalli Lake was stopped completely about two to three years ago and alleged that it was the staff who allowed the flow of rain water mixed with polluted water into the Lake last year following depletion of water level at the Lake.

Meanwhile, officials of UoM, who visited the spot, assured of taking necessary steps to stop the flow of sewage water into the Lake.

It may be recalled that in July 2019, Kukkarahalli Lake was emitting froth like the Bellandur Lake in Bengaluru. The froth was seen at the borders of the Lake washing ashore and following the shocking development, samples were collected and sent to Laboratories for tests.

Experts had often pointed out to a huge amount of sewage flow into the Lake due to the failure of Mysuru City Corporation (MCC) to manage the sewage of the city.  They pinpoint that the ubiquity of washing machines and indiscriminate use of detergent by households have come together to choke the Kukkarahalli Lake, threatening the lives of aquatic, land and bird species that thrive in the Lake precincts.