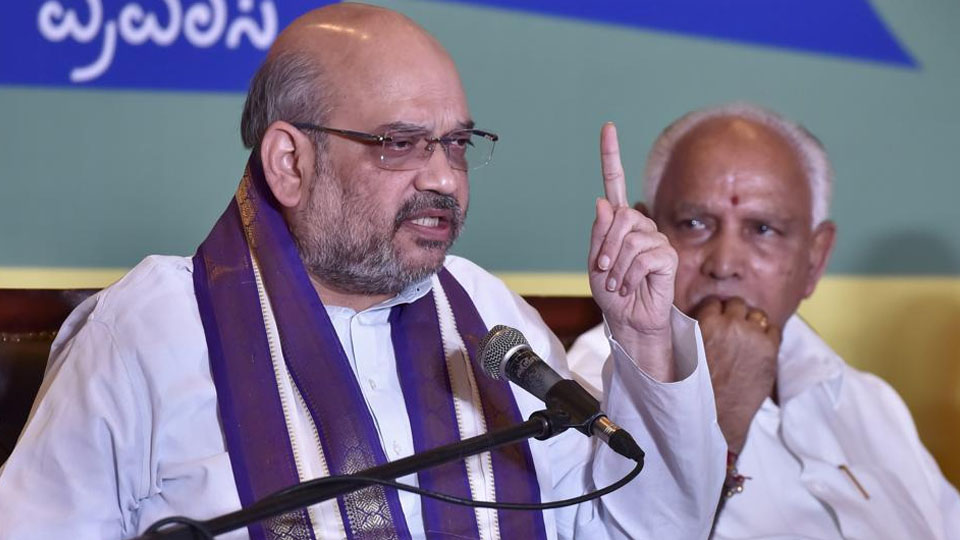 New Delhi:  Embarrassed by the fiasco in Karnataka, BJP President Amit Shah yesterday tried to put up a brave face and said the saffron party was in its legitimate right to stake claim for Government formation as people’s mandate was clearly against the Congress.

“This is not a confused mandate as is being portrayed. It is a decidedly anti-Congress vote. That is why we say that the Congress has entered into an unholy alliance with the JD(S). The Congress has found a new way of portraying defeats as victory, portrayals which have nothing to do with the ground reality.”

The BJP Chief wondered what was Congress was really celebrating as its numbers dropped from 122 to 78.  Similarly, he said, JD(S) was rejoicing its victory in only 37 seats. “Only Congress and JD(S) are celebrating — people of Karnataka are not,” Shah added.

Refusing to speculate on how long the coalition would last, Shah said, “Kumaraswamy has a lot of faith in astrologers. I also believe in them, but feel that democratic processes have their own              time and pace.”

To a question, he said there was nothing wrong in staking claim for Government formation and the BJP would have sailed through trial of strength had not Congress put their MLAs ‘’locked’’ in a hotel.

‘’Had these MLAs got in touch with their own people or even staged victory march, the common people would have asked them to vote in favour of the BJP,’’ he said.