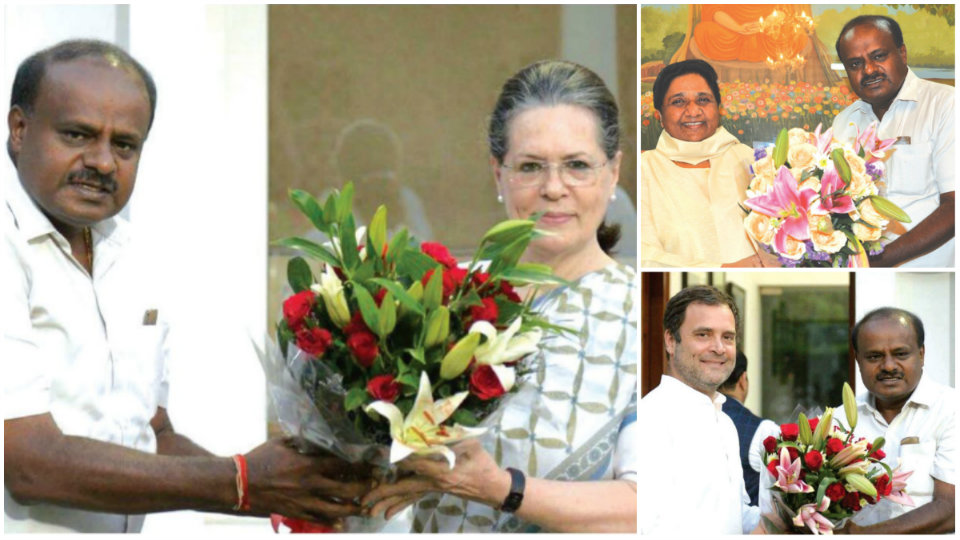 New Delhi:  Fast-pacing the process of Cabinet formation in Karnataka, the Chief Minister-designate H.D. Kumaraswamy (HDK) yesterday met Congress President Rahul Gandhi and his mother and UPA Chairperson Sonia Gandhi and got their clearance. Kumaraswamy touched Sonia Gandhi’s feet in a gesture of gratitude for supporting the JD(S).

Kumaraswamy said that both Sonia Gandhi and Rahul Gandhi will attend the swearing-in ceremony tomorrow. At the meeting with the Gandhis, though the leaders did not go into the nitty-gritty of government formation, Rahul asked Kumaraswamy to leave the post of the Speaker for the Congress. Kumaraswamy gave his consent.

“I wanted to show my respect and regards to Gandhi family. I requested them for attending the oath-taking ceremony on Wednesday. Both of them agreed to be present,” Kumaraswamy said. He further said: “It was a good meeting. Rahul cleared the initial modalities and asked Venugopal to discuss all the concerned matters,” he said.

After interacting with Kumaraswamy, Congress President Rahul Gandhi tweeted, “I had a warm and cordial meeting this evening, in Delhi, with Kumaraswamy. We discussed the political situation in  Karnataka and other matters of mutual interest.”

“I will be attending his swearing-in as the CM of Karnataka, on Wednesday, in Bengaluru,” Gandhi wrote in the micro blogging site confirming his attendance at the oath-taking ceremony.

Earlier in the day, Kumaraswamy also met BSP Supremo Mayawati in Delhi as her party is a pre-poll alliance partner with JD(S).

No differences of opinion: HDK

In Hassan, Kumaraswamy said that his party, the JD(S), had no differences of opinion with coalition partner Congress over distribution of portfolios. “The issue is created by a section of the media. I have been following the hate messages spreading on social media. I will give them an answer in a few days,” he said.

He was speaking to reporters before visiting several temples in his home district and offering special puja to the deities, along with his family members. “Managing the Chief Minister’s post is a challenge. I will discuss the issues with the leaders about the functioning of the Government. I will resolve the people’s problems,” Kumaraswamy said.

He said, he will take all Congress leaders into confidence to ensure a stable Government.