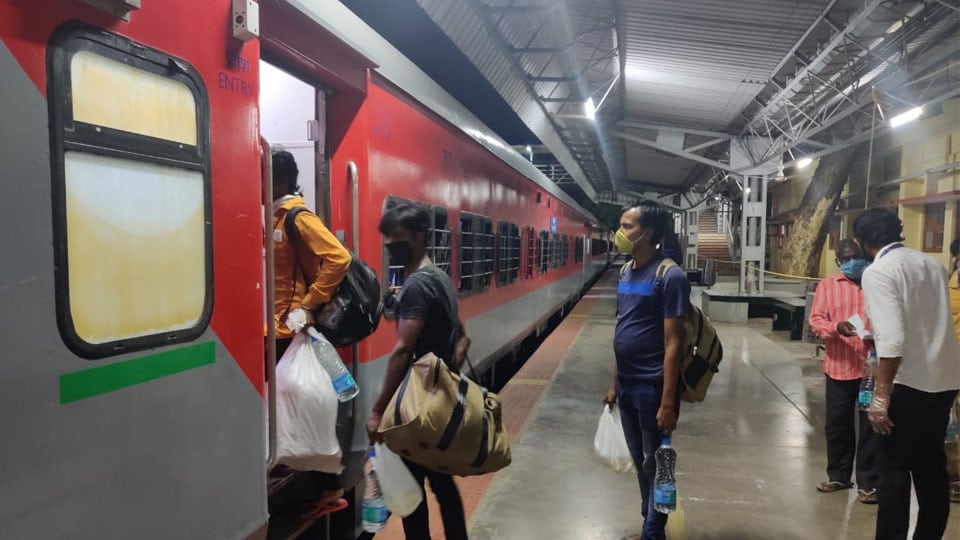 Shramik Special with 1,250 passengers leaves for Bihar from Mysuru

Mysore/Mysuru: As many as 1,250 registered migrants from Mysuru boarded the Shramik Special at Ashokapuram Railway Station (Mysuru) operated by the Railways today at the behest of the State Governments of Bihar and Karnataka.

This special train comprises 20 coaches, including 18 Sleeper and 2 General Second Class providing accommodation for 1,250 passengers. This train is scheduled to reach Purnea in Bihar at 06:00 hrs on Saturday (May 23). The train’s journey is from point to point and as such, no one will be allowed to board or alight at en route stations where it stops for operational reasons.

The Mysuru-based Rotary Heritage Club made arrangements for providing packed dinner and water to all the passengers. The Indian Railway Catering and Tourism Corporation (IRCTC) is making arrangements for serving food to the migrants as per a time-table till this train reaches the destination station through coordination with Railway Divisions concerned.

The passengers were screened by the District Health Department Officials as per the Standard Operating Procedures (SOPs). The Railway, on its part, has assisted the passengers in occupying their seats onboard offering them the Dos and Don’ts during the journey. The importance of personal hygiene has been stressed and wearing of face masks has been made compulsory. The train was fully sanitised as per standard protocols before allowing the passengers inside the coaches.

Six Railway Protection Force (RPF) personnel will be escorting the train, end to end, and will be coordinating with Railway Police/Civil Police in the respective States in the route of the train to efficiently deal with any law and order or safety issues.

Senior Mysuru Division Railway Officials were present at Ashokapuram Station to ensure hassle-free implementation of all procedures connected with running of Shramik Specials by the Railways.

With this the number of trains dispatched from Mysuru Division goes up to 6 and the number of migrants transported to Uttar Pradesh and Bihar to nearly 10,500.

The State Government’s request for arranging the train was made only around 15:00 hrs today. Despite very short notice, the Railways have provided the fit and operationally-ready rake after getting it completely sanitised as per standard protocols, stated a press release from Priya Shetty, Divisional Commercial Manager and PRO.