Home » Elections 2018 » Siddharamaiah has his way, will contest from Badami too 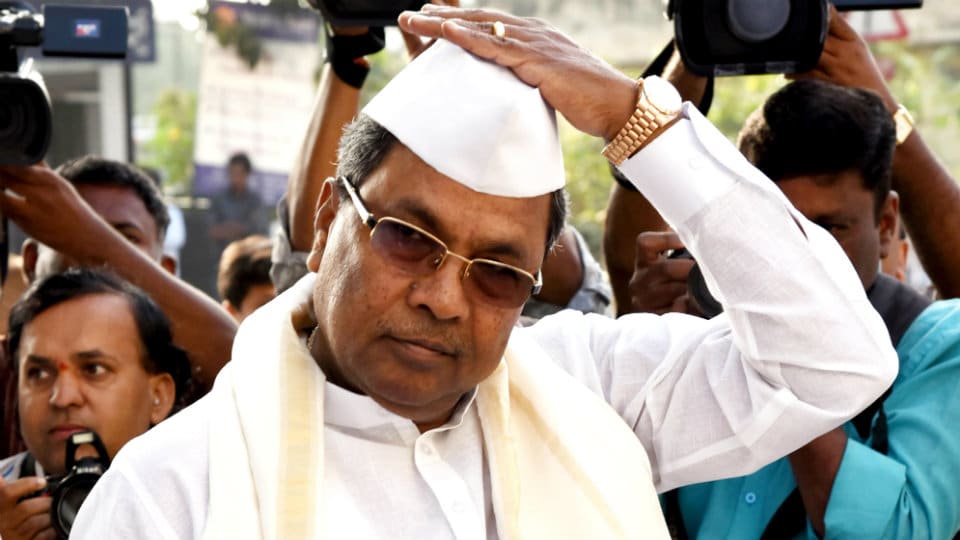 Siddharamaiah has his way, will contest from Badami too

Bengaluru: After days of uncertainty and opposition from within the party, Chief Minister Siddharamaiah appears to have prevailed. Apart from Chamundeshwari, he will take the electoral plunge from Badami in Bagalkot District. The CM is set to file his nomination papers from the constituency on Tuesday (Apr.24)

The decision comes after much dilly-dallying but the suspense on Siddharamaiah’s candidature f0rom a second seat for the May 12 Assembly polls ended with CM’s media unit sending a message that he will be filing his nomination papers between 2 and 3 pm on Tuesday in Badami.

Interestingly, there was no official announcement from the Central Election Committee of the AICC, the party’s deciding body on elections, about Siddharamaiah’s candidature from Badami.

In giving Siddharamaiah the green signal much against the wishes of seniors in the party, including Mallikarjuna Kharge, the Congress High Command is seen as bending over backwards to accommodate the CM. His son Dr. Yathindra has been given a ticket from Varuna constituency adjoining Chamundeshwari and the CM has managed to get tickets for most of his loyalists. In return, say sources, Siddharamaiah is now expected to deliver and ensure the Congress romps back to power.

Siddharamaiah has already filed his nomination papers from Chamundeshwari seat in Mysuru district, where is he is facing stiff competition from G.T. Devegowda of the JD(S). It was this fear of a tough fight that is said to be the main reason for Siddharamaiah to scout for a second seat. Sources said that AICC General Secretary K.C. Venugopal was keen on Siddharamaiah contesting both constituencies as Chamundeshwari may not be smooth sailing — also evident from the CM uncharacteristically devoting most of his time to the constituency. Siddharamaiah, who has been cagey about his candidature from Badami, will file his nomination between 2 pm and 3 pm. Meanwhile, Badami could witness a straight fight between the two Chief Ministerial candidates with BJP National President Amit Shah floating the idea of party State Unit Chief B.S. Yeddyurappa contesting from the constituency.

As news trickled in of the Chief Minister heading for Badami, BJP leaders went into a huddle. Party sources said Bagalkot MP P.C. Gaddigoudar and former MP Vijay Sankeshwar, both Lingayats, were being considered. MP and ST leader B. Sriramulu is also being seen as a contender. He might be shifted from  Molakalamuru.

Sources said the BJP leadership may go in for a Lingayat candidate as the community is in a huge number in the constituency, along with Kurubas. There is also talk of a surprise candidate who may be fielded.

3 COMMENTS ON THIS POST To “Siddharamaiah has his way, will contest from Badami too”